The progressive personal, corporate and indirect tax rates in the country compel people to evade tax and accumulate black money 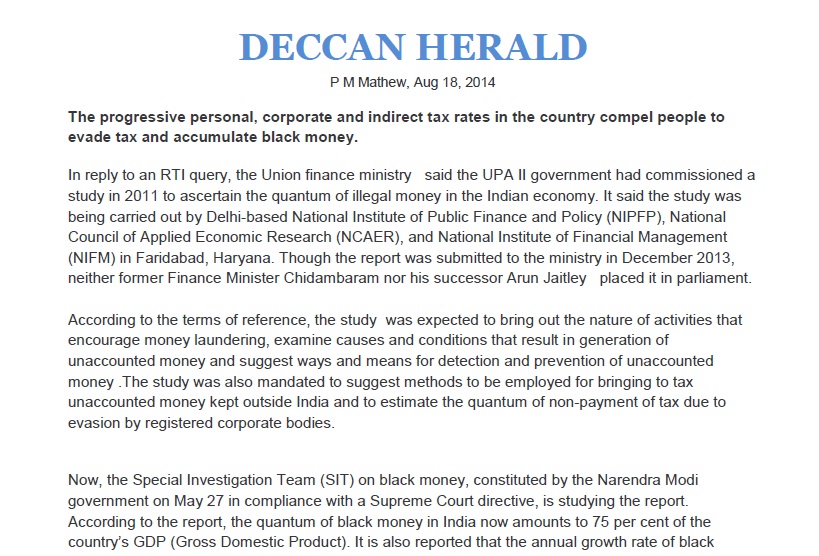 In reply to an RTI query the Union finance ministry   said the UPA II government had commissioned a study in 2011 to ascertain the quantum of illegal money in the Indian economy. It said the study was being carried out by Delhi-based National Institute of Public Finance and Policy (NIPFP) National Council of Applied Economic Research (NCAER) and National Institute of Financial Management (NIFM) in Faridabad Haryana. Though the report was submitted to the ministry in December 2013 neither former Finance Minister Chidambaram nor his successor Arun Jaitley   placed it in parliament.

According to the terms of reference the study  was expected to bring out the nature of activities that encourage money laundering examine causes and conditions that result in generation of unaccounted money and suggest ways and means for detection and prevention of unaccounted money .The study was also mandated to suggest methods to be employed for bringing to tax unaccounted money kept outside India and to estimate the quantum of non-payment of tax due to evasion by registered corporate bodies.
Now the Special Investigation Team (SIT) on black money constituted by the Narendra Modi government on May 27 in compliance with a Supreme Court directive is studying the report. According to the report the quantum of black money in India now amounts to 75 per cent of the country’s GDP (Gross Domestic Product). It is also reported that the annual growth rate of black money is higher than the annual growth rate of GDP.
The generation of black money in India is driven mainly by the higher education sector real estate deals and mining income. As per the report real estate deals top the list followed by the black income generated by those mixing PDS kerosene with diesel and capitation fees collected by professional colleges.
An integral part of most third-world and many first-world economies black money refers to the money generated from underground economic activities like drug trafficking illegal weapons trading terrorism prostitution and selling counterfeit and stolen goods. The genesis of black money is from untraceable and hence untaxable business dealings that are not reflected in a country’s GDP computations. It is the result of cash based system in which transaction records are kept in secret account books. The Wanchoo Committee in its report in 1971 described black money as a “cancerous growth in the country’s economy which if not checked in time will surely lead to its ruination”.
The capital gains on real estate is the most important source followed by large scale manufacturing film industry smuggling and under/over invoicing of foreign trade. Black money surfaces in the parallel economy and is mainly used in land deals gold purchases and corruption.
Earlier estimates on quantum of black money range between $ 500 billion to $ 1400 billion. A study by Global Financial Integrity has estimated the illicit money outflow to be $ 462 billion. In February 2012 the CBI director had said that Indians have $1500 billion of illegal funds in secret bank accounts located in foreign tax havens. According to latest reports India has received 24085 data on tax evasion and dubious funds stashed abroad in financial year 2013-14.
Evading tax
The progressive personal corporate and indirect tax rates in the country compel people to evade tax and accumulate black money. Many professionals like doctors advocates and chartered accountants hide their real income and escape from taxes ranging from 50 to 70 per cent. According to the report just 1.8 per cent of registered legal professionals file tax returns including just 6.7 per cent of registered chartered accountants 42.8 per cent of registered medical professionals and 35.2 per cent of nursing homes. As Benjamin Franklin said “Nobody is a gentleman in the matter of payment of tax.” The FDI route is being used for taking black money out and bringing it back into India. In 2011 unrecorded foreign assets worth $89190 million were accumulated in India.
The country needs to go after corrupt officials as well as business monopolies and initiate genuine campaigns against corruption. Last year’s trial and punishment of high profile Chinese politician Bo Xilai and several other corrupt officials in China are examples of genuine initiatives to fight corruption and black money.
The one time option of Voluntary Disclosure of Income Stream(VDIS) to encourage Indians to bring back black money stashed abroad has had limited success. We have several legislative and regulatory measures to control black money. The public servants in India can be penalised for corruption under the Indian Penal Code 1860. Prosecution section of the Income Tax Act 1961 Foreign Exchange Management Act Prevention of Money Laundering Act 2002 Prevention of Corruption Act 1988 the Benami Transactions (Prohibitions) Act 1988 and the Corrupt Public Servants (Forfeiture of Property) Bill 1999 are all powerful legislation existing to curb black money. What is required is the necessary political will for the effective implementation of these legislation and regulations.
Unconventional measures such as compulsory bank account deposits of cash sales by even petty shop owners co-ordinated functioning between sub-registrar offices sales tax and service tax departments with the Income Tax Department to ensure that there is no mismatch between transactions conducting audit for sub-registrar offices for differences in the value registered for the properties in the same locality fixing limits for cash sales receipts and payments in cash demonetising higher denomination currencies and inserting new higher denomination  currencies with chips to  track through GPS the bulk transport and exchange of such currencies etc could help reduce the genesis and circulation of black money  in the economy.  Besides setting up the SIT the new government at the Centre seems to be serious about checking cross border tax evasion and tax frauds. What is immediately required is strict actions under the already existing direct tax laws.
(The writer is professor of economics at Christ University Bangalore)
Published in:  Deccan Herald, August 18, 2014
Download