The politics of perceptions 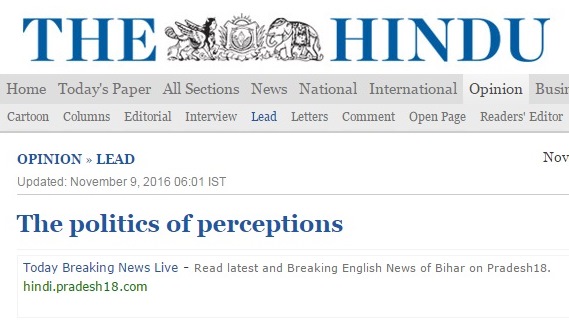 Material change matters but perception too determines a feeling of deprivation. Prosperity good governance and a focus on fairness rather than electoral pandering often elicit greater political support

Public discontent is like a chameleon. When we see it we know it must have been hiding in plain sight for a while; but until we spot it we are not even aware of its existence. Until Donald Trump catapulted onto the American political scene it would have been hard to imagine poor workers uniting behind a billionaire who has specialised in taking advantage of the system to avoid paying taxes and fair wages to his employees. Similarly no one took Brexit seriously until election results tapped into lower-class discontent among the British voters. It would be easy for us to say that poverty and declining economic conditions lead to frustration among the poor and revolt against the political elites. But is it really true?

India and Pakistan — a contrast

Poverty in Pakistan fell from nearly 35 per cent in 2001 to 10 per cent in 2013-14. Although Pakistan has recently adjusted its poverty line increasing the poverty ratio to 30 per cent as Ghazala Mansuri of the World Bank notes by all objective standards even the poorest in Pakistan are better off today than a decade earlier. Paradoxically according to the Pakistan Social and Living Standards Measurement Survey about 21 per cent of the households felt that their economic condition had declined over the preceding 12 months while only 12 per cent felt it had improved. India has experienced a roughly similar magnitude of poverty decline from 37 per cent in 2004-05 to 22 per cent in 2011-12. However as the India Human Development Survey (IHDS) organised by researchers from the University of Maryland and the National Council of Applied Economic Research (NCAER) found the proportion of households that felt that their economic condition declined between 2011-12 and 2004-05 was much smaller (about 10 per cent) compared to those who felt it had improved (about 37 per cent).

How do we explain that with similar economic improvements the Indians perceived that their fortunes were improving while the Pakistanis did not? Could this be because there was greater income inequality in Pakistan than in India making individuals keenly aware of their relative rather than absolute poverty? Empirical data does not show that Pakistan was more unequal. World Bank data show that in 2011 42 per cent of the income was held by the top 20 per cent of the population in Pakistan; the comparable figure for India was 44 per cent. At the bottom of the distribution too Pakistan seems marginally better with 9.4 per cent of the income in the hands of the bottom 20 per cent for Pakistani versus 8.3 per cent for India. This suggests that inequality in Pakistan and India was more or less on a par with Indian inequality being marginally higher. Clearly something else was going on something that related to perception a subjective feeling of deprivation rather than objective conditions.

My guess is that this sense of economic deprivation is closely linked to the social and political conditions in which individuals live. Living in a society that is well governed creates a sense of security that is equally if not more important than actual economic advancement. This is where India probably has an edge over Pakistan.

&While lack of comparable data do not allow us to compare Pakistan with India on these subjective factors the IHDS data suggest that at least within India experience of bad governance and grievances about fair treatment shape a feeling of economic marginalisation. Using data from the IHDS the only large panel survey in which the same households were interviewed in 2004-05 as well as 2011-12 we found that even after we took into account objective changes in income and factors such as education and place of residence the nature of governance and social policies played an important role in enhancing or diminishing feelings of economic insecurity.

Physical insecurity spills over into feeling economically insecure. Individuals who have been victims of crime — theft break-in or intimidation — are far more likely to feel that they are downwardly mobile. After we took into account income changes over time and the household’s education as well as place of residence crime victims in the IHDS were about 56 per cent more likely to feel economically worse off in recent years than non-victims. Good public service delivery also created a feeling of well-being. Households that experienced frequent power cuts and did not have power supply for at least 18 hours in a day were 43 per cent more likely to express a feeling of economic insecurity than those who enjoyed consistent power supply.

Fairness and prosperity
A sense of fairness in economic outcomes is also strongly related to perceptions of prosperity. In recent years we have seen an upsurge in the grievances expressed by forward castes who feel that the Other Backward Classes (OBC) are unjustifiably stealing their jobs and
opportunities for college admission. Holding household economic status and education constant forward castes were about 30 per cent more likely to feel that they were worse off in 2011-12 than in 2004-05. In this case it is not surprising that we see greater demand for OBC classification from well-off groups such as Jats Patels and Gujjars.

This is not to suggest that material changes don’t matter and perception alone determines a feeling of deprivation. The IHDS found that after controlling for other factors households whose incomes declined by at least 20 per cent in constant terms between 2004-05 and 2011-12 were 35 per cent more likely to feel that they are worse off compared to those whose incomes stayed the same and 51 per cent more likely than households whose incomes grew by 20 per cent or more. However the magnitude of the impact of actual economic decline on subjective feeling of deprivation was on a par with the governance and fairness concerns enumerated above.

American sociologist Andrew Cherlin notes that a feeling of relative deprivation is what shapes the support for Mr. Trump. Lower class whites acutely feel the loss of privilege their parents enjoyed in a bygone era where black-white differences were large and being white brought greater rewards while the African-Americans were shut out of good jobs. With declining premium of whiteness these same individuals feel beleaguered and support the Republican presidential candidate who capitalises on anti-immigrant and anti-black feelings.

Trust as a defining factor

These results suggest that prosperity good governance as well as focus on fairness rather than electoral pandering are likely to bring rewards in the form of political support and increased confidence in government. India may well be doing well on these compared to Pakistan at least if we judge by the feeling of economic prosperity among the population but it is of small comfort. When 57 per cent of the population holds an unfavourable opinion of political institutions it is time to re-evaluate what can be done to increase this confidence. If not for the sake of the nation then in the interest of political survival. The difference in confidence in the political system between those who feel they are doing economically well and those who feel left behind is relatively small; but in a climate of political disenchantment this small difference is perhaps enough to create an electoral tsunami.

Sonalde Desai is Professor of Sociology at University of Maryland and Senior Fellow NCAER. Views are personal