The elusive quest for freedom 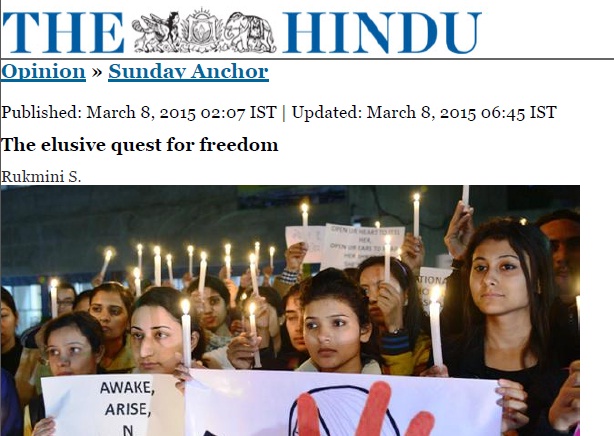 The following article in The Hindu by its the National Data Editor Rukmini S features important evidence gathered from the India Human Development Survey (IHDS) conducted periodically by NCAER in collaboration with the University of Maryland. IHDS is India’s only national longitudinal panel data set and provides considerable opportunities for researchers to generate high quality relevant evidence to inform sound policymaking.

Having opened up a fresh conversation about the situation of women since the December 16 2012 gang rape has India done enough to address the roots of the hostile atmosphere it has created for women? While the rates of sexual violence in India — both reported in official statistics and unreported on the basis of household surveys — are towards the lower end of the global spectrum data on women’s autonomy in India indicate that there is a hidden emergency.

Women’s freedom and autonomy is less well studied than crime rates but some studies offer an insight. Through its nationwide large-sample India Human Development Survey (IHDS) the National Council for Applied Economic Research (NCAER) sheds light on the lack of women’s financial independence. The 2011-12 round of the IHDS found that less than 20 per cent of women had their names on their house’s papers just half had their names on a bank account and just 10 per cent could take primary purchase decisions for the house.

A U.N. Women-Landesa study in Andhra Pradesh Bihar and Madhya Pradesh found that just one in 10 women whose parents owned agricultural land inherited any nearly 10 years after the Hindu Succession Act was amended to give sons and daughter equal inheritance rights. The majority of men interviewed for the study said that they were opposed to their sisters or daughters inheriting land.

The IHDS was able to capture the severe constraints put on women’s movement and autonomy. Sixty per cent of women respondents both Hindu and Muslim said they practised some form of purdah or ghunghat; this proportion rose to 96 per cent in Rajasthan and 91 per cent in Bihar and was the lowest at six per cent in Tamil Nadu. Eighty-one per cent of women said that they needed permission to go to a health centre and one-third said that they were not permitted to go to a health centre alone. These numbers had not improved since 2004-05 when the first round of the IHDS was conducted.

Less than 20 per cent of women knew their husbands before they got married and 40 per cent said that they had no say in their own marriage. Dowry or bride price was still rampant and families paid an average of Rs. 30000 in cash in addition to 40 per cent giving expensive gifts such as cars and two-wheelers.

India has among the world’s lowest levels of female labour force participation — the proportion of working-age women who are either working or looking for work. Of 131 countries India ranked 11th from the bottom in terms of women’s workforce participation in 2010 with Pakistan and Afghanistan among the countries doing worst say data analysed by Steven Kapsos an economist with the Employment Trends Unit of the International Labour Organisation. Between 2004-05 and 2009-10 labour force participation rates declined sharply and rose only slightly again in 2011-12; according to the latest numbers less then 25 per cent of rural women and 15 per cent of urban women were in the workforce.
Mr. Kapsos and his colleague Andrea Silberman say the decline in women’s employment in India is for the most part explained by “occupational segregation” — the concentration of women in certain sectors of the economy. They say women are under-represented in the booming sectors of the economy and over-represented in those that are not adding many jobs. In eight of the 10 sectors that added the most jobs over the past 15 years they found that women’s share of this employment growth was less than a third. In the other two — teaching and crafts — it was higher but still less than half.

If political decisions on women’s autonomy are to be taken they will be taken by a deeply male political establishment. The 16th Lok Sabha has the largest ever number of women MPs but at 62 they still form just 11 per cent of the Lok Sabha MPs. Eight of the 66 Ministers in the Narendra Modi-led government are women and women Ministers make up 23 per cent of the Cabinet.

Despite large increases in women’s share of the electorate and of voters over the past 50 years documented by economists Mudit Kapoor and Shamika Ravi of the Indian School of Business Hyderabad women’s political representation in the States remains low; less than 10 per cent of the MLAs across States are women Bhanupriya Rao an open data activist found.