The Economic Times: NCAER lowers India GDP growth forecast for this year to 5% 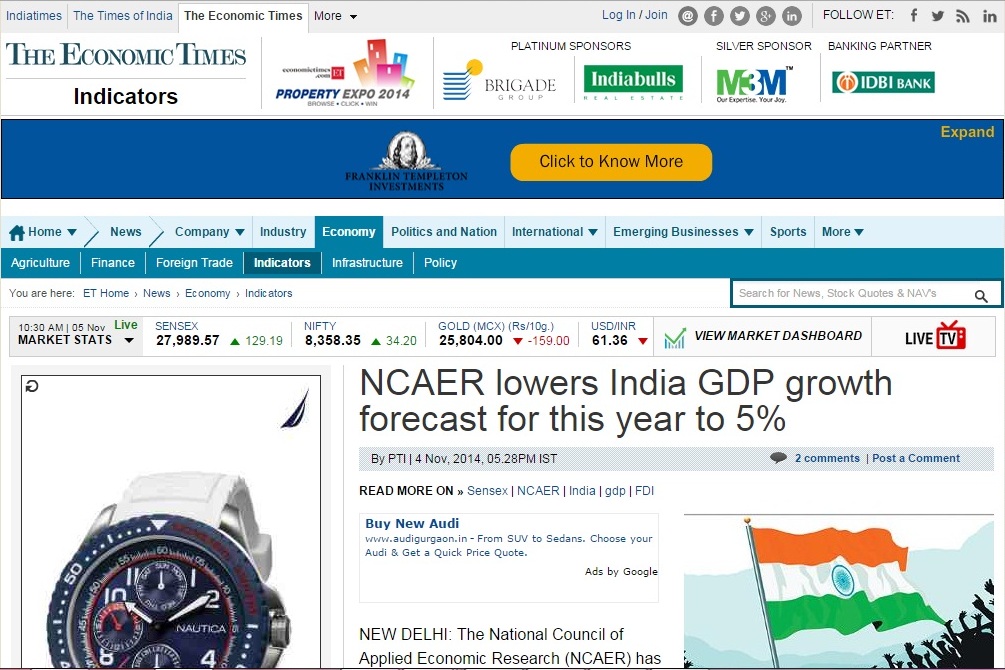 NEW DELHI: The National Council of Applied Economic Research (NCAER) has lowered India’s GDP growth forecast to 5 per cent in the current financial year on weak economical fundamentals and uncertainties in growth prospects.

The economic think-tank in its earlier projection had suggested that the Indian economy was likely to grow at 5.7 per cent in 2014-15.

“NCAER is predicting a slower growth for the economy unlike other forecasts. The fundamentals of the economy remain weak with uncertainties prevail. The only redeeming feature is the weakening of inflation and FDI inflows.

“Whether that will help us revive our growth prospects will depend on a number of factors including revival of the external economy and the extent of damage on agriculture due to deficit rainfall” it said in a release today.

NCAER said that the overall economy is looking weak with uncertain growth prospects.

“The economy is giving mixed signals. On one hand we had the Sensex reaching record levels partly driven by record foreign institutional investment and FDI.”

However the business confidence index is showing rise in sentiments on the back of a stable political regime with the new government it said.

Weakening of prices due to cheaper food and fuel inflation is also positive but agricultural growth is predicted to be lower than last year as there was deficit rainfall with uneven spatial and temporal patterns.

“The pace of growth shows signs of slowing down in the services sector. Not surprisingly bank credit to the commercial sector has not picked pace and continues to languish.Further the slowdown in the external economy except the United States shows little growth prospects for the external sector even though exports grew in the first quarter” it said.

Therefore while inflation has weakened significantly and sentiments have improved the fundamentals of the economy continue to be weak said NCAER.