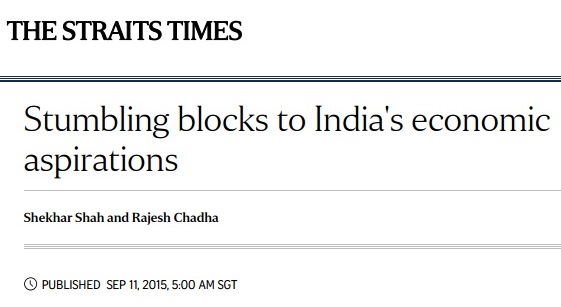 India the world’s third-largest economy measured in purchasing power parity terms became a middle-income country in 2007. It has one of the world’s youngest populations with some 260 million people below the age of 25 and its economy is once again growing fast at 7 per cent one of the world’s fastest-growing economies as of last month. But will it grow rich before it grows old?

Its economic growth in the years before the global financial crisis was also spectacular and substantially reduced poverty. But India is likely to remain a lower-middle-income country for the next 15 years at least. It has one of the world’s largest concentrations of poor people with more than 723 million people in 2011 living on less than US$2 (S$2.83) a day.
Part of the problem facing policymakers is India’s astonishing diversity. Some of the states in the Union are solidly middle income like Haryana and Tamil Nadu. Others like Bihar and Uttar Pradesh would be among the world’s poorest countries were they independent.
This means that as India confronts problems that are typically thought of as characterising low-income countries it may also be forced to consider the kinds of policy challenges that bedevil middle-income countries.
It will need to start thinking about how it will compete in a rapidly changing landscape of manufacturing global commerce and skillsets shaped by global supply chains distributed sourcing and processing and disruptive technologies not yet invented.
Its low female labour-force participation rate – around 33 per cent in 2012 compared with an East Asian average of 63 per cent – must be addressed. Its innovation and education supply chains require large strategic investments.
But as important as these long-term challenges are to India escaping the middle-income trap the necessity of escaping its low-income trap is if anything even more pressing.
Manufacturing has traditionally been the sector that contributes most strongly to economic growth in developing countries like India. But there are some disturbing headwinds that will make progress in this area very difficult without concerted policy action.
Even though India ought to have a comparative advantage in low-skilled labour-intensive manufacturing currently the formal registered manufacturing sector in India uses skilled labour more intensively.
Either the sector will have to change in order to absorb a vast informal labour force or manufacturing will struggle to provide the productive employment opportunities India sorely needs. And growth in registered manufacturing as a share of output seems to have stalled well before much of India has fully industrialised.
Some recent estimates put out by the government in its 2014-15 Annual Economic Survey show that only in Gujarat and in Himachal Pradesh is registered manufacturing’s share of value added increasing.
Why has growth in this sector remained so sluggish in a country that is so labour-abundant? The failure to liberalise factor markets – and in particular labour and land markets – is often blamed.
There are over 140 overlapping labour laws in India: 44 at the federal level and about 100 at the state level. States with overly restrictive laws have experienced weaker industrial growth and have benefited less from investment delicensing. The political economy of reform in both areas is difficult given the regulatory overlap with different levels of government.
More broadly the task facing Indian reformers will be made more difficult by three factors that were not faced by other rapid industrialisers in the region.
One is the political economy of a large but underdeveloped country. India’s democracy is a vibrant one but the sheer size of the poor population means that there is a constant temptation for policymakers to focus their attention on spending tax revenues on handouts rather than on stoking economic growth in order to create jobs that lift people out of poverty.
Another is the disorderly fragmented global trading environment with the kind of open multilateralism that facilitated growth in East Asia rapidly giving way to a thicket of preferential deals and trading blocs.
And India must also industrialise at the same time as the world is trying to wean itself off greenhouse gas-emitting energy sources and technologies. This is a constraint that did not face countries such as Japan and South Korea during their development.
In all India’s policymakers face a formidable set of challenges that spans the gamut of economic development.
The new Modi government has shown that it understands better than any government before it the scale and breadth of the task at hand. But like its predecessors it runs the risk of getting submerged in the many pressing day-to-day issues that confront it. And allowing its rhetoric to run ahead of its results.
What is needed is a small tightly organised but empowered group of policymakers policy researchers and even younger politicians who are charged with thinking about India’s future and the policy strategies required to secure prosperity and productivity.
Such a group should not seek to put out the daily fires that beset every government but apply its strategic reasoning to all policies and programmes under review and to new ones that no one is yet thinking about.
This article summarises a paper prepared for the 37th Pacific Trade and Development Conference and was first published in the East Asia Forum website.
Published in: http://www.straitstimes.com/opinion/stumbling-blocks-to-indias-economic-aspirations, September 11, 2015
Download