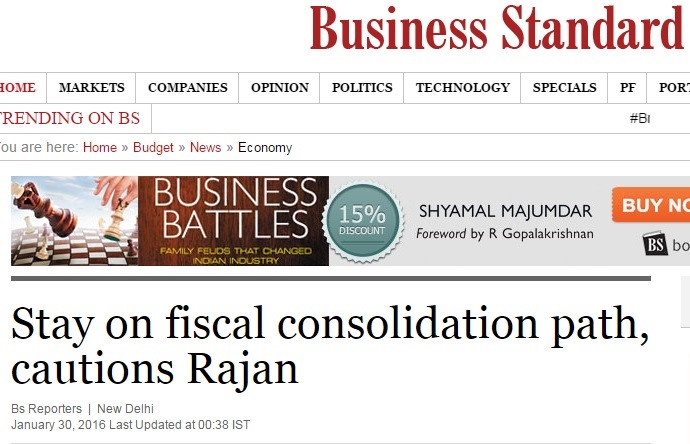 Reserve Bank of India Governor Raghuram Rajan on Friday backed fiscal consolidation over “aggressive” policies to boost economic growth as the finance ministry grapples with a dilemma between economic stability and growth ahead of the Budget.

Delivering the C D Deshmukh memorial lecture at the National Council of Applied Economic Research in New Delhi he also favoured greater competition among banks saying the government should decentralise decision making in public sector banks (PSBs) after professionalising their boards. Asserting that some stressed loans have to be written down to improve the health of PSBs Rajan said it will pave the way for mergers and help optimise their resources. “The consolidated fiscal deficit of the states and Centre in India is by far the largest among countries we like to compare ourselves with; presently only Brazil a country in difficulty rivals us on this measure” Rajan said.

He cited International Monetary Fund (IMF) estimates saying that the consolidated fiscal deficit of the Centre and states went up from 7 per cent in 2014 to 7.2 per cent in 2015. “So we actually expanded the aggregate deficit in the last calendar year. With UDAY the scheme to revive state power distribution companies coming into operation in the next fiscal it is unlikely that states will be shrinking their deficits which puts pressure on the Centre to adjust more” he said while adding that it is the IMF figures which investors watch.

The governor questioned arguments by those favouring fiscal expansion on the grounds that it is necessary to generate the growth needed to put our debt to GDP ratio back on a sustainable path. “This is a novel argument. Ordinarily one would think that a government should borrow less that is run lower fiscal deficits in order to reduce its debt. But there is indeed a theoretical possibility that the growth generated by the fiscal expansion is so great as to outweigh the additional debt that is taken on. Unfortunately the growth multipliers on government spending at this juncture are likely to be much smaller so more spending will probably hurt debt dynamics” he said.

“Put differently it is worth asking if there really are very high return investments that we are foregoing by staying on the consolidation path?” he wondered.

Rajan cited the example of Brazil as a similar developing economy which tried to grow too fast through artificial monetary policy stimulus and paid the price. He said the fellow member of the Brics is now grappling with high inflation and fiscal deficit with growth having shrunk by 3.8 per cent last year. “As Brazil’s experience suggests the enormous costs of becoming an unstable country far outweigh any small growth benefits that can be obtained through aggressive policies. We should be very careful about jeopardising our single most important strength during this period of global turmoil macroeconomic stability” Rajan told the audience.

“It is to the immense credit of the (Indian) government that we have over seven per cent growth low inflation and a low current account deficit. But it is at such times that we should not be over-ambitious” Rajan said