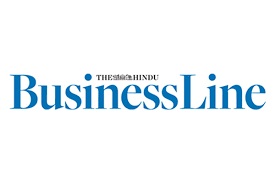 The East’s low may worsen the regional imbalance as the second Covid wave rages on.

The NCAER Business Confidence Index (BCI) a measure of business sentiments fell for two consecutive quarters in 2019-20:Q4 and 2020-21:Q1 on a quarter-on-quarter basis. After the lockdown restrictions were withdrawn business sentiments recovered in a V-shaped form in 2020-21:Q2 and then at a moderating pace in Q3. However the index has remained virtually unchanged between Q3 and Q4. 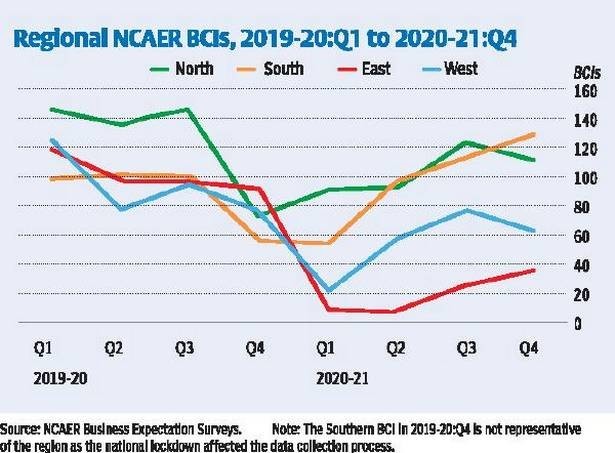 The BCI of the West has been lower than the North and South (Figure 1) but higher than the East. After falling for two consecutive quarters in 2019-20:Q4 and 2020-21:Q1 BCI recovered in Q2 and Q3 of 2020-21 but fell again in Q4 of 2020-21. This coincided with the survey period when the second wave of the Coronavirus cases had hit both Pune and Mumbai as mentioned earlier.

Although business sentiments have recovered in Q3 and Q4 the eastern BCI remained the lowest amongst all the regions.

We specifically discuss the East. Only 1.7 per cent of firms in the East responded that “overall economic conditions will be better in next six months” and “present investment climate is positive”. These two form the macro components of the BCI which means that Eastern firms’ macro perceptions of the economy is very weak. The gap between the East and South on these components is quite marked. Last but not the least only 6.1 per cent of firms in the East perceived that “financial position of firms will improve in next six months”.

Business sentiments are weak across regions for the “present investment climate” is positive. While the share of positive responses of firms are 60 per cent in the South it was lower than almost 30 percentage points in other regions. Sentiments about capacity utilisation in the North is the highest at 94.4 per cent. It is but obvious that this is going to suffer in the first quarter as lockdown was imposed in Delhi in April-May 2021.

Bhandari is a Senior Fellow Gupta and Urs are Associate Fellows and Sahu is a Senior Research Analyst at NCAER. Views expressed are personal.