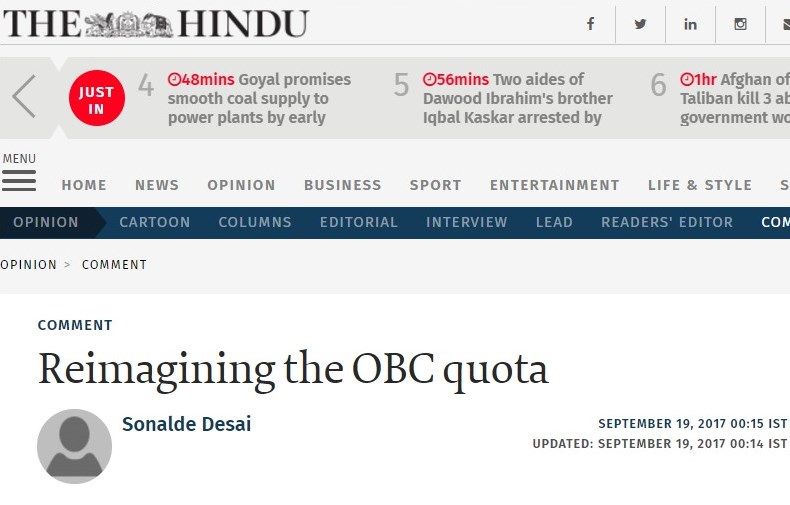 Regardless of the political impulse that led the government to announce creation of a committee to look into sub-categorisation of Other Backward Classes (OBC) it provides an opening to ensure social justice in an efficient manner. The biggest challenge India faces is that the groups perceived to be disadvantaged consist of a very large segment of Indian society while public policies are highly limited in scope.

Some illustrative statistics are eye-opening. The National Sample Survey (NSS) data from 2011-12 show that about 19% of the sample claims to be Dalit 9% Adivasi and 44% OBC. While some of these claims may be aspirational rather than real this totals a whopping 72%. Among the population aged 25-49 less than 7% have a college degree. By most estimates less than 3% of the whole population is employed in government and public-sector jobs. Since reservations cover only half the college seats and public-sector jobs the mismatch is obvious. A vast proportion of the population eligible for reservations must still compete for a tiny number of reserved and non-reserved category jobs. It is not surprising that there is tremendous internal competition within groups.

If we want reservations to make a significant difference in the lives of the marginalised groups there are only two options. Either the government must drastically increase availability of government jobs and college seats or it must reduce the size of the population eligible for these benefits. While the Supreme Court would not allow reservations to exceed 50% frankly it does not matter. Whether available public sector jobs cover 1.5% of the population or 3% these will only offer opportunities to a minuscule fraction of individuals in reserved categories. Hence the only viable option is to reduce the size of the eligible population possibly along the lines of sub-categorisation proposed by the government.

However while the media and claimants to the coveted OBC status such as Jats Kapus and Patels are busy arguing over the merits of this proposal very little attention is paid to the practical challenges facing sub-categorisation. How will we know which castes are the most disadvantaged? At the moment the only reputable nationwide data on caste comes from the 1931 colonial Census and some of the ad hoc surveys conducted for specific castes.

The Socio-Economic Caste Census (SECC) of 2011 was supposed to provide up-to-date comprehensive data. However the results remain shrouded in mystery. When releasing poverty and deprivation data from the SECC in 2015 it was found that about 4.6 million distinct caste names including names of gotra surname and phonetic variations were returned making the results almost impossible to interpret. For nearly 80 million individuals caste data were believed to be erroneous. Since then we have heard little about the quality of caste data in SECC and even less about its results. In 2015 the then NITI Aayog Vice Chairperson Arvind Panagariya was asked to head a committee to chair the caste classification using SECC data. Little seems to have come of it.