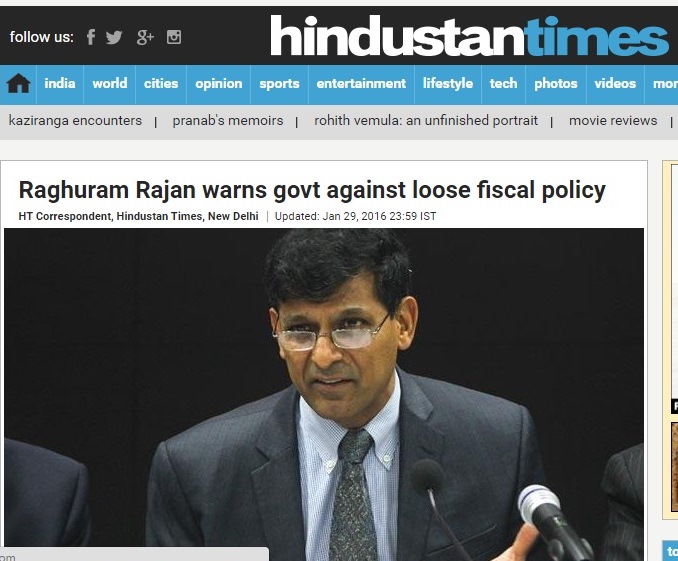 Reserve Bank of India governor Raghuram Rajan on Friday said that a growth rate of over 7% was a credible achievement given wobbly conditions in the world economy but cautioned the government against being “over ambitious” and asked it to contain its borrowings.

“It is to the immense credit of the government that we have over 7% growth low inflation and a low current account deficit” Rajan said. “But it is at such times that we should not be overambitious.” Rajan made these comments during the course of the NCAER’s annual CD Deshmukh memorial lecture on Friday.

Rajan asked the government to get its fiscal math right cautioning that a strategy of borrowing more to boost spending and investment could prove counter-productive and upset the budding recovery signs.

The RBI governor underlined the need for maintaining policy consistency to reinforce India’s credibility as a stable global growth engine.
“Macroeconomic stability relies immensely on policy credibility which is the public belief that policy will depart from the charted course only under extreme necessity and not because of convenience” he said.

He said some recent policies such as UDAY could weaken the government’s balance sheet.

“With UDAY the scheme to revive state power distribution companies coming into operation in the next fiscal it is unlikely that states will be shrinking their deficits which puts pressure on the centre to adjust more” he said.

The government has approved plans for the financially embattled states’ electricity boards in a Centre-assisted bond buying scheme under an umbrella programme called UDAY.

Rajan underlined the need to have healthy banks and said as the health of banks recovers the issue of mergers can be addressed and a few lenders will have to merge to optimise their use of resources. “While the profitability of some banks may be impaired in the short run the system once cleaned will be able to support economic growth in a sustainable and profitable way” he said.

While the government is likely to meet the fiscal deficit target of 3.9% for the current financial year it could face challenges in 2016-17 with the implementation of the One Rank One Pension and 7th Pay Commission recommendations. The fiscal deficit target for 2016-17 is 3.5%. According to IMF estimates — the benchmark for the global investor — India’s consolidated fiscal deficit went up from 7% in 2014 to 7.2% in 2015.

Rajan said the central bank would not change its strategy of targeting inflation. “Let me reiterate that we have absolutely no intent of departing from the inflation framework that has been agreed with the government.”