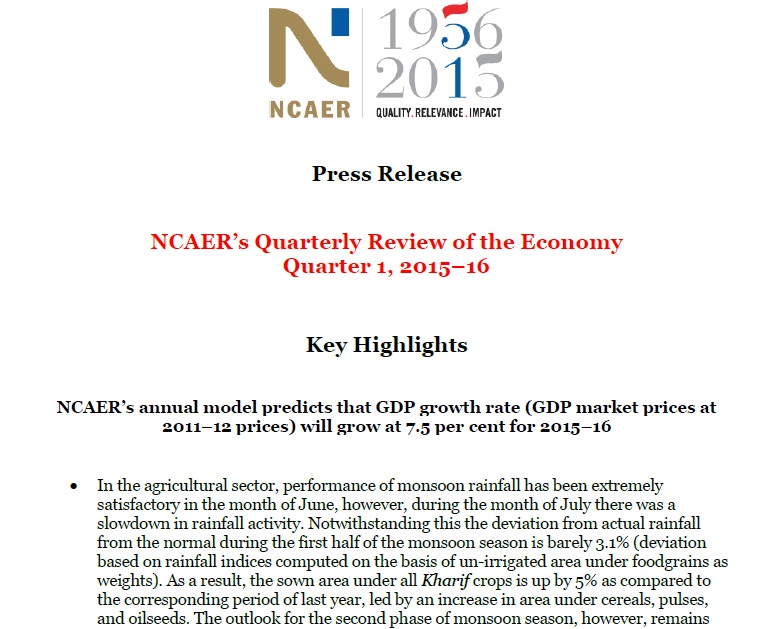 In sum satisfactory rainfall in the first half of the south-west monsoon season if sustained may help revive rural demand.  Lower inflation due to lower commodity prices and lower food inflation may spur demand. The indicators from the first quarter suggest that agriculture industry and services are continuing to grow at same or almost similar rates as was the case in the fourth quarter of the previous fiscal.  The turbulences in the world economy though add elements uncertainty to the growth path of the Indian economy.  Overall India is predicted to achieve a marginally higher rate of growth of 7.5% than last year (7.3%).

NCAER the National Council of Applied Economic Research is India’s oldest and largest independent economic think-tank set up in 1956 at the behest of Prime Minister Jawaharlal Nehru to inform policy choices for both the public and private sectors.  Over nearly six decades NCAER has served the nation well with its rich offering of applied policy research unique data sets evaluations and policy inputs to central and state governments corporate India the media and informed citizens. It is one of a few independent think-tanks world-wide that combines rigorous economic analysis and policy outreach with data collection capabilities particularly for large-scale household surveys. NCAER is currently led by its Director-General Dr Shekhar Shah and governed by an independent Governing Body chaired by Mr Nandan M. Nilekani.