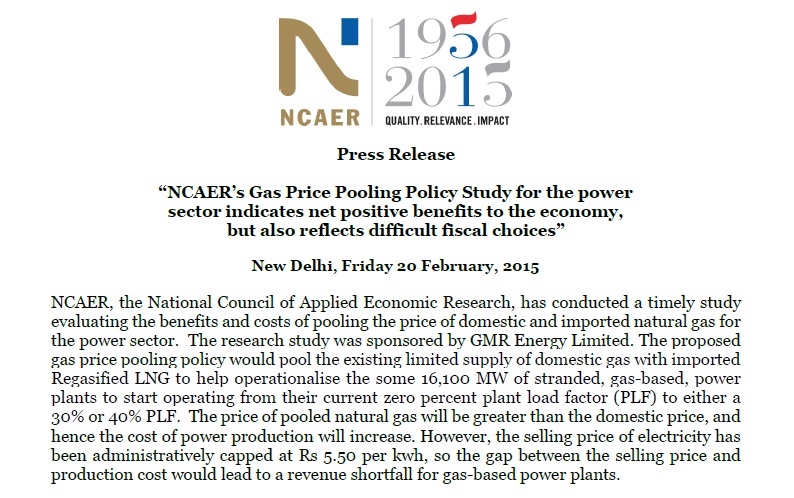 NCAER the National Council of Applied Economic Research has conducted a timely study evaluating the benefits and costs of pooling the price of domestic and imported natural gas for the power sector.  The research study was sponsored by GMR Energy Limited. The proposed gas price pooling policy would pool the existing limited supply of domestic gas with imported Regasified LNG to help operationalise the some 16100 MW of stranded gas-based power plants to start operating from their current zero percent plant load factor (PLF) to either a 30% or 40% PLF.  The price of pooled natural gas will be greater than the domestic price and hence the cost of power production will increase. However the selling price of electricity has been administratively capped at Rs 5.50 per kwh so the gap between the selling price and production cost would lead to a revenue shortfall for gas-based power plants.

This revenue shortfall is proposed to be partially borne by the government as subsidies and tax concessions and partially borne by the interlinked sectors taking cuts in their revenues. Hence the gas price pooling policy also includes a waiver of the 12.5%VAT/ CST and other levies on natural gas by the states customs duty exemption for R-LNG a 50% cut in pipeline tariff 50% cut in R-LNG regasification charges and a 75% cut in marketing margins by the Gas Authority of India (GAIL) which is the designated gas pool operator.

The proposed Gas Price Pooling Policy is complex and leads to a chain of events: potential gains to interlinked sectors as well as potential losses to interlinked sectors. The NCAER Study gives a composite picture of the total gains and total losses to all sectors due to these inter-linkages as well as of the fiscal costs to the government of this policy.

In addition the NCAER Gas Price Pooling Study captures the macroeconomic impact of the increased power generation and its multiplier effects as a result of greater availability of gas and computes the net impact of the proposed policy. These simulations have been done under different scenarios including plants operating at 30% PLF 40% PLF and 50% PLF and with and without the additional availability of domestic gas.

Without first considering the impact on economic growth the NCAER Study finds that if plants were to operate at 30% PLF in a scenario in which some domestic gas is available and the rest is imported the total revenue shortfall for the gas-based power plants in 2015-16 would be Rs 10165 crores. This shortfall is projected to be divided as follows: Rs 4531 crore in subsidies borne by the central government Rs 3162 crore tax revenue loss due to tax concessions (VAT/CST/ Customs) and Rs 2472 crore revenue losses to be borne by other sectors taking cuts in regasification charges pipeline tariffs and marketing margins. However if no domestic gas is available and 100 percent of the gas is imported the revenue shortfall would be some 50 percent higher at Rs 15270 crores.

With higher capacity utilizations and in a scenario where domestic gas is available the revenue shortfalls are higher at Rs 15255 crores and Rs 22423 crores at 40% and 50% PLF in 2015-16.  These revenue shortfalls would also be apportioned as subsidies tax concessions and revenue cuts as per policy guidelines.

Turning to the overall growth impact of the policy the increased power generated as a result of the policy will have positive growth multiplier effects due to its forward and backward linkages. NCAER’s input-output and computable general equilibrium models were used to compute these multiplier effects to assess the change in the economy’s GDP employment and fiscal parameters.  Much would depend on the PLF achieved by the new capacity.

The NCAER Study finally calculates the net impact of the proposed Gas Price Pooling policy by taking into account its benefits from higher GDP and its costs which include fiscal costs and costs to other sectors. For instance in 2015-16 in the scenario that some domestic gas is available the net benefits are projected at 0.43% of GDP or Rs 59266 crores with 30% PLF  0.59 % of GDP or Rs 80852 crore with 40% PLF and 0.74% of GDP or Rs 102438 crores with 50% PLF.

Dr Indira Iyer Senior Fellow and team leader of this study at NCAER noted that:

“Globally there is a strong correlation between economic growth and energy consumption and India is no exception. This NCAER Study builds on larger and more detailed studies at NCAER examining the energy sector in India and the policies that impact energy production. We have examined the potential benefits and fiscal costs of the gas price pooling policy under various scenarios. Simulations suggest that this policy will yield positive net benefits as long as policymakers build suitable safeguards into this policy to not pick up and pay for the inefficiencies of the public and private sectors over a long time period or to bail out companies for a period more than strictly necessary. How the policy envisages ending the subsidy on gas for power production is as important as how it responds to the logic of starting the subsidy.”