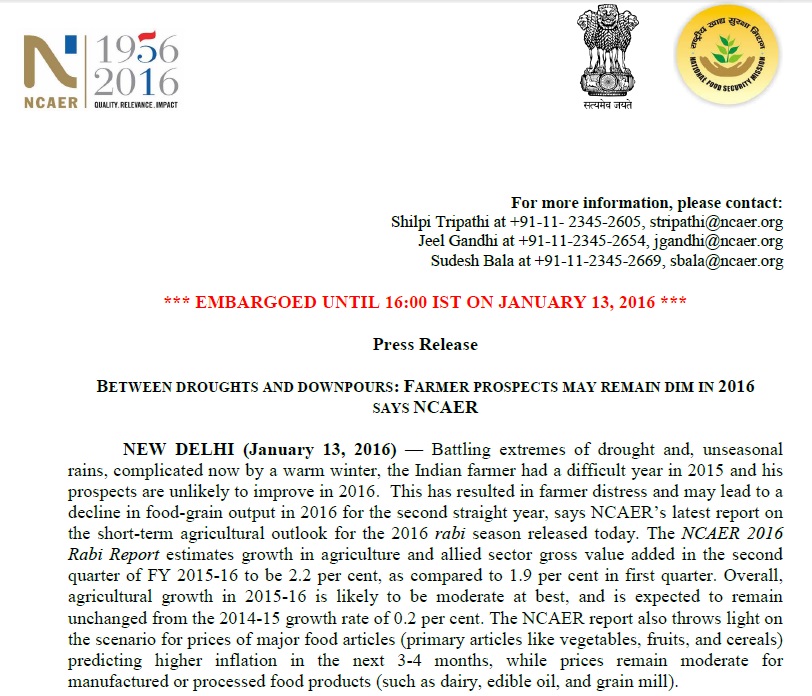 NEW DELHI (January 13 2016) – Battling extremes of drought and unseasonal rains complicated now by a warm winter the Indian farmer had a difficult year in 2015 and his prospects are unlikely to improve in 2016. This has resulted in farmer distress and may lead to a decline in food-grain output in 2016 for the second straight year says NCAER’s latest report on the short-term agricultural outlook for the 2016 rabi season released today. The NCAER 2016 Rabi Report estimates growth in agriculture and allied sector gross value added in the second quarter of FY 2015-16 to be 2.2 per cent as compared to 1.9 per cent in first quarter. Overall agricultural growth in 2015-16 is likely to be moderate at best and is expected to remain unchanged from the 2014-15 growth rate of 0.2 per cent. The NCAER report also throws light on the scenario for prices of major food articles (primary articles like vegetables fruits and cereals) predicting higher inflation in the next 3-4 months while prices remain moderate for manufactured or processed food products (such as dairy edible oil and grain mill).

These and other findings were discussed today at a national workshop on the Indian Agricultural Outlook: the 2016 Rabi Season and Medium-term Prospects. The findings come from ongoing research at NCAER the National Council of Applied Economic Research in New Delhi that is supported by the National Food Security Mission of the Ministry of Agriculture & Farmers Welfare. It is also been supported by the UN’s Food and Agricultural Organisation.

Smt. Sangeeta Verma Economic and Statistical Adviser in the Directorate of Economics and Statistics in the Ministry of Agriculture in releasing the NCAER Rabi Report today noted that “The Government is taking the challenges facing the agricultural sector particularly farmers very seriously. It has initiated a string of measures to tackle these challenges. These measures include the launching of an e-marketing portal for farmers promotion of irrigation schemes at various levels that replicate successful schemes at the state level and the launch of a comprehensive national crop insurance program.” She noted the Government’s concern about the high and rising prices of pulses and emphasized that “this necessitates extensive agricultural research done in an academically robust and professional manner.” She mentioned that these issues are under intense discussion in the Government.

The workshop offered an important opportunity for the Indian policy and economic research community to discuss agricultural policies in ways that allow them to trace the economy-wide implications of such policies using specialized tools developed at NCAER. The daylong discussion by economists and agricultural experts on a variety of policies and their impacts provided insights for government policymakers to improve their understanding of India’s short and medium-term agricultural prospects in the next 3 to 5 years.

While launching the National Workshop Dr Shekhar Shah Director-General NCAER noted “Between droughts and downpours it is the Indian farmer who pays the price. The poor crop and price outcomes expected this rabi season is a graphic reminder of the vulnerability that Indian agriculture still faces. Between the vagaries of the weather and the inability of policymakers to design and implement sensible policies in agriculture whether to do with irrigation subsidies marketing or supply chains the India farmer ultimately gets squeezed. And this then leads to more sops rather than structural reforms. Breaking out of this vicious cycle does not require rocket science. We have the answers. But it does require policymakers to take a realistic view of both technical solutions and the politics of agricultural reforms and map a strategy for sequencing successful reforms whether it is in cereals or sugar-cane or oil-seeds or pulses based on solid evidence of what works and what the rural voter will accept. This has to be one of the highest reform priorities for the government.”

The findings of the NCAER report are based on a comprehensive assessment of farm input prices and availability monsoon rainfall market demand conditions and government policies impacting this year’s rabi and kharif crop production. Wheat production in marketing year 2016-17 is expected to be lower at 85 million tons as compared to the already poor 2015 production of 88.9 million tons due to poor weather and wheat exports are likely to remain negligible. The 2015-16 rabi rice production is expected to be somewhat lower than the 2014-15 production due to poor post-monsoon rains and lower water levels in reservoirs. Rabi rice exports are forecast to decline to 9.0 million tonnes from 11.8 million tons in marketing year 2014-15.

While introducing NCAER’s short and medium-term agricultural scenarios the principal author and team leader of the NCAER study Dr Rajesh Chadha NCAER’s Senior Research Counselor remarked that “The present Rabi report provides a comprehensive assessment of the challenges arising due to aberrant rainfall patterns despite extensive investment in irrigation technology and sharing of best practices. The report covers indicators of supply and demand for major food commodities both in the domestic economy and the global markets. External factors continue to remain less conducive to agricultural exports this year due to a better global production outlook and large carryover stocks for most traded commodities such as wheat rice maize and soybean/soybean meal except in the case of sugar.”

The study highlighted the severe supply-side bottlenecks that persist in Indian agriculture including poor logistics outdated marketing arrangements inadequate cold storage facilities and lack of processing facilities. These continue to hurt supply and the availability of food items such as pulses and perishable food products. Dealing with these domestic structural distortions affecting the production storage transport and marketing of agricultural production should be at the top of the agenda for Indian policymakers if they wish to take Indian agriculture into the 21st century.

On the external front the NCAER report finds that global food markets are likely to have remain well stocked and therefore were less volatile in 2015-16. As a result international prices of most commodities have remained well below their prices a year ago although projections show that most commodity prices are likely to firm up modestly in 2016-17. The report noted that external factors continue to remain less conducive to Indian agricultural exports this year as was the case last year. This was due to a better global production outlook and large carryover stocks for most commodities traded by India. Indian exports could face tough competition in the global market as domestic prices are likely to rule above world prices. There could be an increase in the import of pulses which along with the recent weakening of the Indian rupee against the U.S. dollar could lead to higher prices for Indian consumers.