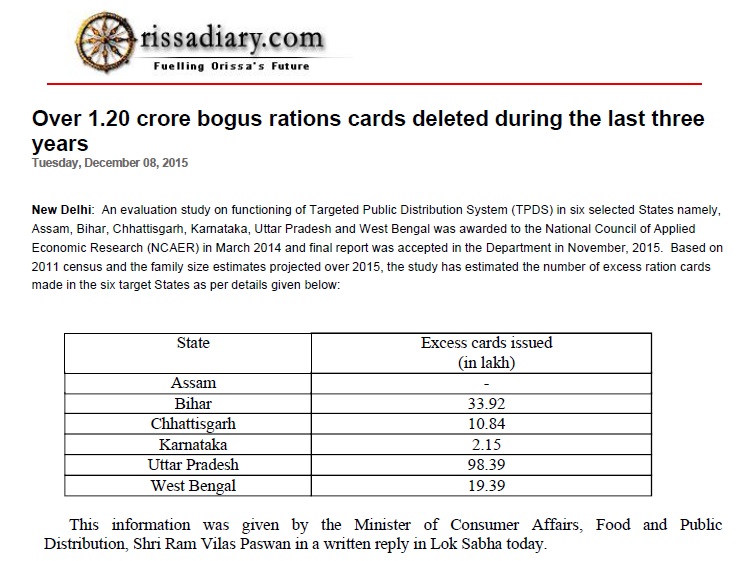 New Delhi:  An evaluation study on functioning of Targeted Public Distribution System (TPDS) in six selected States namely Assam Bihar Chhattisgarh Karnataka Uttar Pradesh and West Bengal was awarded to the National Council of Applied Economic Research (NCAER) in March 2014 and final report was accepted in the Department in November 2015.  Based on 2011 census and the family size estimates projected over 2015 the study has estimated the number of excess ration cards made in the six target States as per details given below:

This information was given by the Minister of Consumer Affairs Food and Public Distribution Shri Ram Vilas Paswan in a written reply in Lok Sabha today.

The Minister said that detection and deletion of fake cards does not mean reduction in allocation and savings in subsidy but results in selection of deserving beneficiaries and issuance of ration cards to them leading to better targeting of subsidy.

He said that with an aim to strengthen the TPDS and to curb diversion/leakage a Nine Point Action Plan was evolved in July 2006 and forwarded to State/UT Governments for implementation by them.  The various points of action included undertaking of campaign by State Governments for review of Below Poverty Line (BPL) / Antyodaya Anna Yojana (AAY) lists to eliminate ghost ration cards.

The Minister said that as a result of implementation of Nine Point Action Plan since July 2006 30 State/UT Governments have reported up to 30.06.2015 deletion of 494.50 lakhs bogus / ineligible ration cards.

He said that in a continuous endeavour to strengthen and streamline TPDS the Government has initiated implementation of a plan scheme on ‘End-to-end Computerisation of TPDS Operations’ during the 12th Five Year Plan (2012-17) to ensure transparency and check leakages in the TPDS system.  Under the scheme financial assistance is being provided to States/UTs on cost sharing basis. The cost is being shared on 90:10 basis with North East States and on 50:50 basis with other States/UTs.  Under this scheme as per reports received as on 31.10.2015 ration card data digitization has been done in 29 States/UTs ration card data is available on Web Portal in 27 States/UTs Online allocation is being done in 16 States/UTs supply-chain management in 8 States/UTs Transparency Portal set up in 27 States/UTs online Grievance Redressal Mechanism in 26 and toll free helpline number has been set up in 32 States/UTs.

He added that as part of beneficiary data digitization States/UTs have been requested to seed the Aadhaar numbers wherever available so as to weed out the ineligible/bogus/duplicate beneficiaries. As part of Fair Price Shop (FPS) automation at FPS use of Aadhaar will ensure proper identification of beneficiaries and distribution of foodgrains only to the intended beneficiaries thereby reducing leakage / diversion etc.

To curb leakages further under the National Food Security Act 2013 (NFSA) inter alia States/UTs have been asked to either do cash transfer of food subsidy under Direct Benefit Transfer (DBT) or install electronic Point of Sale Device (ePoS) at the FPSs. 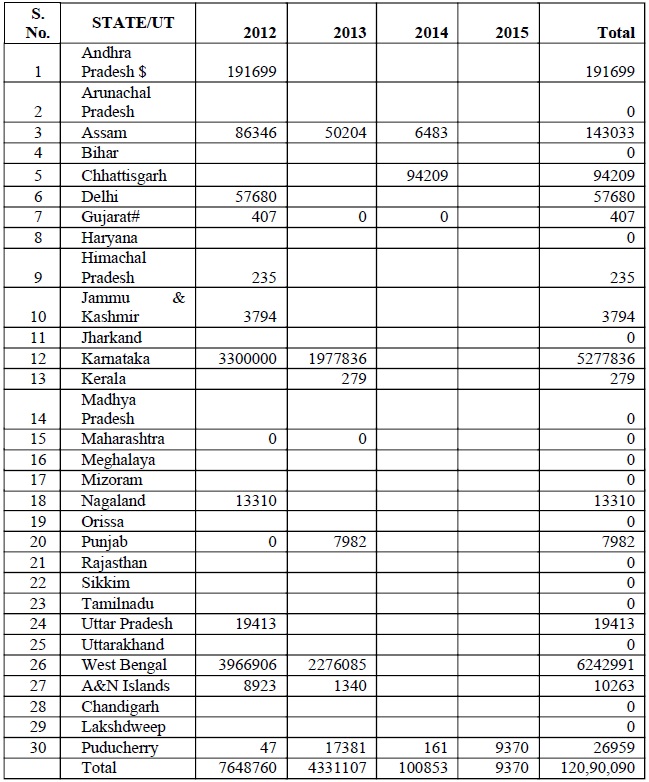