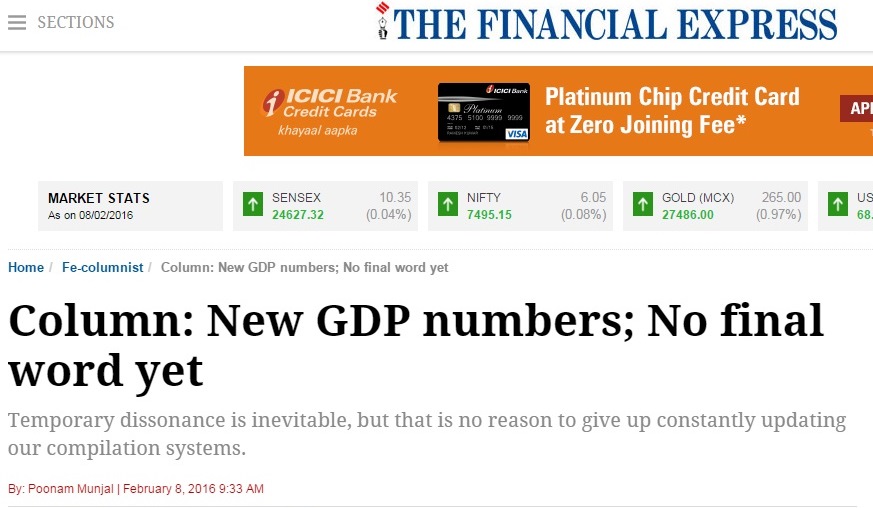 Temporary dissonance is inevitable but that is no reason to give up constantly updating our compilation systems.

The release of industry-wise Gross Value Added (GVA) at basic prices rather than industry-wise GDP at factor cost is part of the effort to streamline our numbers with international standards. (Reuters)

Third quarter GDP numbers will be out today. But the debate over the new numbers based on a revised more recent base-year and new methodology is unlikely to come to an end. Indeed ever since the new series was made public in January last year the ministry of statistics and programme implementation (MoSPI) and the Central Statistical Organisation (CSO) have been at the receiving end of more brickbats than bouquets. This is despite the fact that whatever the hair-splitting over the exact numbers the new series is the consequence of numerous long-overdue conceptual changes.

Ideally GDP accounts must conform to the System of National Accounts (SNA) the internationally-agreed standard set of recommendations on how to compile measures of economic activity developed by the United Nations Statistical Division. And on this there is no doubt. The new numbers are the outcome of the CSO’s efforts to align our accounts with SNA not only to be in line with global best practice but also to facilitate international comparisons.

The release of industry-wise Gross Value Added (GVA) at basic prices rather than industry-wise GDP at factor cost is part of the effort to streamline our numbers with international standards. While this may sound like an entirely new concept for India the fact is this is not the first time CSO has compiled GVA at basic prices. CSO has been coming out with a detailed publication called “Sequence of National Accounts” every year since 2009. This publication reports the GVA/GDP numbers at basic prices in conformity with the SNA. The latest release just happens to be the first time that such numbers are being reported in their press releases as well.

The change was long over-due. Industry-wise GDP at factor cost as it was known was not only internationally incompatible but was also a misnomer. The international practice is to report industry-wise GVA at basic prices not at factor cost. Moreover at industry level what we arrive at is GVA not GDP. GDP is actually the aggregation of GVA of all industries with net indirect taxes added. Production taxes less subsidies when added to factor cost translate to basic prices.

Other reasons for the change include base year revision in this instance from FY05 to FY12. Base year revision happens every few years when apart from changing the reference year to ensure the numbers reflect the changing structure of the economy there are methodological improvements based on the latest available data. The new series incorporates conceptual changes and latest classification systems as recommended by the SNA. The use of latest data is evident in the case of the trade sector for instance where NSSO’s latest survey data for FY11 (instead of NSSO’s FY00 data which was used in previous base revision) has been used to arrive at the base year numbers. The underlying indicator to carry forward trade estimates for the following years has also undergone a change from one based on volume to that based on value.

Another major change relates to the coverage of data. Instead of using the hitherto-followed establishment approach in mining and manufacturing sectors the new estimates use the enterprise approach. This includes the post-manufacturing value-added through marketing and other services of say head offices and ancillary activities. This part of value-added was earlier being captured indirectly in the household sector as the residual component of total value added after deducting the part obtained from the registered value-added sourced from ASI (Annual Survey of Industries). Since ASI follows the establishment approach this method resulted in an underestimation of registered and hence the overall manufacturing value-added. To overcome this the new manufacturing as well as services GVA also includes the corporate financial statistics data of ministry of corporate affairs (MCA) to complete the picture.

Apart from these specific methodological changes have been made in arriving at the GVA estimates at industry or sector level. Among those worth mentioning is the change in the mining sector in which value-addition from extraction of sand has now been estimated through an indirect method taking it as an input of construction sector. Likewise in the construction sector long-outdated rates and ratios to estimate its GVA through commodity flow approach have been updated with new ones obtained through a recently conducted study. In the financial services sector information from the accounts of stock brokers stock exchanges asset management companies mutual funds and pension funds has also been included.

Every base year revision goes hand-in-hand with a refined methodology and this one is no exception. However as the latest revision has shown doubts as well as confusion and some temporary dissonance is inevitable. But that is no reason to give up the endeavour to constantly update our compilation systems to bring them on par with best global practices. Indeed we would argue there is still room for further refinement.

Statistics of minor forest products for instance are possibly an underestimate as these are based on only royalty values. Hence there is a need for actual data comprising both production and price data of all forestry products for proper evaluation. Communication sector data from private companies is not complete and hence is based on proxy indicators. Data deficiency with regard to savings of private corporates and the household sector particularly household saving in physical assets which is estimated using the residual approach is another area of deficiency. Ideally independent household surveys should be conducted to collect such data. Likewise compilation of PFCE (Private Final Consumption Expenditure) through the commodity flow approach—again using age-old rates and ratios for most of the consumption items might be overstating or understating the actual PFCE. At present nobody is sure.

Over the years India in common with a number of other countries has been working towards making its national accounts more robust comprehensive and all-inclusive. However this is a never-ending process. There will be scepticism there will be denunciation; but the effort is not in vain and must not cease.

The author is associate fellow NCAER