NCAER's Business Confidence Index rises in the second quarter of 2015-16 by 6.3% 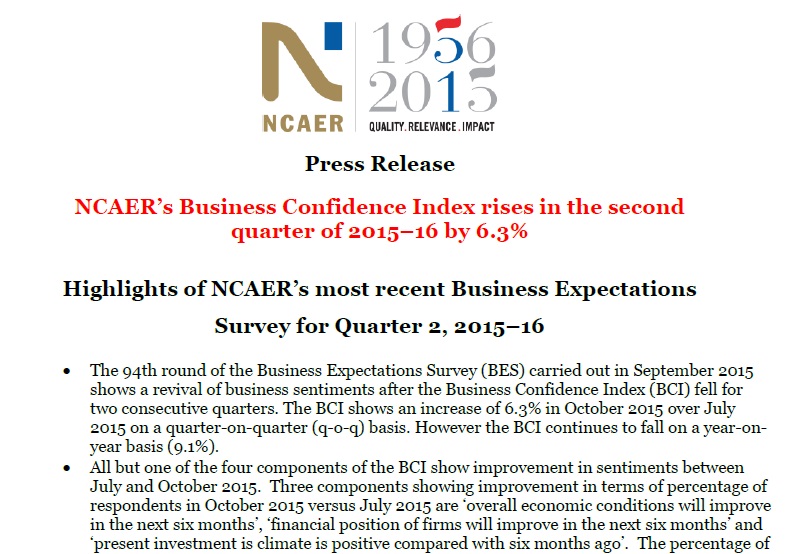 Dr Bornali Bhandari Fellow NCAER noted “the economy shows signs of bottoming out but the recovery remain weak and fraught with uncertainty. There is improvement in business sentiments and stabilising of political sentiments. The improvement in sentiments of small and medium enterprises is the best signal that this survey shows. The capital goods and services sectors also show improvement in sentiments. However the percentage of respondents saying that ‘present investment is climate is positive’ remains at 43.3% in October 2015 thereby signalling that investment sentiments still remain subdued. And the continued weak expectations on hiring labour in the next six months and weak confidence in ‘managing unemployment’ imply that improvement in business sentiments may not necessarily translate to more jobs in the near future.” 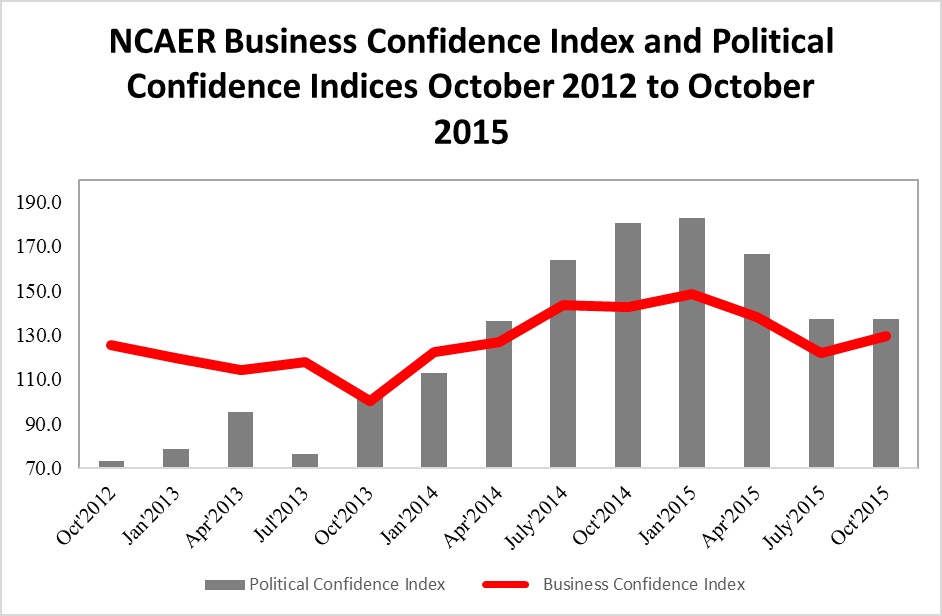 Brief Methodology: The National Council of Applied Economic Research (NCAER) has been conducting the Business Expectations Survey (BES) every quarter since 1991. It tracks the business sentiments of more than 500 Indian companies to compute a composite index the Business Confidence Index (BCI). The survey consists of responses from firms/industries across six cities to assess business sentiments in four regions of India. Delhi NCR represents the North Mumbai and Pune represent the West Kolkata represents the East and South is represented by Bangalore and Chennai. Industries are adequately represented with regard to ownership type (namely public sector private limited public limited partnership/individual ownership and MNCs) industry sector (namely consumer durables consumer non-durables intermediate goods capital goods and services sector) and firm size based on their annual turnover (in the range of less than â‚¹1 crore â‚¹1 to 10 crore â‚¹10 to 100 crore â‚¹100 to 500 crore and more than â‚¹500 crore). The sample is drawn randomly from a list of industries in each city drawn from various sources. A sizeable number of units taken in one round are retained in the next round to maintain continuity of analysis.
The Business Confidence Index (BCI) is based on four questions that carry equal weight. Two questions are devoted to macro factors and the other two to micro factors. The BCI is a simple average of all the positive responses to three questions and on the fourth question (capacity utilisation) an average of the sum of the responses to improvement versus no improvement is taken. Then the BCI is compared with the base value to obtain the change. If the BCI increases for a particular round it is due to a larger proportion of positive responses in that round. The positive responses may increase for a specific question. An increase in the level of the BCI reflects optimism in the business sector about the performance of the economy.
About NCAER

NCAER the National Council of Applied Economic Research is India’s oldest and largest independent economic think tank set up in 1956 at the behest of Prime Minister Jawaharlal Nehru to inform policy choices for both the public and private sectors. Over nearly six decades the NCAER has served the nation well with its rich offering of applied policy research unique datasets evaluations and policy inputs to central and state governments corporate India the media and informed citizens. It is one of a few independent think tanks worldwide that combines rigorous economic analysis and policy outreach with data collection capabilities particularly for large-scale household surveys. The NCAER is currently led by its Director-General Dr Shekhar Shah and governed by an independent Governing Body chaired by Mr Nandan M. Nilekani.
Media Contact