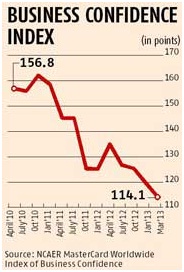 After the dismal gross domestic product (GDP) numbers released last week and the fall in the Purchasing Mangers’ Index for manufacturing announced by HSBC yesterday the economy has received another setback.

In the quarter ended March the Business Confidence Index dropped 4.5 per cent compared to the previous quarter according to a National Council of Applied Economic Research (NCAER)-MasterCard survey.

According to the 84th quarterly survey conducted in March the index stood at 114.1 points against 119.7 points in the previous quarter.

During the same period the political confidence index registered a slight improvement.

He however added “The resistance of the firm level indicator of capacity utilisation and the overall sentiment on growth in the short term are important positive signs.

Of the four the ratings on investment climate and financial position show a decline while those on capacity utilisation and expectations on economic conditions show improvement in the short term.

The survey added input costs including those on raw material labour electricity and ex-factory prices per unit of output are expected to increase in the next six months.