Most rural population now not solely in agriculture: NCAER survey 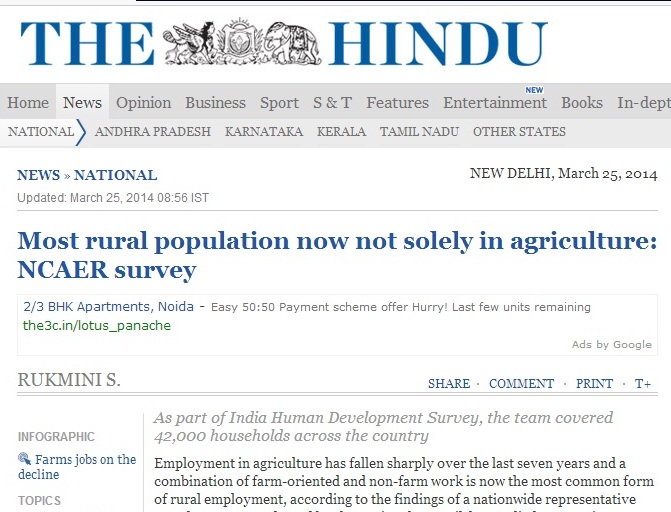 Employment in agriculture has fallen sharply over the last seven years and a combination of farm-oriented and non-farm work is now the most common form of rural employment according to the findings of a nationwide representative sample survey conducted by the National Council for Applied Economic Research (NCAER).The Hindu is reporting exclusively from the findings of the NCAER’s 2011-12 round of the India Human Development Survey.

The NCAER team covered 42000 households across the country 83 per cent of which were surveyed for the last round of the IHDS in 2004-05. The IHDS is the largest independent household sample survey in the country.

The IHDS’s findings on employment show that the fall in agricultural employment — documented in the 2011 Census as well — is much larger than what was previously believed. In 2004-05 half of all rural men and 83 per cent of rural women worked only on farms making it the most common type of rural employment. However exclusive farm-oriented work is still the most prevalent form of employment among rural women engaging 66 per cent. The IHDS findings contradict the latest data of the government’s National Sample Survey Organisation (NSSO) which shows purely farm-based work as the biggest employer in the country.

“It is a fact that the NSSO has not been able to adequately capture the combinations of different types of economic activities that people engage in” said Preet Rustagi a labour economist professor and joint director at the New Delhi–based Institute for Human Development (IHD).

According to the IHDS findings non-farm work is now a bigger employer for rural men in Punjab Haryana Assam north-eastern States Kerala and Tamil Nadu. The same is true for rural women as well in the two southern States.

While the fall in male participation is primarily explained by rising higher education enrolment the work participation rate for women have fallen even for those in their 20s and 30s.

The IHDS also confirms that wages have grown exponentially over the last decade. The daily agricultural labour wage has nearly tripled for men in the last seven years while the non-agricultural wage has more than doubled. The wages of women workers though still much less that male workers have grown similarly.

(Part 2 of a five-part series)