Lifestyle diseases are the new normal; how this is affecting the average and even deprived sections

People born before the 1970s or 1980s have witnessed a changing gamut of “normal”. Earlier owning a land-line phone in a household was a luxury. This later became “normal” for any household and now owning a smart 4G phone is the “new-normal”. While such transition is clear in the urban and sub-urban India rural areas are also experiencing leap transitions by their benchmarks. But alas this changeover to “new-normal” applies to diseases too. Many diseases associated with lifestyle such as hypertension diabetes heart-related—and earlier prevalent among the affluent section of the society—are now “new-normal” and are affecting the average and even deprived sections. For one of the research papers that we are working on we have obtained the evidence of this phenomena from the surveys conducted by the National Sample Survey Office (NSSO) on “morbidity in India” in 2004 and 2014. We have attempted to examine the distribution pattern of a range of diseases across per capita consumption expenditure of persons by plotting a pseudo-Lorenz curve for morbidity.

A standard pseudo-Lorenz curve of income plots the cumulative percentage of income from source on vertical axis and cumulative percentage of population ranked by household income or consumption expenditure on horizontal axis. Such pseudo-Lorenz curves may be attempted for other items and we have chosen morbidity for this study. Naturally the curve lies below the Line of Equal Distribution for items which belong disproportionately more to rich than to poor like income and in our case lifestyle diseases. However the curve lying above this line points towards the case when the items disproportionately belong more to poor than to rich.

Accordingly we have classified the diseases into “affluent” “normal” and “deprived” based on the values of pseudo-Lorenz ratios and Lorenz ratios for per capita consumption expenditure distribution. While affluent (or deprived) diseases hit rich people (or poor people) more than they hit poor (or rich) normal diseases are the ones which proportionately affect all economic sections of the society. We have found that in 2004 the incidence of diseases prevailing proportionately among all sections (normal) of the society in rural India was 28.2%. This proportion increased to 34.6% in 2014 clearly suggesting that many more people are now getting struck with “normal” diseases than they used to in 2004. This increase is much more in the case of urban India where incidence of diseases rose from 36% in 2004 to 49.6% in 2014.

For instance heart-related diseases or diabetes which were earlier associated with the affluent are now prevalent among other sections too. Particularly in rural areas of the total reported morbidity in 2004 1.9% of the population suffered from heart diseases and now this proportion has risen to 2.6%. The expenditure elasticity for this disease also shows that earlier it hit rich or affluent people more than it did the normal and poor people whereas now it is proportionately prevailing among all economic sections and is a “new-normal” disease. Similar phenomena is evident diseases like diabetes and hypertension. The incidence of these three diseases was 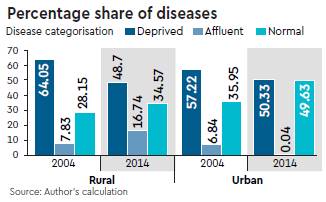 7.7% in 2004 shooting up to 17% in 2014. Similarly diseases earlier more common among the deprived section of the society are now affecting the other sections further expanding the “new-normal” horizon. The data reveals that in 2004 64% of the diseases were associated with the deprived section in rural India. This percentage has gone down to 48.6% in 2014.

For this research study we are working on unit-level data to assess the morbidity dynamics at the state-level. Our preliminary results show that states with significantly high proportion of “new-normal” diseases are Kerala (rural) and Andhra Pradesh (urban). The high level of morbidity burden affecting a broader section of society calls for a nationwide expansion in health services. As a consequence this also warrants for a possible enhanced budget allocation towards health services. This could also propel insurance companies to tap a wider customer base.