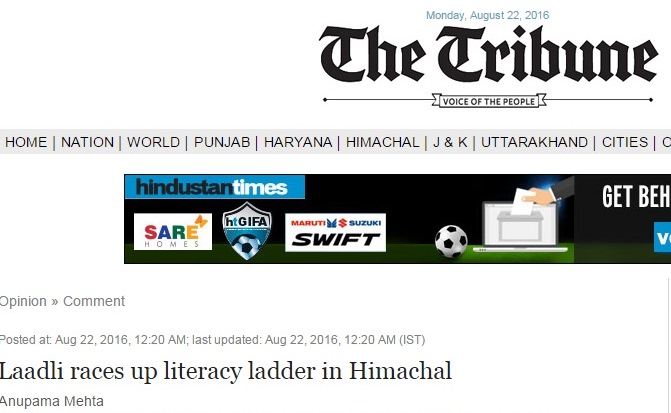 The lower social stratification in Himachal Pradesh facilitates a smoother implementation of social programmes than in other states. The state government’s campaign to promote “schooling as an essential part of every child’s upbringing” has made literacy an accepted norm.

A cherubic young girl carrying a heavy schoolbag on her drooping shoulders cheerfully negotiating the mountainous terrain with the hope of a bright future writ large on her face — this is the most endearing image of the schoolgoing girl child in the hill state of Himachal Pradesh. Through what is often described as “an ongoing schooling revolution” the state has literally taken girls’ education on a higher plane as it were.This is ratified by data from the India Human Development Survey (IHDS) the first large panel survey in India conducted jointly by the National Council of Applied Economic Research and University of Maryland for the same households at two points in time viz. 2004­-05 and 2011-­12.

Both the Public Report on Basic Education (PROBE Revisited: A Report on Elementary Education in India 2011) and the Census 2011 figures also show that Himachal Pradesh has fared much better in the field of primary education than some of its more prosperous neighbours. The PROBE surveys conducted in 1996 and 2006 respectively studied 48 villages in seven districts in Himachal Pradesh and interviewed 154 households. It was found that of the 285 children aged 6­12 years in the sample households only five had never been to school and the proportion of girls attending school was as high as 95 per cent which is very close to the IHDS figure. The Census of 2011 also calls the “schooling revolution” in Himachal Pradesh “even more impressive than that of Kerala” which has traditionally led the nation in literacy rates.

Reasons for the success

The state’s success in augmenting education levels for girls can be attributed to various factors most importantly its cultural background. The lower social stratification in the state facilitates a smoother implementation of social programmes than in other states. The state government’s campaign to promote “schooling as an essential part of every child’s upbringing” has made literacy an accepted norm. Himachal Pradesh is the only state in the country to spend Rs 1.03 per capita on education which is almost twice the national average.

Interestingly the educational expansion in the state has been achieved largely by government schools. The IHDSII records that 80.78 per cent of the girls aged 5­15 years were enrolled in government schools in 2011.The state places persistent emphasis on investing in rural infrastructure especially roads and government­run village schools even in remote tribal districts like Kinnaur Lahaul and Spitithus reducing inter­regional and genderbased disparities in educational levels.

Another factor that has pushed up primary level female literacy figures is parental interest combined with high levels of adult education in the state. The IHDS panel data (Table 1) shows a significant rise in both enrolment figures for girls aged 5­15 years and adult education levels in their households from 2004-­05 to 2011­12. The IHDS­II found that in these households only 7.15 per cent of the adult members were illiterate while the remaining 92.85 per cent had acquired various levels of education in sharp contrast to the all­India illiteracy figure of 24.33 per cent in 2011­-12. The PROBE survey also shows that 90 per cent of the parents in the state as opposed to 80 per cent in other PROBE states support compulsory primary education and 100 per cent said that they wanted their children to pursue higher education.

The IHDS and PROBE data are corroborated by the Annual Status of Education Report (ASER) based on an annual survey being conducted by Pratham since 2005 to evaluate the impact of educational programmes in the country. The ASER 2014 figures show that primary school children in Himachal Pradesh exhibit significantly high degrees of learning as compared to their counterparts at the all India level.

A refreshing finding of most surveys is the virtual lack of any gender bias among parents in the state. As many as 67 per cent of them as compared to merely 40 per cent in the other PROBE states stressed the need to educate their daughters so that they can benefit from “improved employment and income opportunities”.

Thus Himachal Pradesh has done a lot of things right where educating the laadli is concerned. If the high primary level literacy figures in the state are maintained the cherubic Himachali girl with her overloaded schoolbag could soon become a role model for laadlis in other states egging them on to pick up books and march towards a future filled with limitless hope and aspirations filled with limitless hope and aspirations.

Anupma Mehta is Consultant Editor at the National Council of Applied Economic Research. The views expressed are personal.