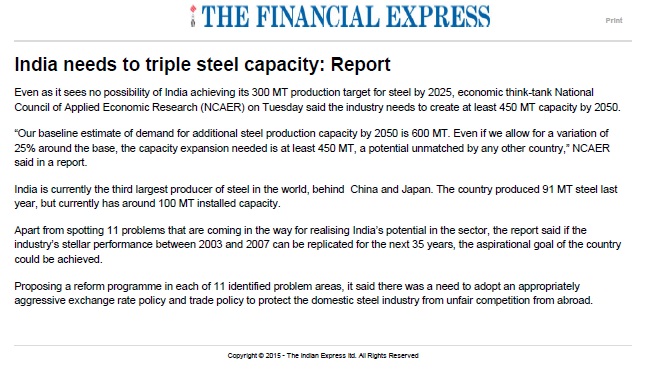 Even as it sees no possibility of India achieving its 300 MT production target for steel by 2025 economic think-tank National Council of Applied Economic Research (NCAER) on Tuesday said the industry needs to create at least 450 MT capacity by 2050.
“Our baseline estimate of demand for additional steel production capacity by 2050 is 600 MT. Even if we allow for a variation of 25% around the base the capacity expansion needed is at least 450 MT a potential unmatched by any other country” NCAER said in a report.
India is currently the third largest producer of steel in the world behind  China and Japan. The country produced 91 MT steel last year but currently has around 100 MT installed capacity.
Apart from spotting 11 problems that are coming in the way for realising India’s potential in the sector the report said if the industry’s stellar performance between 2003 and 2007 can be replicated for the next 35 years the aspirational goal of the country could be achieved.
Proposing a reform programme in each of 11 identified problem areas it said there was a need to adopt an appropriately aggressive exchange rate policy and trade policy to protect the domestic steel industry from unfair competition from abroad.

NCAER study on The Indian Steel Industry: Key Reforms for a Brighter Future was released on 6 October 2015. Know more