India needs a proper debate on the Land Act 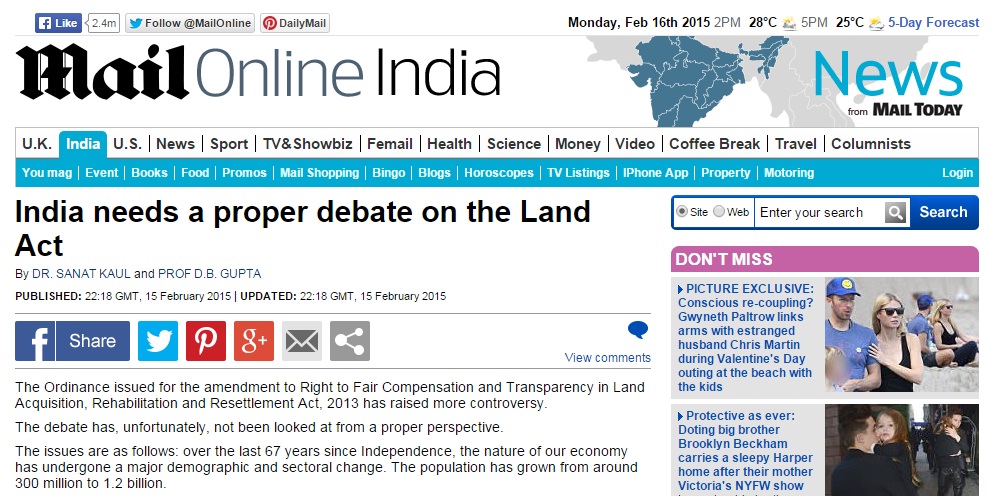 The Ordinance issued for the amendment to Right to Fair Compensation and Transparency in Land Acquisition Rehabilitation and Resettlement Act 2013 has raised more controversy.

The debate has unfortunately not been looked at from a proper perspective.

The issues are as follows: over the last 67 years since Independence the nature of our economy has undergone a major demographic and sectoral change. The population has grown from around 300 million to 1.2 billion.

Now the agriculture sector’s share has shrunk to barely 25% and that of the service sector has gone up to over 50%.

At the same time the rural-urban ratio which was 85%-15% around Independence is still 70% plus rural and nearly 30% urban. This aberration calls for a major rethink on our economic policy.

The erstwhile Planning Commission never had a spatial policy and if there was one it was to keep the rural population in rural areas as far as possible with planning for non-farm employment with doles like the Mahatma Gandhi National Rural Employment Guarantee Act (MGNREGA) scheme.

The Planning panel never thought in terms of a guided policy of urbanisation and urban-based industrialisation till the concept of Industrial Corridors/Special Economic Zones (SEZs) came up in the last few years.

In fact our policy sounded more like the Chinese policy which officially bans urban migration from rural areas in spite of massive industrialisation in urban areas leading to migrants in urban industrial areas as second-class citizens like our slum dwellers.

India saw voluntary migration into urban areas which did not plan for its growth leading to mushrooming of urban slums by illegal encroachment of public lands with slum population reaching 50% in many metro cities.

The response of the urban planners is to mitigate it by various slum improvement schemes and by the politicians to legitimise illegal settlements for votes.

This dismal state of affairs has gone on for too long. What India needs is to have a policy towards urbanisation and industrialisation. There should be a target fixed for urbanisation based on the data of present uneconomic agricultural holdings and further break-up due to the growth in rural population.

As the division of a family agricultural land leads to unviable holdings for a family to wreak a living out of it forced migration to cities by young adults looking for jobs takes place leading to growth of slums with its known consequences.

The Modi Government’s ‘Make in India’ policy of encouraging industrialisation is coming a day not too soon. Massive urbanisation is a necessity for India; not just to avoid rural unrest but also to get out of prejudices of caste and religion so entrenched in conservative rural India.

‘Make in India’ should be twined with an urbanisation policy to facilitate the process of transfer of young rural population smooth with as little pain as possible. This will also help in making agricultural holdings more viable. Side by side the MGNREGA should be tapered off.

Coming back to the Land Acquisition Act 1894 was made in British times and it continued to 2013 with some amendments. However land acquisition was for a public purpose which remained largely undefined. It was under this Act that the DDA acquired village after village for a purpose as amorphous as ‘large scale acquisition of land for development of Delhi’ without going into anything specific.

As a result the DDA became a land broker within the government and after development and conversion; it auctioned commercial and residential plots with windfall profits. Compensation was insignificant and the villagers were evicted from their land.

The new ordinance has however done away with clauses like the consent as mentioned above but it has not tampered rehabilitation. Land acquisition excesses are well known and governments both in the Centre and states including public sector undertakings already have huge tracts of land which are either not utilised or remain underutilized.

Most of the unauthorised occupied land belongs to the government and public sector undertakings.

There is an urgent need for a comprehensive urban-rural policy which should put a realistic target of urbanisation likely to take place in view of the fast fragmentation of agricultural land which making plots unviable.

A pan-India study basis through satellite imageries the lands available for urbanisation is needed. It should then make a road map for future urbanisation keeping in mind that urbanisation should not take away quality agricultural land.

While the Delhi–Mumbai Industrial Corridor type concepts are excellent minimum agricultural land should be acquired. We now have to plan for an urban population of at least 60-70%% in the next decade. This will relieve rural areas of the burden of over-population and under-employment uneconomic holdings and poverty.

What form the urbanisation should take place needs to be debated and decided and our industrial policy has to be based on it. If we do not do it massive urbanisation will continue to take place. In most developed countries the agricultural population is between 5-10%. Therefore we are sitting on a bomb and if we do not go in for spatial planning we will face massive rural unrest and slum growth in urban areas.

The erstwhile Planning Commission had hardly any policy in terms of spatial planning and mass migration. This was a major policy deficit on its part. The new incarnation NITI Ayog it is hoped will look into this important aspect and provide for a direction for a planned and incentivised migration from rural to attractive urban destinations taking into account the minimum land acquisition and use of redeveloped waste or saline lands which will not impact much on agriculture.

(Dr. Sanat Kaul is a former Secretary (Lands) Govt of NCT of Delhi and Prof D.B. Gupta is at National Council of Applied Economic Research (NCAER)