Food security in the time of inflation 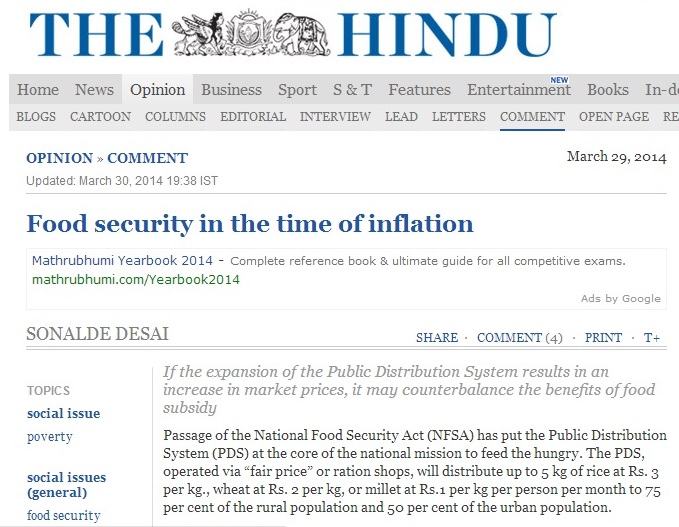 Passage of the National Food Security Act (NFSA) has put the Public Distribution System (PDS) at the core of the national mission to feed the hungry. The PDS operated via “fair price” or ration shops will distribute up to 5 kg of rice at Rs. 3 per kg. wheat at Rs. 2 per kg or millet at Rs.1 per kg per person per month to 75 per cent of the rural population and 50 per cent of the urban population.

Will the PDS be able to handle this scale of distribution? Will availability of practically free grains overcome the potential inconvenience of buying from a single shop? Will this allocation meet all the households’ cereal needs? Some of the data from the India Human Development Survey (IHDS) conducted by the National Council of Applied Economic Research and the University of Maryland provides a guide to the recent past. About 42000 households were surveyed in 2004-05 and once again in 2011-12 and provide an interesting description of how PDS has grown in importance for ensuring household food security in an era of rapid food price inflation.

PDS cards come in three flavours — Above Poverty Line (APL) Below Poverty Line (BPL) and the Antyodaya Anna Yojana for the poorest of the poor. Here we combine BPL and Antyodaya card holders. While the Central government decides on the proportion of a State’s population that is eligible for BPL status States identify which particular households should get which card using their own criteria.

Substantial efforts were made between 2006 and 2012 to improve targeting of BPL cards and expand the number of Antyodaya cardholders.

Did retargeting of PDS work? Comparing access to BPL cards across different income categories (using 2012 constant prices) paints a picture of the glass both half full and half empty. In 2005 44 per cent rural and 31 per cent individuals with monthly incomes of Rs. 300 or below had a BPL card; by 2012 this proportion had risen to 56 per cent (rural) and 36 per cent (urban). But while an effort was made to include the poorest affluent households also benefitted. Among households with monthly per capita incomes of Rs 2000-2500 the proportion of households with BPL cards grew from 25 per cent to 43 per cent in rural areas and from 15 per cent to 29 per cent in urban areas.

This low relationship between income and type of ration card is worrisome because it suggests that it is difficult for us to identify the poor and target subsidies. NFSA plans to provide subsidised grains to 75 per cent of the rural households so it should cover most of the poor; but for urban households where only 50 per cent are expected to receive BPL cards this inefficient targeting could be highly problematic with poor households being excluded from receiving subsidised grain while some middle income households benefit.

Apart from retargeting of PDS the years 2009-2012 also saw runaway food price inflation. So looking at the IHDS data from 2005 and 2012 allows us an opportunity to examine the role of PDS in household food security during times of high inflation.

The biggest change took place in people who actually purchased grains in PDS termed PDS off take. Only 25 per cent of the respondents purchased grain from the ration shops in 2004 but over 50 per cent did so in 2012. Food price inflation accounts for much of this increase but perhaps increasing efficiency of PDS shops could also account for some of the increase. People with APL cards are supposed to receive grains at the market price and only 12 per cent APL households purchased grain from PDS shops in 2005. By 2012 this proportion had risen to 29 per cent. Even if they had to pay the full PDS price in an era of rapidly rising prices full PDS price was still lower than the market price. This increase was particularly large in the cities. However since the quantities that can be purchased via PDS by BPL households is limited only about 4.5 kg of grains per month per person was purchased from PDS forming about 45 per cent of the total grain consumption. Once households decided to buy from fair price shops the amount they purchased was determined by the allowance and did not vary between two survey years or across different income groups.

These observations create an interesting quandary. On the one hand PDS has begun to play a far greater role in the household food consumption in recent years and with the expansion of its role under NFSA will be even more important. On the other hand it only covers less than 50 per cent of a household’s cereal intake. If the expansion of PDS results in an increase in market prices it may have a substantial negative impact on household budget and may well counterbalance the benefits of food subsidy.

While we have painted a national picture here regional differences in the importance of PDS in household food budget are vast. Whereas in north-central India only about 40 per cent of the people buy grains from ration shops nearly 85 per cent in the south use food from ration shops.

These observations suggest three major challenges for the country as we move forward. First identifying the poor is likely to remain a problem particularly for the urban areas. Second since PDS covers less than half of the households’ cereal budget if the expansion of NFSA affects cereal prices it will impact all households even those covered by NFSA. Third inter-State disparities will continue to persist given the complex equation between the Centre and the State in providing food subsidies.

(Sonalde Desai is with the National Council of Applied Economic Reasearch and the University of Maryland. This is Part 3 of the five-part NCAER series.)