FDI in food : Where would it take us to? 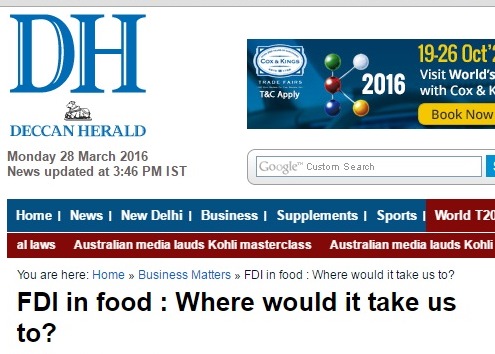 There is little doubt that Foreign Direct Investment (FDI) is associated with the diffusion of global best practices professionalism technology and work culture essential for market efficiency and competitiveness.

In the presence of internationally competitive environment ensured by FDI the domestic agencies are also motivated towards changes that bring efficiency. Studies have shown positive impact of FDI on economic growth and poverty reduction in several countries.

In the case of agriculture conditioned FDI up to 100% is already permitted in activities including floriculture horticulture apiculture and cultivation of vegetables and mushrooms under controlled conditions; development and production of seeds and planting material; animal husbandry (including breeding of dogs) pisciculture aquaculture under controlled conditions; Services related to agro and allied sectors and tea sector. As far as retail trading is concerned 100% FDI is permitted in single brand and 51% FDI is permitted in Multi-Brand Retail Trading (MBRT) with certain conditions.

Going further the Finance Minister while presenting the General Budget (2016-17) has made an announcement of allowing 100% FDI in marketing of food products that are produced and manufactured in India. It is believed that FDI in marketing of farm produce will provide impetus to food processing sector and it will also increase employment and income opportunities for farmers.

Why such a move of the government is important for the farm sector can be appreciated if we look at the macroeconomic data across related sectors.

Problems to be dealt with

For the last several years the economic situation in the primary agriculture sector has been marked with miniscule investment poor output growth and increasing labour cost. Huge expenditures made through MGNREGA have not translated into sustainable development of the sector. The real value added in agriculture and allied sector has inched from Rs 15.02 lakh crore in 2010-11 to Rs 15.84 lakh crore in 2014-15 at about 1.8% annual real growth. The crop sector which forms the bulk of the sector’s output has remained almost stagnant. Most of the gains are due to export led growth in fisheries and livestock based segments.

While many would like to put onus of the plight of farmers on weather conditions like draught it cannot be less emphasised that the real gross capital formation in agriculture sector has contracted from Rs 2.74 lakh crore in 2010-11 to Rs 2.54 lack crore in 2014-15 at almost -2.2% annually in real terms.

The value added in manufacturing of food products beverages and tobacco decreased from Rs 1.68 lakh crore to Rs 1.65 lakh crore in real terms during the same period. Thus one can say that the entire production system of the agriculture sector has remained under stress for several years.

Clearly there is a perceptible difference in the growth of production sector and trading sector related to agriculture produce. High value addition in trading and almost stagnant value addition in production reflects inefficiency in procurement and marketing system of agriculture produce and it’s processing which is also reflected in the wide gap in wholesale prices and retail prices of vegetable and other food products. There is asymmetry in price formation price discovery and cost of cultivation.

Realising these problems successive governments have tried to find a solution through the system of Minimum Support Price (MSP). Recently a progressive system of MSP (generally known as Swaminathan formula) has been proposed to keep it at least 50% above the cost of production. However this arrangement is less likely to yield a balanced outcome as traders would tend to pass the entire price increase to consumers. Thus while farmers may benefit from such a progressive MSP consumers would still suffer due to additional inflation. An efficient market that reduces trade and transport cost would still be essential for political sustainability of gains extended to farmers.

It is in this context that promoting organised marketing with FDI support aimed at reduction in cost of intermediation may be a preferred policy. This arrangement is likely to motivate cultivation and processing of high value products through concepts of contract farming. Involvement of corporate sector in marketing agriculture produce would also help in unifying the market at national level and solve the problems of fragmented farming and storage.

This can be further strengthened through application of modern technologies in production process and information sharing which could bring markets to the doorstep of farmers. Storage and transportation of perishable products is another area that can be benefitted with the introduction of state of art practices. It may be noted that the problem of agriculture sector are complex involving provisioning and efficient management of resource and inputs such as irrigation water soil health seed quality fertilizer pesticides among others which need financial and technical assistance for improving productivity.

It is also important to allay the concerns of opponents of FDI who tend to argue that the entry of Multi National Organisations would harm small traders. However the macroeconomic data presented earlier shows that value added in trading far outperform the value added at farm and processing level in agriculture and allied sector. Therefore a middle ground needs to be obtained.

Studies have shown that while it may be true that introduction of organised retailing tend to displace unorganised retail but such developments have clear benefits for the consumers in terms of price and variety; and provide greater employment opportunities for educated youth. Interestingly it is also found to be significant that displaced unorganised retailers quickly find ground and start earning even more profit at newer places in expanding cities (see for example several papers by Kalirajan and Singh). Thus the concerns raised against FDI in retail seem to be based on weak grounds.

The benefits of organised retail have been reported from several parts of India both in terms of increases in employment and remuneration. However there are some concerns also with respect to contracts and its enforcement inconsistencies in pricing process of product grading payment terms etc.

Substantial market power is demonstrated by the corporate purchaser as farmers do not have sellers power. For example once a vegetable product is grown it has to be sold. So the competition among buyers and the market concentration of buyers are the two main factors that decide the procurement price. High concentration (less number of buyers) of buyers or collusion among buyers is likely to force farmers to settle for lower price and undesirable payment terms.

Therefore it is expected that the New Policy would provide a framework that would be progressive fair and at the same time protect marginal farmers from exploitation. It should design a model code of contract leading to healthy environment of engagement between organised retailers and farmers.