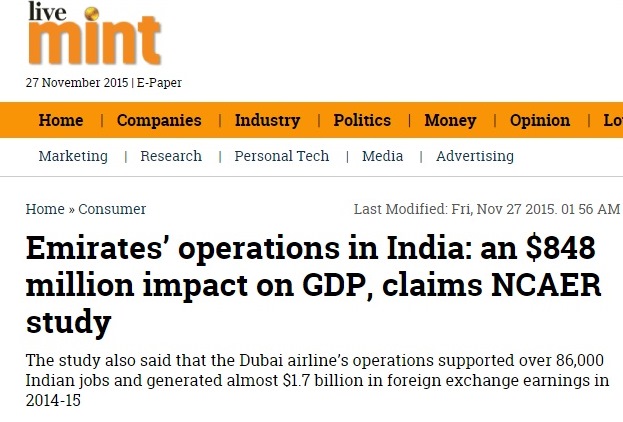 The study also said that the Dubai airline’s operations supported over 86000 Indian jobs and generated almost $1.7 billion in foreign exchange earnings in 2014-15.

Dubai’s Emirates airline which operated the largest number of international flights out of India until July this year when it was upstaged by the Jet Airways-Etihad Airways combine and a government refusal to grant it more flight rights quoted a study on Thursday to support its claim that its operations benefitted India’s economy making a case for additional flying rights.

The study commissioned by Emirates and conducted by the National Council of Applied Economic Research (NCAER) said the Dubai airline’s operations in India added $848 million to the country’s gross domestic product (GDP) supported over 86000 Indian jobs and generated almost $1.7 billion in foreign exchange earnings in 2014-15. An earlier study in 2012 conducted by NCAER for Emirates had said the operations added $596 million to the GDP and $1.1 billion in foreign exchange earnings in 2011-12.

Emirates which first flew to India in 1985 now operates 183 weekly flights to nine points across India. Nine out of 10 of these seats are full since 2008 and the airline has been pushing for permission to fly more—called bilateral rights—to India.

The large number of flights operated by Gulf carriers such as Emirates and Etihad to India has become a bone of contention in international aviation with airlines in the US and Europe alleging that the Gulf airlines are actually cornering India-US fliers by routing them through their hubs in Dubai and Abu Dhabi. There is discontent in India as well since state-run Air India which gets to fly to the Gulf in return for the bilteral rights India awards to Emirates and Etihad is unable to do so thanks to its poor financial shape.
“The NCAER study underlines the importance of air transport and its role as an economic driver in India. Aviation facilitates trade and tourism and creates employment in many different industries” Kazim said.

Kapil Kaul chief executive officer (South Asia) at consultancy firm CAPA India said the NCAER study demonstrates and quantifies the economic and social impact of aviation—both direct and indirect—on the economy. “Such studies especially done by reputed economic research firms like NCAER can support the larger policy formulation. Investment in connectivity is critical for economic development but it is not fully understood and recognized in India” Kaul said.

He acknowledged that Emirates for obvious reasons will use the study to seek more bilateral rights adding such formal and strategic methods should be welcomed.

Kaul also pointed to the other side of the story. “I would also like to see a study on how much Indian traffic rights and enhanced connectivity is contributing to Emirates and Dubai’s economy- both direct and indirect. This study if ever done will be very interesting as it will estimate the enormous value of India’s traffic rights. Indian market and continuing access is critical for Emirates’ business plan” Kaul adde

Early this year Emirates’ rival Etihad Airways PJSC claimed its investments in India have benefited the country’s tourism and aviation sectors besides helping Jet Airways (India) Ltd stage a recovery after a long period of losses. In 2013 Etihad Airways had picked up a 24% stake in Jet Airways.

For both airlines the largest market is India.

In February 2014 the aeronautical authorities of India and the United Arab Emirates (UAE) negotiated the first expansion of seat entitlements since 2008.

As a result Dubai-based airlines including low fare airline flydubai (run by Dubai Aviation Corp.) were awarded an additional 11000 seats per week.

The NCAER study models the economic value of potential future bilateral increases and forecasts that if Emirates were to operate an additional 4500 weekly seats between India and Dubai an additional 4800 jobs would be created foreign exchange earnings would rise to $1.8 billion with the arrival of almost 40000 more tourists a year.

“If the bilateral arrangements were expanded to allow an additional 13849 seats per week NCAER forecasts that Emirates’ operations would support 100405 jobs a year contribute $987.8 million towards GDP and boost foreign exchange earnings to $2 billion per year. Considering the breadth of Emirates’ network and how the demand for air travel is expected to double in the next 5-10 years in India Emirates is well positioned to bring a growing number of tourists and business travellers to the country further enabling trade and investment” Emirates said in a statement.

On 7 July Mint reported that Emirates’ domination of the international traffic to and from India had finally ceded the throne to domestic rival-Jet Airways.

“The airline’s economic contribution to the air transport sector is seen to percolate to the economy at large through various multiplier effects. The study predicts further escalation of economic benefits for the Indian economy as Emirates grows the number of seats into India. This growth would result in direct economic contribution multiplier effect on output and job-creation along with an induced effect on tourism. Apart from the quantified benefits from Emirates’ operations in India the identified qualitative benefits also entreat an expansion of its operation in India” Bandyopadhyay said.

On 16 June Mint reported that alarmed by Gulf airlines carving out a large slice of the lucrative India-US air traffic American Airlines Inc. United Airlines Inc. and Delta Air Lines Inc. had teamed up to protect their turf.

The three airlines on 5 March alleged that Dubai Abu Dhabi and Qatar collectively lavish subsidies worth $42 billion (around `2.7 trillion today) on the airlines they own—Emirates Etihad Airways and Qatar Airways respectively—tilting the playing field in their favour.

At the core of the squabble is the so-called sixth freedom traffic. Essentially sixth freedom is an airline’s right to fly from one foreign country to another stopping mid-way at its home base for non-technical reasons. For example when British Airways Plc. flies from India to the US via London it is protected by the sixth freedom right.

Capa expects growth of around 8-10% in international and close to 15% in domestic traffic this fiscal year.

This would result in international traffic increasing to 54-55 million and domestic traffic to around 80 million it said in a June report.