Column: Getting NITI Aayog to work 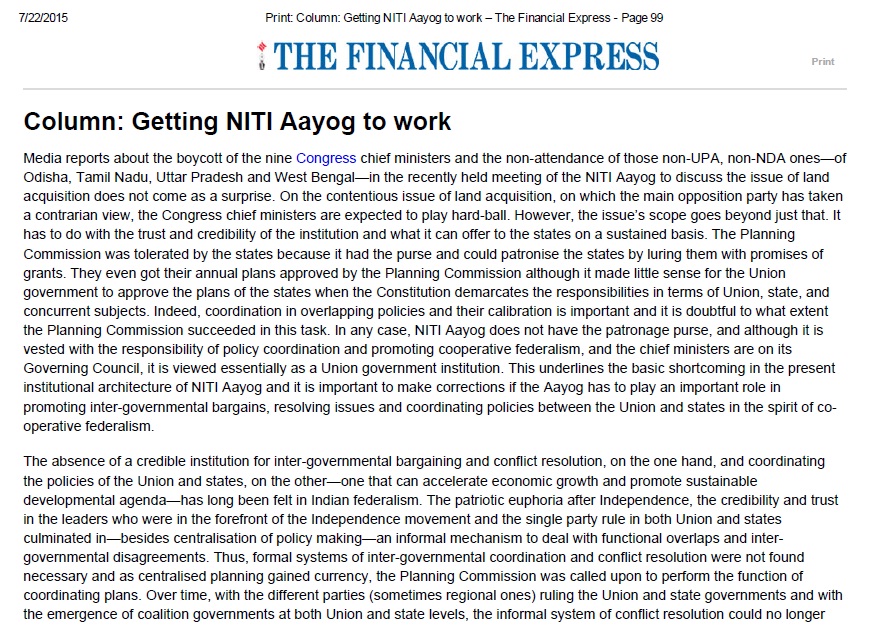 Media reports about the boycott of the nine Congress chief ministers and the non-attendance of those non-UPA non-NDA ones-of Odisha Tamil Nadu Uttar Pradesh and West Bengal—in the recently held meeting of the NITI Aayog to discuss the issue of land acquisition does not come as a surprise. On the contentious issue of land acquisition on which the main opposition party has taken a contrarian view the Congress chief ministers are expected to play hard-ball. However the issue’s scope goes beyond just that. It has to do with the trust and credibility of the institution and what it can offer to the states on a sustained basis. The Planning Commission was tolerated by the states because it had the purse and could patronise the states by luring them with promises of grants. They even got their annual plans approved by the Planning Commission although it made little sense for the Union government to approve the plans of the states when the Constitution demarcates the responsibilities in terms of Union state and concurrent subjects. Indeed coordination in overlapping policies and their calibration is important and it is doubtful to what extent the Planning Commission succeeded in this task. In any case NITI Aayog does not have the patronage purse and although it is vested with the responsibility of policy coordination and promoting cooperative federalism and the chief ministers are on its Governing Council it is viewed essentially as a Union government institution. This underlines the basic shortcoming in the present institutional architecture of NITI Aayog and it is important to make corrections if the Aayog has to play an important role in promoting inter-governmental bargains resolving issues and coordinating policies between the Union and states in the spirit of co-operative federalism.

The absence of a credible institution for inter-governmental bargaining and conflict resolution on the one hand and coordinating the policies of the Union and states on the other—one that can accelerate economic growth and promote sustainable developmental agenda—has long been felt in Indian federalism. The patriotic euphoria after Independence the credibility and trust in the leaders who were in the forefront of the Independence movement and the single party rule in both Union and states culminated in—besides centralisation of policy making—an informal mechanism to deal with functional overlaps and inter-governmental disagreements. Thus formal systems of inter-governmental coordination and conflict resolution were not found necessary and as centralised planning gained currency the Planning Commission was called upon to perform the function of coordinating plans. Over time with the different parties (sometimes regional ones) ruling the Union and state governments and with the emergence of coalition governments at both Union and state levels the informal system of conflict resolution could no longer succeed underlining the need for formal institutional mechanism. The Sarkaria Commission on Centre-State Relations recommenced the establishment of the Inter-State Council but the institution failed to take off as its location in the Union home ministry robbed it of the sense of non-partisanship and autonomy and the failure to assign the due importance to the institution undermined its significance. The National Development Council (NDC) created to coordinate development plans became mainly a body where the state chief ministers delivered prepared speeches. In the last 10 years there were only two meetings of the NDC. Even the regional councils like the North Eastern Council which were created to collectively represent the common interests in their dealings with the Union government have failed in this task.

The Cabinet Resolution establishing the NITI Aayog states that the Aayog would promote “…co-operative federalism through structured support initiatives and mechanisms with the states on a continuous basis”. There are a number of areas requiring coordination due to considerable overlap in carrying out legislative and executive functions in concurrent subjects. The recent years have shown the need for co-operation in areas such as energy and environment education and poverty alleviation where the need for coordinated action and speedy decisions are critical for pursuing the developmental agenda. Further the Union government may have to intervene in the national interest even if these areas are in the state or in the concurrent list. The subject of land is in the concurrent List and given the contrarian stands taken by the ruling and opposition parties the government perhaps thought that NITI Aayog is the right forum to discuss the issue before it is debated in Parliament. Perhaps it was thought that assigning the responsibility to the states like in the case of labour laws is a strategic move as the forces of inter-state competition might create a “favourable” climate for land acquisition. However it remains to be seen how the policy will shape. The issue complicated as it involves a variety of interests representing land holders and industrialists.

The most important issue which the NITI Aayog will have to deal with is the rationalisation of centrally-sponsored schemes. The committee appointed by the Aayog with the chief minister of Madhya Pradesh as its chairman is reported to be finalising the report and consolidating the number of schemes to about 30. This comes in the wake of the Union government reclassifying the schemes in the Union Budget after the 14th Finance Commission increased the states’ share of taxes in the divisible pool to 42% as compared to 32% by the previous commission. The problem with this arrangement is that the states’ committee is likely to recommend the continuation of the same level of assistance if not higher. This will catch the Union government in a bind because acceptance of the recommendation will erode its own fiscal space and not accepting it will undermine credibility of the process. Perhaps the Union government should have thought more seriously about implementing the recommendation of the Finance Commission which recommended that the schemes should be designed and implemented with representations by the Union states and domain experts in the spirit of cooperative federalism.

In order for the NITI Aayog to play an effective role in inter-governmental coordination and conflict resolution the states will have to see it as a non-partisan institution facilitating the process by working with both Union and state governments objectively. This requires appropriate structure status and trust. It is important that the Aayog is given statutory status and powers if it has to function effectively. Unlike the Planning Commission the NITI Aayog does not have the powers to give grants and if that is given then it will only perpetuate the patronage system. It can play the role of impartial arbiter and adviser only when it is given the statutory powers and status and the inter-state council is placed within the Aayog. In the absence of this it would be difficult to see the Aayog effectively playing the role assigned to it and the states developing confidence and trust in it.