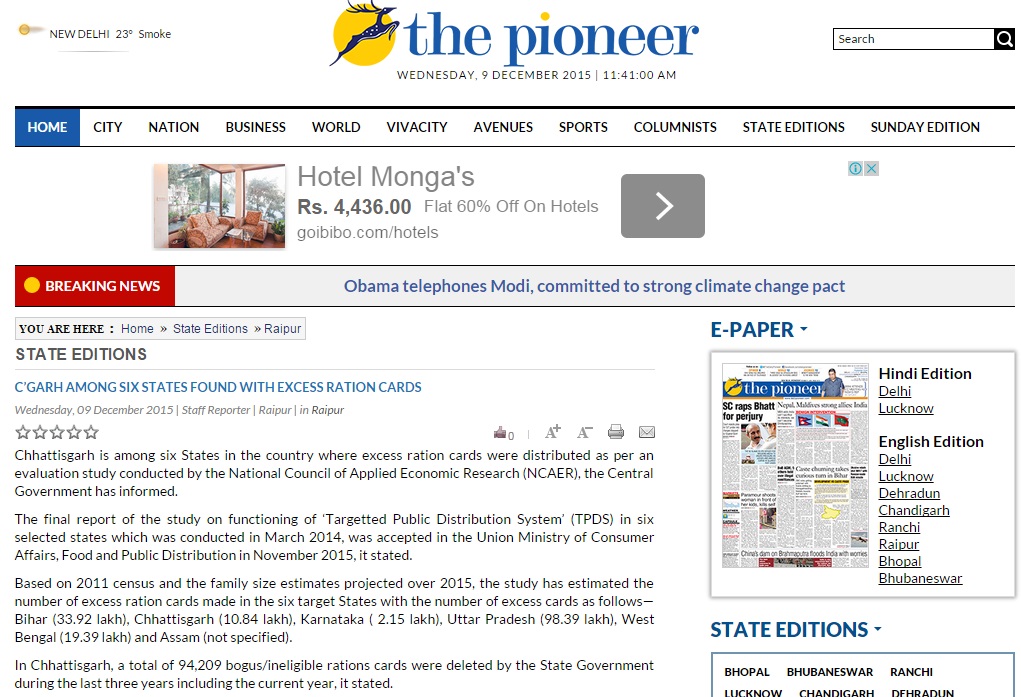 Chhattisgarh is among six States in the country where excess ration cards were distributed as per an evaluation study conducted by the National Council of Applied Economic Research (NCAER) the Central Government has informed.

Based on 2011 census and the family size estimates projected over 2015 the study has estimated the number of excess ration cards made in the six target States with the number of excess cards as follows—Bihar (33.92 lakh) Chhattisgarh (10.84 lakh) Karnataka ( 2.15 lakh) Uttar Pradesh (98.39 lakh) West Bengal (19.39 lakh) and Assam (not specified).

In Chhattisgarh a total of 94209 bogus/ineligible rations cards were deleted by the State Government during the last three years including the current year it stated.

The TPDS (Control) Order 2015 notified on March 20 2015 also calls for all the necessary action to be taken by states and Union Territories for review of list of beneficiaries and deletion of bogus /ineligible ration cards.

To curb leakages further under the National Food Security Act 2013 (NFSA) inter alia states and Union Territories have been asked to either do cash transfer of food subsidy under Direct Benefit Transfer (DBT) or install electronic Point of Sale Device (ePoS) at the Fair Price Shops  (FPSs).

There are 23 other States in the country which have also achieved 100 per cent digitisation of the PDS database officials stated.

It has prepared a comprehensive action plan for ensuring total transparency in the preparation of ration cards besides evolving a mechanism for error-free identity of Public Distribution System (PDS) beneficiaries.

Under the action plan the mobile bank account and Aadhaar numbers of the beneficiaries are being collected.

Food Civil Supply and Consumer Protection Minister Punnulal Mohle had stated earlier that the State Government has also made a provision of `4700 crore for implementation of ‘Chief Minister Food and Nutrition Security scheme’ in the State Budget 2015-16.

The Government had made a provision of `1.75 crore in the form of extension of ‘Core PDS’ for its ‘Meri Marzi Scheme.’

About 90 per cent of the masses are covered under Food and Nutrition Security Act was implemented in 2013 officials stated.

He had urged the Central Government to provide two-kg ‘Daal’ (pulses) at `10 per kg to the Antyodaya and Priority and below poverty card-holders under the National Food Security Act .

Mohle said that the Central Government provided subsidised ‘Daal’ underthe Public Distribution System till 2012 and later it was stopped.