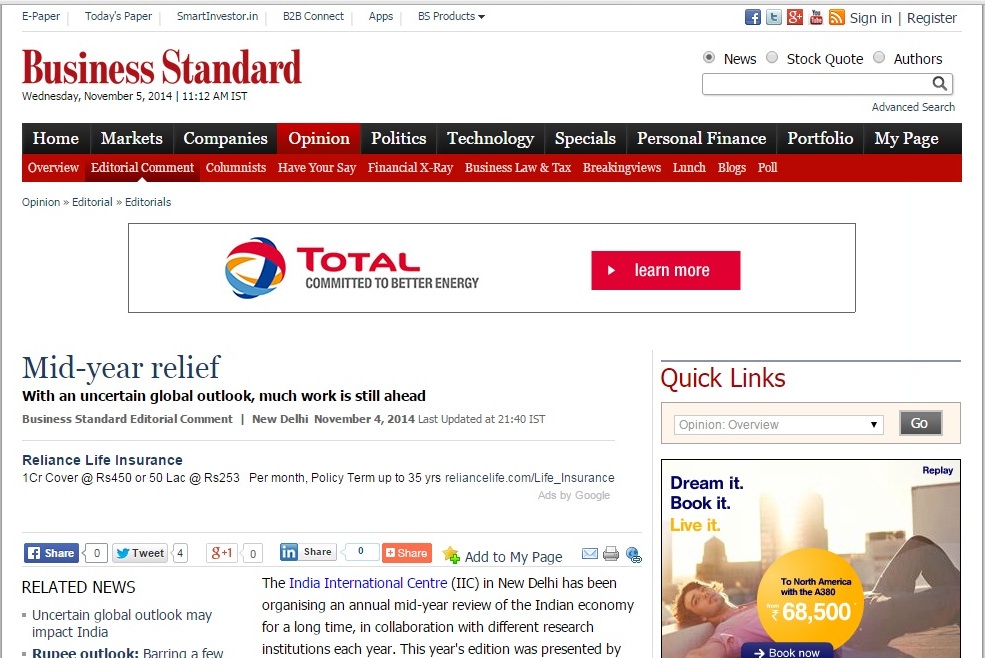 With an uncertain global outlook much work is still ahead

The India International Centre (IIC) in New Delhi has been organising an annual mid-year review of the Indian economy for a long time in collaboration with different research institutions each year. This year’s edition was presented by the National Council of Applied Economic Research (NCAER). This kind of stock-taking exercise had significant value in earlier years when data were published after long lags and the community of analysts was relatively small. With shorter data lags and many more analysts the economy is being assessed in virtually real time; the mid-year exercise has diminished in utility. However this has not been a normal year for some obvious reasons domestically but equally for some very important global reasons. Making a collective assessment based on all these developments certainly has value in this context. The IIC-NCAER report presents a balanced picture clearly highlighting several positives but also cautioning about looming risks and bottlenecks.

On the external front against a backdrop of the rollback of its unconventional monetary policy by the United States Federal Reserve and a dramatic decline in oil prices the situation for India has become quite positive. Rising expectations of the new government aggressively pursuing structural reforms and the narrowing of the current account deficit or CAD which will be sustained by lower oil prices have induced a surge in foreign portfolio investment. Both better prospects for returns and a significant reduction in currency risk have played a part in this. India’s vulnerability to the reversal of global liquidity conditions now appears rather low; foreign investors are clearly preferring it to several other emerging market economies many of which are experiencing significant slowdowns in growth. Going forward currency risks will remain muted as long as oil prices persist at current levels. This is a dramatic change from the high levels of vulnerability that a surging CAD had created over the past three years.

Oil prices also have very positive implications for the fiscal situation. Without lifting a finger fuel and fertiliser subsidies will shrink making it that much easier for the government to exceed its deficit target for the year even if revenue collections fall short of estimates. Of course this favourable development has been reinforced by the decision to de-regulate diesel prices and the movement towards putting an aggregate cap on liquefied petroleum gas subsidies. The government’s resolve will be tested if and when oil prices rise sharply but for the moment good luck and good policy make a powerful combination.

Does all of this translate into better growth prospects? The report itself is somewhat hedged in its forecast but seems to largely endorse the 5.5-6 per cent range for the current year’s growth in gross domestic product. It points out that some global forecasters have turned much more positive but perhaps caution is appropriate here; it takes a while for favourable macroeconomic conditions to translate into accelerating growth. The global economic outlook has turned bearish. This is not good news for the Indian economy. While India will benefit from lower commodity prices its exports and therefore the domestic growth that they fuel are likely to suffer. Besides many structural impediments remain one or more of which could dilute or offset the benefits of the current combination of good luck and good policy. Reassuringly the report is far more positive about declining inflation; lower oil prices will help to counter at least for a while other persistent inflationary pressures. In short the Indian economy at mid-year 2014-15 looks good but there is much work ahead.