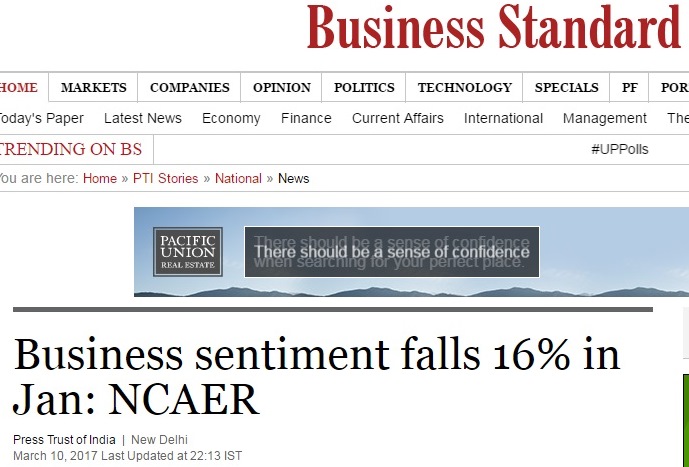 The business sentiment in the country fell by 16 per cent in January over the previous quarter says a survey by economic think-tank NCAER.

Prior to this the N-BCI had risen consecutively for two quarters in July (2.2 per cent) and October 2016 (7.2 per cent) on a q-o-q basis the National Council of Applied Economic Research (NCAER) said.

NCAER’s 99th round of the Business Expectations Survey (BES) shows that the NCAER Business Confidence Index (N-BCI) fell by 16 per cent in January 2017 on a quarter-on-quarter (q-o-q) basis.

It further said that the N-BCI fell by 14 per cent on a year-on-year (y-oy) basis.

The NCAER said the fall in the N-BCI has been driven by a deterioration in sentiments in all the four components that have equal weights in the composition of the BCI.

“The percentage of respondents saying that ‘the present investment climate is positive’ slipped from 50 per cent in October 2016 to 39 per cent in January 2017” it pointed out.

Although the business sentiments of firms across sectors showed a decline in all types of firms in January 2017 versus October 2016 the magnitude of the decline varied across sectors.

“The consumer goods sectors showed the steepest decline in BCI as compared to the other sectors. The BCIs of the consumer non-durables and durables sectors fell by 27.8 per cent and 19.5 per cent on a q-o-q basis respectively” it pointed out.

While the BCI declined in all the four regions on a q-o-q basis the statement said the North exhibited the maximum deterioration in sentiment with the BCI falling by 38 per cent followed by the East registering a decline of 11.9 per cent in sentiment.

“The magnitude of the decline was lower in the West and the South. The southern region continues to show the highest BCI among all the regions” it said.

In particular the consumer goods sector including both the durables and non-durables sectors showed a dampening of spirit on all fronts it said.

Besides the NCAER Political Confidence Index (N-PCI) showed a q-o-q fall of 18.9 per cent between January 2017 and October 2016.

Among the eight components of the PCI six showed a worsening in terms of the percentage of positive responses between October 2016 and January 2017 the survey said.

As regards the remaining two components it pointed out that “managing the exchange rate” remained virtually unchanged and “managing inflation” exhibited an improvement on a q-o-q basis.

“The PCIs fell across sectors firm size and ownership but showed a mixed performance on the basis of region” it said.

The National Council of Applied Economic Research (NCAER) has been conducting the Business Expectations Survey (BES) every quarter since 1991.

It tracks the business sentiments of over 500 Indian companies to compute the composite Business Confidence Index (BCI).