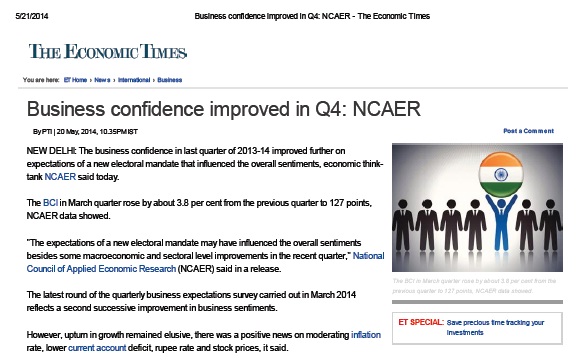 The BCI in March quarter rose by about 3.8 per cent from the previous quarter to 127 points NCAER data showed.

“The expectations of a new electoral mandate may have influenced the overall sentiments besides some macroeconomic and sectoral level improvements in the recent quarter” National Council of Applied Economic Research (NCAER) said in a release.

The latest round of the quarterly business expectations survey carried out in March 2014 reflects a second successive improvement in business sentiments.

However upturn in growth remained elusive there was a positive news on moderating inflation rate lower current account deficit rupee rate and stock prices it said.

The improvement was not uniform it said three-fourth components of BCI showed a higher level of optimism.

“While expectations of improved financial position is the main factor behind the increase in overall confidence the lower ratings on investment climate remain the area of concern in the present survey.”

In line with the BCI the Political Confidence Index ( PCI) also showed improvement in the present round of the survey from 112.9 points in January 2014 to 136.6 points in April 2014 it said.

The survey was based on a sample of 495 respondents which was conducted ahead of the Lok Sabha election in April.