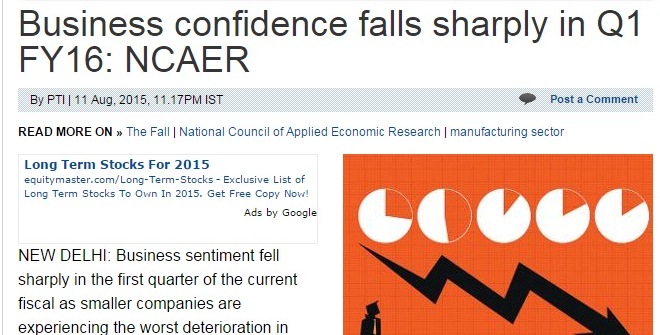 Business sentiment fell sharply in the first quarter of the current fiscal as smaller companies are experiencing the worst deterioration in business sentiments says a NCAER survey.

“The 93rd round of Business Expectations Survey (BES) carried out in June 2015 reveals that business sentiments have not only continued to decline but are declining at a more rapid pace.

“The Business Confidence Index (BCI) decreased by 11.9 per cent over the previous quarter on a quarter-on quarter basis and by 15.1 per cent on a year-on-year basis” said the survey by economic think-tank National Council of Applied Economic Research (NCAER).

All components of BCI showed negative change between April and July 2015 it added.

Commenting on the survey NCAER fellow Bornali Bhandari said “The decline of business sentiments specially related to the investment climate is particularly worrisome because this may be perceived as a signal for lower future investment and thereby for economic growth.”

“Further the fact that smaller companies are experiencing the worst deterioration in business sentiments is a matter of concern both for growth and equity” he added.

As per the survey the services sector showed a marginal improvement in the BCI (2.6 per cent).

The fall in BCI for consumer durables was the steepest.

“The PCI fell by as much as 17.7 per cent over the last quarter on a q-o-q basis and 16.2 per cent on a y-o-y basis.  All components of PCI show a deteriorating trend” it said.

NCAER has been conducting Business Expectations Survey (BES) every quarter since 1991.

It tracks the business sentiments of over 500 Indian companies to compute the composite index—Business Confidence Index.