Financial Sector Reforms in India: The Past and the Future

Dr Raghuram Rajan, Governor of the Reserve Bank of India delivered NCAER’s 4th C. D. Deshmukh Memorial Lecture on January 29, 2016 to an audience of distinguished economists, civil servants, industry analysts, and economics students.  Dr Bimal Jalan, Chairman of India’s Expenditure Management Commission and former President of NCAER’s Governing Body and former Governor of the Reserve Bank of India was the Guest of Honour at the Lecture.

NCAER instituted this Lecture series in 2013 in memory of one of India’s most eminent economists and a founding father of NCAER. Established in 1956, NCAER is India’s oldest and largest independent, non-profit, economic policy research institute. NCAER’s work cuts across many sectors, including growth, macro, and trade, infrastructure, labour, and urban, agriculture and rural development, human development, and consumers. The focus of NCAER’s work is on generating and analysing empirical evidence to support and inform policy choices. It is also one of a handful of think tanks globally that combine rigorous analysis and policy outreach with deep data collection capabilities, especially for household surveys. NCAER is celebrating its 60th anniversary in 2016. More information on NCAER is available on www.ncaer.org.

Said Dr Shekhar Shah, Director-General of NCAER, “This is a very special evening for a number of reasons. First, not only are we honouring the first Indian Governor of the Reserve Bank of India and one of NCAER’s founding fathers, but we are privileged to have both Dr Raghuram Rajan and Dr Bimal Jalan with us.”

He went to say, “Second, 2016 marks the 60th Anniversary of NCAER.  The founding fathers of NCAER, including Sir C D Deshmukh, made a promise in 1956 to the nation of serving both government and industry with economic and social data of the highest scientific quality, with empirical research of the highest order, and with solid evidence to drive policymaking in India. Today we launch our 60th year celebrations with a renewal of this promise.”

Dr Shah concluded, “It is totally appropriate that the Lecture will take place in the Nehru Memorial Library, a stone’s throw from the very house in which Pandit Jawahar Lal Nehru spent his life as the first Prime Minister of India.  It was on Nehru’s request that Dr Deshmukh and others came together in 1956 to conceive, and then implement, the idea of an institution of national importance for applied economic research. And it was Nehru who laid the foundation stone of NCAER’s office building not too far from here.”

In a wide-ranging address, Dr Rajan emphasized the supreme importance of maintaining macroeconomic stability.  He said, “Macroeconomic stability will be the platform on which we will build the growth that will sustain our country for many years to come, no matter what the world does… Let me … reiterate that we have absolutely no intent of departing from the inflation framework that has been agreed with the Government. We look forward to the Government amending the RBI Act to usher in the monetary policy committee, further strengthening the framework.”

Talking about how best to clean up bank balance sheets, he said “we believe enough capital is available. While the profitability of some banks may be impaired in the short run, the system, once cleaned, will be able to support economic growth in a sustainable and profitable way. To be less proactive, as our past and the history of banking across the world suggests, will only see the problem get bigger and less manageable.”

Dr Raghuram Rajan became the 23rd Governor of the Reserve Bank of India in September 2013. He was earlier the Chief Economic Advisor to the Government of India and the Eric J. Gleacher Distinguished Service Professor of Finance at t 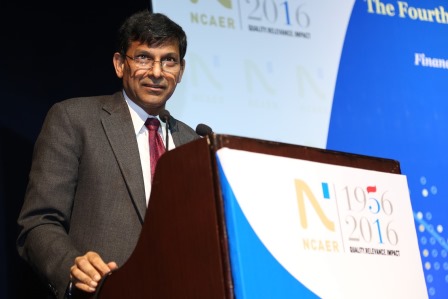 he University of Chicago’s Booth School of Business and Non-resident Senior Fellow at NCAER. He has been the Economic Counsellor and Director of Research at the International Monetary Fund (2003–2006). Dr Rajan chaired the Indian Government’s Committee on Financial Sector Reforms (2007–2008). He was the President of the American Finance Association in 2011 and is a member of the American Academy of Arts and Sciences.  Dr Rajan was the recipient in 2003 of the first Fischer Black Prize awarded by the American Finance Association for the best finance researcher under the age of 40. He received the Global Indian of the Year award from NASSCOM in 2011, the Infosys Prize for the Economics Sciences in 2012, the Center for Financial Studies-Deutsche Bank Prize for Financial Economics in 2013, Euromoney’s Central Banker of the Year Award 2014, and Central Banking’s Central Banker of the Year Award 2015.  Rajan’s work spans a range of areas in Financial Economics.  Dr Rajan has a BTech in Electrical Engineering from IIT Delhi, an MBA from IIM Ahmedabad, and a PhD from MIT.

Dr Bimal Jalan is one of India’s best known economic policymakers. He is currently the Chairman of the Government of India’s Expenditure Management Commission. He was the 20th Governor of the Reserve Bank of India (1997-2003) and was thereafter nominated a member of the Rajya Sabha.  He was the President of NCAER’s Governing Body during 1992-1993 and 1998-2008.  He has served as India’s Chief Economic Adviser, Banking Secretary, Finance Secretary, Member-Secretary of the Planning Commission, and Chairman of the Economic Advisory Council to the Prime Minister. He has represented India as Executive Director on the boards of the International Monetary Fund and the World Bank. He has written extensively on the Indian economy.  His latest books include Emerging India: Economics, Politics & Reforms (Penguin, 2012) and, co-edited with P. Balakrishnan, Politics Trumps Economics: The Interface of Economics and Politics in Contemporary India (Rupa, 2014).

Previous C. D. Deshmukh Memorial Lectures include the 2013 Inaugural Lecture by Professor Kaushik Basu, Senior Vice President and Chief Economist of the World Bank and a Nonresident Senior Fellow at NCAER.  Basu spoke on “Grassroots Welfare Schemes and Macroeconomic Choices: India’s Dilemmas”. This was followed in 2014 by a lecture by Dr Arvind Panagariya, now Vice Chairman of NITI Aayog,  on “A Reform Agenda for India’s new Government.”  The 2015 Lecture was by Mr David M. Malone, UN Under-Secretary-General and the Rector of the United Nations University on “From Millennium Development Goals to Sustainable Development.”