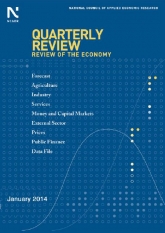 Agriculture
Agrichultural forecasts suggest record production of foodgrains in a year with rainfall, six per cent above normal. However, management of foodgrains continues to challenge policymakers due to lack of infrastructure. Food inflation in other food categories continues to haunt Indian citizens.

Industry
Industry remains in the doldrums with neither output nor gross capital formation showing any sign of revival. Various attempts have been made by the government to try and improve sentiment and revive animal spirits but have not borne fruit as yet. The political uncertainty caused by the impending general elections is expected to weigh hugely on sentiment and cast a dampener on the sector for the remaining part of this fiscal and possibly, the first quarter of the next fiscal as well. The only hope is that the pickup in global growth might provide an export-led stimulus to the sector.

The services sector, long regarded as the main prop of robust economic growth in the country, has not been immune from the overall slowdown. Lead indicators from the second quarter suggest the momentum is unlikely to pick up in the remaining part of the year. Services exports may prove an exception to the generally subdued trend given that these are a function of global growth.

Both money and capital markets exhibited lower volatility during the third quarter compared to the second quarter, primarily because the global environment was less turbulent and hence the overhang from external forces was also markedly less pronounced. Surprisingly, the much-awaited announcement of tapering by the US Federal Reserve on 18 December 2013 did not have the tumultuous impact witnessed earlier in the year when mere talk of the possibility of such tapering in May 2013 led to mayhem in both markets.

Export performance was robust during the third quarter, partly on account of the sharp depreciation in the exchange rate of the rupee and partly on account of a modest recovery in major advanced economies. The improvement in exports together with a moderation in imports, especially gold imports, contributed to a narrowing of the trade deficit to $110 billion during the period April – December 2013, i.e. 25% lower than the corresponding period last year. The reduction in trade deficit in Q2 saw the current account deficit fall to $5.2 billion (1.2%) of GDP, down from $ 21 billion in the same quarter of 2012-13. Trade data numbers from the DGCI&S for Q3 suggest the improvement seen in Q2 is likely to continue. We expect the full year CAD to fall to less than 2.5% of GDP. The exchange rate has been fairly stable since mid-September 2013, despite the US Fed taper, effective January 2014.

The bigger question is what to track – WPI or CPI? WPI is moderating and getting closer to the comfortable zone. However, CPI continues to be close to double digits. The month of December is bringing signs of moderating retail inflation but the upside risks remain. The challenge before the policymakers is how to bring down inflationary expectations which may be caught in a self-fulfilling cycle

Given the Finance Minister’s assurance, on more than one occasion, that he would not cross the fiscal deficit to GDP target of 4.8% for the current fiscal, chances are he will prove his skeptics wrong and deliver on his promise. However, the quality of the fiscal adjustment is just as important as the numerical number. And here the unfortunate reality is that, as in the previous fiscal, the containment of the FD is likely to be done through the wrong kind of expenditure compression. Plan expenditure is likely to be squeezed, once again.
National Growth and Macroeconomic Centre
Sponsored by:
NCAER
Download