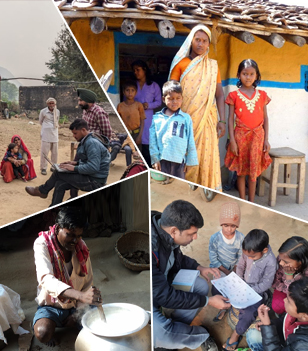 India Human Development Surveys I (2004-5), II (2011-12) and the present IHDS-III form part of a collaborative research program between researchers from the National Council of Applied Economic Research and the University of Maryland. The goal of this program is to document changes in the daily lives of Indian households in a society undergoing rapid transition.

The IHDS seeks to provide the first large nationwide panel for Indian households. Its main objective is to assess the social and economic transformation in India over a period of time. In order to accomplish that, all the households surveyed during IHDS-1 in 2004–05 were re-surveyed in 2011–12 as part of IHDS-2. With a re-contact rate of over 83 per cent, this panel provides an excellent opportunity to study changes in Indian society during an era of rapid social transformation. The third round of the panel has been launched and field work for the project has begun in May 2022.

The IHDS is a highly regarded public resource with over 11,000 users for Rounds 1 and 2. More than 500 papers have been published using these data. Along with the advent of IHDS-3, analysis of the prior rounds continues, reflected in a large number of publications in 2020-21. The IHDS team also continues to support data users and send monthly newsletters highlighting research undertaken using IHDS data.

To know about IHDS I and II click here