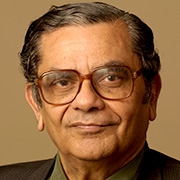 Jagdish Bhagwati is University Professor (Economics, Law, and International Affairs) at Columbia University. He has been economic policy adviser the Director-General of GATT (1991-93), special adviser to the UN on globalization, and external adviser to the WTO. He has served on the expert group appointed by the director-general of the WTO on the future of the WTO and was  a member of the Eminent Persons Group on the future of UNCTAD. Recently, he has been co-chair with President Halonen of Finland of the Eminent Persons Group on Developing Countries in the World Economy. He received his BA in Economics from Cambridge University and a Ph.D. in Economics from MIT.