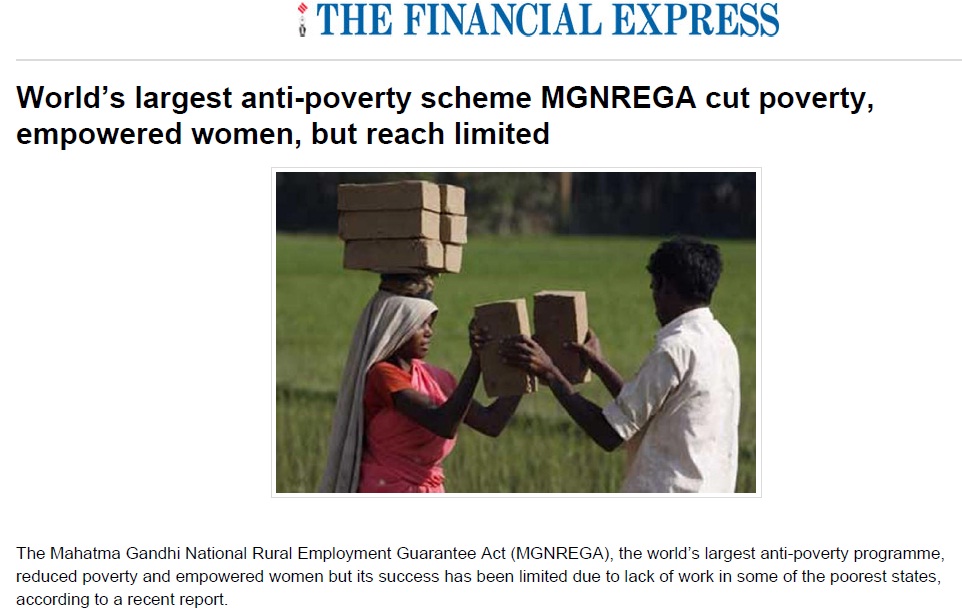 The Mahatma Gandhi National Rural Employment Guarantee Act (MGNREGA) the world’s largest anti-poverty programme reduced poverty and empowered women but its success has been limited due to lack of work in some of the poorest states according to a recent report.

Comparing two states Chhattisgarh (strong programme implementation) and Bihar (weak) a study by the National Council of Applied Economic Research and the University of Maryland found that nearly 60% of the poor participate in MGNREGA infrastructure projects in Chhattisgarh while barely 11% of poor households participate in Bihar due to lower capacity of local administration.

According to the report only 24.4% of rural households participate in the rural employment scheme in the country while nearly 70% of the interested households could not participate due to lack of work.

The report on the rural job scheme was based on interviews with over 28000 households spread across rural India. The interviews were conducted in 2004-05 before the initiation of MGNREGA and again in 2011-12 after the programme was implemented.

The study found that at least 25% of the decline in poverty since 2004-05 for participating households could be attributed to participation in the rural employment scheme. These households are less likely to borrow from moneylenders and more likely to give higher education to their children according to the analysis.

Outlining the positive impact of MGNREGA the report said that for the first time women are being paid at par with men in a job and that women outnumber men in the job scheme.  As many of the women got work for the first time due to the job scheme  their household income levels also went up.The MGNREGA has also boosted access to a bank account by women as the wages are transferred electronically to the beneficiary’s account.

“The most striking impact of MGNREGA participation is on women who dominate MGNREGA work” said Sonalde Desai senior fellow at NCAER and one of the author of the report.

The report also found that the success of the job programme was hampered in many states due to lack of work as lengthy local processes for project approvals delayed projects reducing access to work and abandonment of projects before completion.

“Work rationing seems to be pervasive with about 40% of rural households working less than the 100 days they are eligible for in spite of their desire to work” said Prem Vashistha one of the authors of the report.

The report found that there was little correlation between poverty levels of a state and its level of MGNREGA participation.

Developed states did better in giving jobs to the needy due to their better administrative capacity and infrastructure compared to poor states like Bihar. The rural job guarantee law mandates that work should be made available whenever households ask for it.