With 2.35 Average Overnight Trips Per Year, Sikhs Lead the Travellers Among all Religions 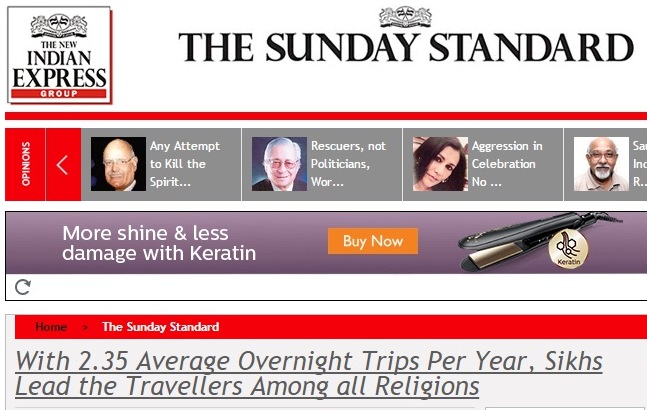 Highest incidence of trips is seen in J&K with 836 per 100 households followed by Himachal. Delhi at the bottom.

NEW DELHI: Indians are going places—travelling fast and furious. Domestic tourism is not only driving economy it is also an indicator of consumption pattern of the country’s citizens.

A tourism ministry study has put the Sikhs at the top of the heap when it comes to making most number of trips by a person in a year followed by the Jains.

“The overall average number of overnight trips made by a person was estimated at 2.09. The averages differed among the religions. The average overnight trips by the Sikhs was (2.35) followed by Jains (2.19) Hindus (2.13) Christians (1.94) Muslims (1.82)” says the study conducted by the National Council of Applied Economic Research (NCAER) for the ministry.

The report of the study ‘How households of different socio­economic background spend on tourism’ submitted recently relied on the 2008­09 National Sample Survey (NSS) data to make its observations.

“The average number of overnight trips made by a rural person was estimated at 2.10 while for urban person it was 2.07. Incidence of overnight trips is observed as the highest among Sikh persons in rural areas (2.37) and among Jains (2.34) in urban areas. While analysing incidence of trips by age groups of the visitors highest trips per person is made by those belonging to 30­59 years of age­groups and this is followed by persons belonging to 15­29 years age­group” the report says.

“In India shopping is the most important item of expenditure for Scheduled Tribe Scheduled Caste and Other Backward Class” the report states.

Legislators senior officials and managers among all professionals record the highest per overnight trip expenditure in India of about `2294.9.

In another study NCAER took into account how states performed on the domestic tourism front. Average trips made by a household are four during a year.

On an average at all­India level contribution of social trips to total trips works out to be 74 per cent. This is followed by religious trips and medical trips which account for 10 per cent and 6.2 per cent respectively of the total overnight trips. Business and leisure trips together account for only 5.3 per cent of the total trips.

Leisure or holiday is among the least popular purposes of domestic overnight trips across all the states. The highest share (6.7 per cent) of leisure trips in total is seen in Delhi.

Social trips are undertaken the most in Uttar Pradesh while Maharashtra Andhra Pradesh and Tamil Nadu together account for 44 per cent of total religious trips. Tamil Nadu is the most sought­after by domestic leisure tourists (12.5 per cent of total interstate leisure trips) according to the tourism ministry study.