To insure or to assure the farmer?

In view of the rain-induced crop damage in the southern States crop insurance is once again likely to come into focus. Majority of the agricultural households (70 per cent) own land less than one hectare (2018-19). Farmers are vulnerable to crop failure occurring due to natural or man-made calamities. How do we protect the farmer? The traditional method followed in India has been crop insurance.

Publicly provided crop insurance for farmers has existed since the early 1970s. The latest one Pradhan Mantri Fasal Bima Yojana (PMFBY) was introduced in kharif 2016. Some of the advantages of PMFBY include: (i) no cap on premium to facilitate farmers to get claim against full sum insured; (ii) individual farm level assessment and settlement of claims for localised calamities and post-harvest losses when crops are kept in the field for drying and (iii) use of remote sensing smartphones and drones for quick estimation of crop losses to ensure early settlement of claims.

The PMFBY portal shows that the coverage has reduced from 22 States in 2018 to 19 by 2021 kharif season. The corresponding numbers for rabi season are 21 and 11. Why are States signing out of this scheme?

Under the PMFBY the premium paid by farmers is fixed at 1.5 per cent of the sum insured for rabi crops 2 per cent for kharif crops and 5 per cent for cash crops. The balance is equally shared by the Centre and States. The Scheme is implemented on an ‘area approach basis’ that is defined areas for each notified crop with the assumption that all the insured farmers in a unit of insurance face similar risk exposures incur identical cost of production per hectare earn comparable farm income and experience similar extent of crop loss due to the various calamities in the notified area.

The scheme involves multiple stakeholders. States carry the burden of activities including selection of insurance areas and crops estimation of threshold yield and extent of damage selection and coordination with insurance companies and timely payment of State’s share of premium (the Centre matches its share only after States pay their due). The NCAER had conducted an assessment of progress and prospects of Direct Benefit Transfers (DBT) of States and UTs in 2018. The assessment included the PMFBY which in turn yielded useful insights.

States had reported about the challenges that they faced in the scheme itself. First several States/UTs reported delays in claim settlements due to lack of adequate manpower. The delays notwithstanding the PMFBY portal showed that 96 per cent of the reported claims had been settled with regional variations.

Second the ‘area approach’ of the scheme could not take care of the damage caused by calamities such as hailstorms which can differently affect two adjacent pieces of land especially in hilly States. Alternatively States/UTs could offer specific single peril risk/insurance cover with or without opting for base cover which would tackle such damage an amendment in 2020.

Third in a State where the average loss of major crops (wheat and paddy) has remained below 10 per cent for long insurance does not seem viable for the farmers. This is because a crop loss of less than 10 per cent renders them ineligible for insurance whereas they pay their PMFBY premium nevertheless.

Fourth post-harvest losses like loss in mandis due to long wait are not covered.

Fifth the scheme was made voluntary in kharif 2020 instead of being mandatory for loanee farmers. Sixth many States felt their premiums added to their budget burden and were spent on insurance companies vis-a-vis farmers.

The NCAER study found that Bihar was implementing the ‘Crop Assistance’ Scheme as an alternative to the insurance model (Table 1). Farmers did not have to pay any premium. They were eligible for assistance up to 2 hectares and if shortfall in yield was more than 20 per cent of the average of last five years.

Farmers are more vulnerable than ever before due to global warming. The challenge is to stabilise farmers’ incomes. A comparison of insurance and assurance informs us that both can co-exist. While large farmers can be provided insurance small and marginal farmers sharecroppers/tenants can be provided assurance. With Central support implementation should be left to the States. Impact evaluation studies of both types of schemes would be helpful for policymaking. 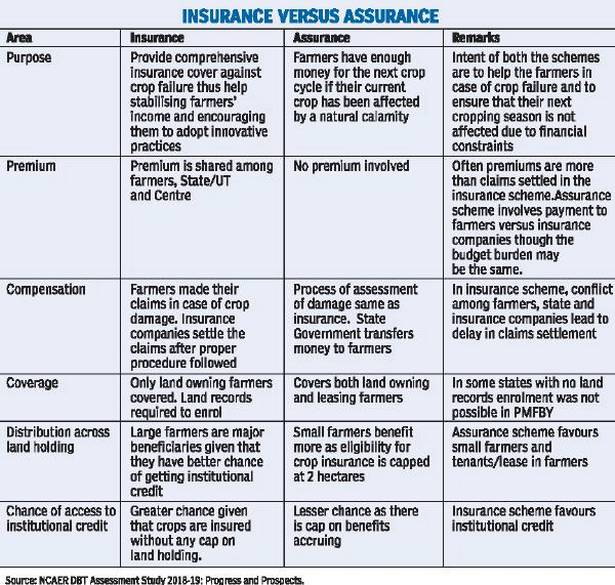 Sahu is a Senior Research Analyst and Bhandari is a Senior Fellow at NCAER. Views expressed are personal.