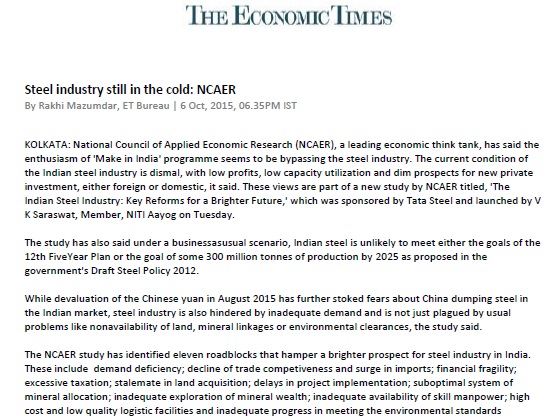 KOLKATA: National Council of Applied Economic Research (NCAER) a leading economic think tank has said the enthusiasm of ‘Make in India’ programme seems to be bypassing the steel industry. The current condition of the Indian steel industry is dismal with low profits low capacity utilization and dim prospects for new private investment either foreign or domestic it said. These views are part of a new study by NCAER titled ‘The Indian Steel Industry: Key Reforms for a Brighter Future’ which was sponsored by Tata Steel and launched by V K Saraswat Member NITI Aayog on Tuesday.

The study has also said under a business¬as¬usual scenario Indian steel is unlikely to meet either the goals of the 12th Five¬Year Plan or the goal of some 300 million tonnes of production by 2025 as proposed in the government’s Draft Steel Policy 2012.
While devaluation of the Chinese yuan in August 2015 has further stoked fears about China dumping steel in the Indian market steel industry is also hindered by inadequate demand and is not just plagued by usual problems like non¬availability of land mineral linkages or environmental clearances the study said.
The NCAER study has identified eleven roadblocks that hamper a brighter prospect for steel industry in India. These include ¬¬ demand deficiencyÍ¾ decline of trade competiveness and surge in importsÍ¾ financial fragilityÍ¾ excessive taxationÍ¾ stalemate in land acquisitionÍ¾ delays in project implementationÍ¾ suboptimal system of mineral allocationÍ¾ inadequate exploration of mineral wealthÍ¾ inadequate availability of skill manpowerÍ¾ high cost and low quality logistic facilities and inadequate progress in meeting the environmental standards expected of a modern steel industry. To remove these roadblocks comprehensive reforms and not just tinkering at the margin with present policies and practices are needed.
In light of these findings NCAER has suggested that the government should bring out a White Paper on steel sector with inputs from industry economists market analysts upstream and downstream players and policymakers. “The white paper should examine what is needed in the short medium and long term to realize the full potential of the sector” the study said.
“Many of the investments made during the last upturn are coming on stream just when the demand for steel remains weak because of the yet uncertain investment climate in India and globally” Ramgopal Agarwala the study’s principal author said.
However the study found that steel industry has a high potential in India. The Make in India programme was launched in 2014 designed to make India a global manufacturing and supply¬chain hub. The manufacturing revolution will need steel which is 2% of India’s GDP and 16% of industrial share. India’s steel industry is younger compared to other major economies with aging steel sectors and little prospect of high growth. If economic growth accelerates the production of steel should increase manifold over the next few decades.
While pointing out that a move from the current stressed state to realising the sector’s full potential will not be easy the study also presented a roadmap for policies and practices for government and industry to ensure its long term growth prospects.
NCAER study on The Indian Steel Industry: Key Reforms for a Brighter Future was released on 6 October 2015. Know more
Published in: The Economic Times , October 6, 2015
Download