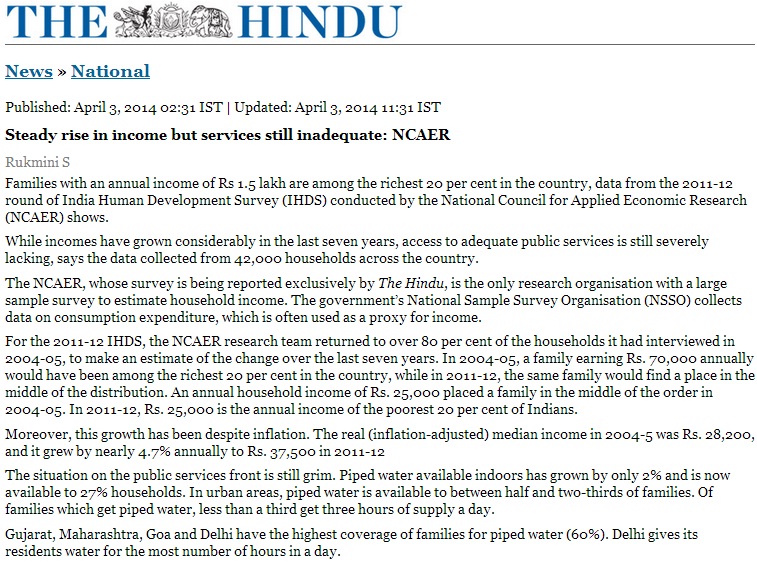 Families with an annual income of Rs 1.5 lakh are among the richest 20 per cent in the country data from the 2011-12 round of India Human Development Survey (IHDS) conducted by the National Council for Applied Economic Research (NCAER) shows.

While incomes have grown considerably in the last seven years access to adequate public services is still severely lacking says the data collected from 42000 households across the country.

The NCAER whose survey is being reported exclusively by The Hindu is the only research organisation with a large sample survey to estimate household income. The government’s National Sample Survey Organisation (NSSO) collects data on consumption expenditure which is often used as a proxy for income.

The situation on the public services front is still grim. Piped water available indoors has grown by only 2% and is now available to 27% households. In urban areas piped water is available to between half and two-thirds of families. Of families which get piped water less than a third get three hours of supply a day.

Gujarat Maharashtra Goa and Delhi have the highest coverage of families for piped water (60%). Delhi gives its residents water for the most number of hours in a day.

Flush toilets are now accessible to one-third of all households and over two-thirds of urban households. Toilet coverage is the highest in Kerala (92%) Delhi (79%) and Punjab (74%).

Access to electricity is inching towards becoming universal with 83 per cent of all households getting supply. Jammu and Kashmir Himachal Pradesh and Delhi have 100% access to ‘some electricity’. No State had reached this milestone in 2004-05. Just 45% households with access to power get 18 hours or more of electricity in the day. Himachal Pradesh Punjab Kerala Delhi and Gujarat lead the country in terms of supply of 18 hours or more.