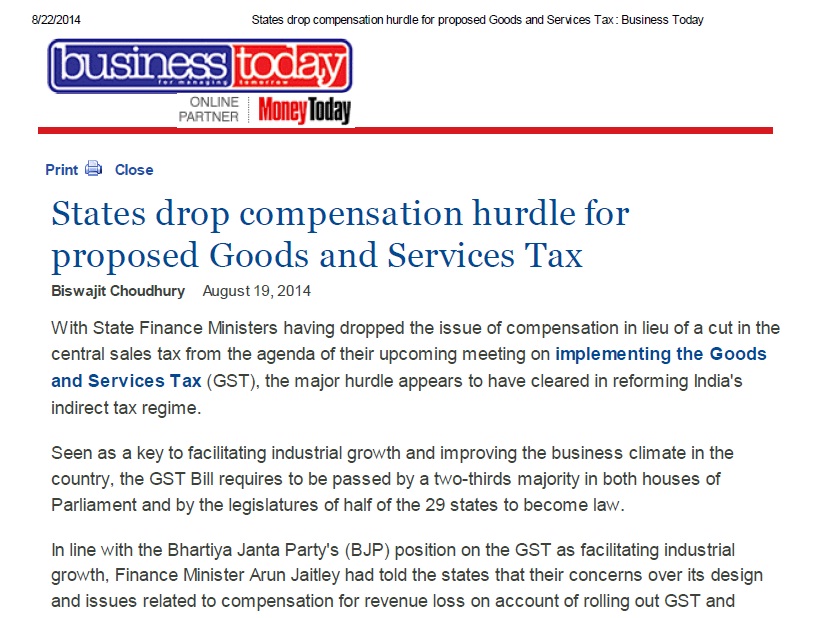 With State Finance Ministers having dropped the issue of compensation in lieu of a cut in the central sales tax from the agenda of their upcoming meeting on implementing the Goods and Services Tax (GST) the major hurdle appears to have cleared in reforming India’s indirect tax regime.

Seen as a key to facilitating industrial growth and improving the business climate in the country the GST Bill requires to be passed by a two-thirds majority in both houses of Parliament and by the legislatures of half of the 29 states to become law.

In line with the Bhartiya Janta Party’s (BJP) position on the GST as facilitating industrial growth Finance Minister Arun Jaitley had told the states that their concerns over its design and issues related to compensation for revenue loss on account of rolling out GST and phasing out the central sales tax (CST) regime would be suitably addressed.

CST was one of the major roadblocks for a GST which was originally scheduled to come into from April 1 2010.

While CST is levied by the centre on inter-state movement of goods but is collected by the states the issue of compensation arose because the centre cut CST from four percent to two percent in phases after state-level value added tax (VAT) was introduced from April 1 2005.

By subsuming most indirect taxes levied by the centre and the states such as excise service tax VAT and sales tax GST proposes to facilitate a common market across the country leading to economies of scale and reducing inflation through an efficient supply chain.

The previous UPA government had introduced a bill in parliament proposing a GST council and a dispute resolution panel for fixing the rate of the new tax for both states and the centre. However the bill had received stiff opposition from the states including the BJP-ruled ones like Gujarat and Madhya Pradesh.

“States are likely to lose substantial revenues in the new regime” Madhya Pradesh Chief Minister Shivraj Chouhan wrote in a letter to Jaitley adding that states’ experience in receiving compensation for CST losses in the past was not very satisfactory.

“Unfortunately article 268A has not been operationalized in the last 10 years. Kindly operationalize the Constitution (88th Amendment) Act and fulfill the promise made during the previous NDA regime till we have the required IT infrastructure to effectively deal with the complexities in the proposed GST regime” he wrote.

“Some states have been apprehensive about surrendering their taxation jurisdiction others want to be adequately compensated. I do hope we are able to find a solution in the course of this year and approve the legislative scheme which enables the introduction of GST” Jaitley had said in his maiden budget speech in the Lok Sabha in July.

On the design of GST states are insisting that petroleum and alcohol be kept out of its purview . The Empowered Committee of state finance ministers has also demanded that the centre’s share of GST should be made a part of the divisible pool between the centre and the states.

The finance minister has assured parliament that the government will seek to move the amendments to the constitution this year itself for implementing GST besides already assuring states that he would clear their CST compensation dues of about Rs.34000 crore ($5.5 billion) over a three-year period.

States like Gujarat Madhya Pradesh and Uttar Pradesh which were earlier standing in the way of GST have now said they are not opposed to it as long as their concerns are addressed.

Full implementation of GST could lift India’s gross domestic product (GDP) growth by 0.9-1.7 percentage points according to a study by the National Council of Applied Economic Research (NCAER).

Wednesday’s meeting between the states and the centre that will take the discussions on GST to the next level will be the first after the presentation of the budget for 2014-15 in the Parliament.