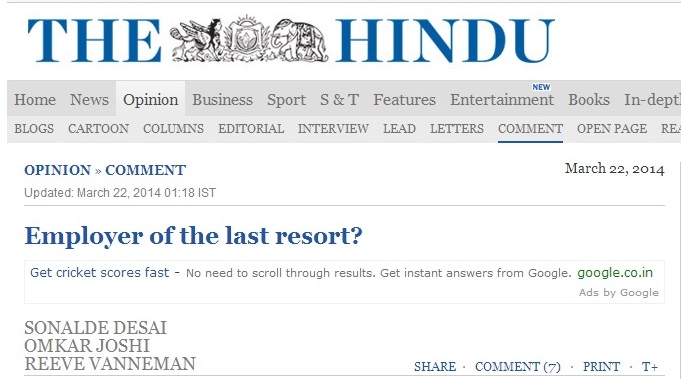 In an era of growing globalisation and rising inequality the Mahatma Gandhi National Rural Employment Guarantee Act (MGNREGA) stands out as a unique attempt to provide a social safety net via a massive public works programme. The government as an employer of the last resort is an idea that has existed in policy discourse around the world for much of the 20th century gaining most currency during the Great Depression in the United States. However MGNREGA takes this policy to a new realm because of its massive reach universal nature and its initiation during a period of rapid economic growth.

It is a good time to explore the reach and impact of MGNREGA. India Human Development Surveys of 2004-05 and 2011-12 organised by the National Council of Applied Economic Research (NCAER) and the University of Maryland surveyed about 27000 rural households in 2004-05 before the Act was passed and in 2011-12 when the programme was implemented in all districts. Hence it provides a unique opportunity to examine household well-being before and after the implementation of the Act.

Our scorecard on MGNREGA focusses on three issues: (i) The reach and targeting of the programme; (ii) Experience of the households that participated in MGNREGA; and (iii) Broader changes in the rural labour markets between 2005 and 2012.

Regardless of the discrepancy between administrative statistics and actual usage the programme is remarkably well-targeted. This targeting operates at three levels. At the village level the uptake in villages with low levels of infrastructure is higher (28 per cent) than in villages with better infrastructure (21 per cent). It is more difficult to organise new programmes in more backward areas so MGNREGA’s success in achieving this goal is quite remarkable.

For those households that participate in MGNREGA the income from MGNREGA forms about 14 per cent of their total income. While the Act mandates payment in cash for people who are not offered work we found few respondents knew about this provision and even fewer availed of it.

It is not clear whether MGNREGA is providing alternative sources of work or attracting people who were formerly underemployed or disguisedly employed. The IHDS data document an increase of just five days of work for men over a 12- month period in rural areas and four days for women. This is not a massive increase suggesting that some of the MGNREGA work may have replaced rather than added to former work.

The IHDS also documents other changes in rural labour markets. Among workers non-farm work has grown substantially while an exclusive agriculture focus has declined. The proportion of individuals who focus solely on agricultural activities— cultivation agricultural labour and animal care— has gone down from 51 per cent of men aged 15-59 to 35 per cent; for women the drop is from 84 per cent to 66 per cent. Much of this drop comes from changes in agricultural wage work and caring for animals; own-account cultivation is unchanged. While we do not know that MGNREGA caused these changes the alternative non-farm employment is certainly part and parcel of broader changes in rural labour markets.

These wage increases for women are particularly interesting. Historically the lack of non-agricultural work has constrained women’s wages. If MGNREGA is in any way associated with the growth in women’s wages this is a positive outcome. But these observations may also point to a real concern for farmers — a possible lack of availability of agricultural workers and high wages during harvest time. Rising agricultural wages for both men and women and simultaneously declining agricultural wage work suggest that it would be a sensible precaution to ensure that MGNREGA work is not timed for the peak agricultural periods.

The above discussion has noted several concerns with MGNREGA particularly the discrepancy between official data and household reports on usage as well as the potential wage impact. But we have also noted that the programme has been particularly successful in providing employment to Dalits Adivasis and women thereby serving as an attractive employer of the last resort to the most disadvantaged workers.

(Sonalde Desai Omkar Joshi and Reeve Vanneman are with the National Council of Applied Economic Research and the University of Maryland. This is Part 2 of a five-part series on the NCAER’s new household survey. The views expressed are personal.)