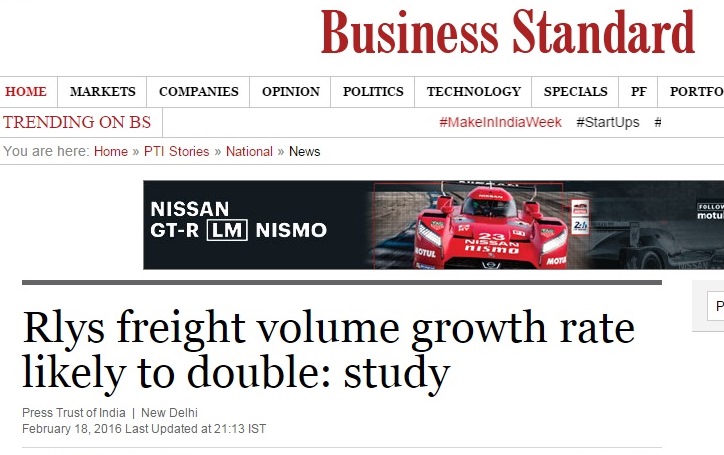 Railway Freight volume is likely to grow by 2.1 per cent in the next fiscal as compared to its one per cent growth in 2015-16 according to a study.

Railways had asked the economic think-tank NCAER for the study ahead of the Railway budget 2016-17 to focus on Railway’s freight business and to identify the reasons for the recent plateauing of its growth to around one per cent per annum for bulk freight commodities including coal iron ore cement steel fertilisers and foodgrains and container traffic.

The NCAER study also estimates the likely volume demand in 2016-17 for railway freight. Freight accounts for nearly two-thirds of railway’s revenue spread over two broad categories bulk and other goods according to a release.

Deficient rainfall and two drought years in a row have lowered rural demand. Industry too remains sluggish due to low investment demand.

Alongside industry growth in gross value added in 2015-16 for the mining and quarrying sector railway’s largest client is estimated to be 6.9 per cent as compared to 10.8 per cent in 2014-15.Crucial components of core infrastructure coal steel cement and electricity also showed a decline in their growth rate for April-December 2015 as compared to their performance in 2014-15.

Railways freight charges have gone up by 67 per cent in the last five years while there has been a decline in fuel prices. Road transport for freight has now become much cheaper than rail.

Among the policy reforms suggested by the NCAER study are correcting the fare/freight ratio; providing for periodic reviews of surcharges like the port congestion surcharge and busy season surcharge; steps to encourage short lead traffic; a review of the dual pricing for iron ore and review of transportation product design to cater to market requirements of smaller parcel sizes.