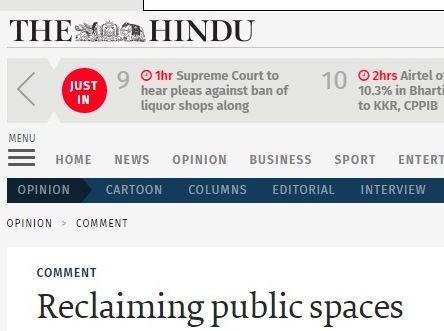 Walking through a rural market in Myanmar recently I was shocked to see it dominated by women vendors and buyers. In rural Indian markets particularly in the north women vendors are few and shoppers are frequently accompanied by men. The India Human Development Survey (IHDS) of over 42000 households across the country organised by the University of Maryland and the National Council of Applied Economic Research (NCAER) shows that in 33% of the households all the food shopping was done by men and 22% of the women did not go to a local kirana shop alone. This is quite an omission given that the primary cooks in 98% of these households were women.

Women’s reluctance to venture alone into public spaces such as kirana shops spills over into more serious areas. Over 30% of the women surveyed said they would not go to a local doctor or health centre alone. Anecdotally many doctors said that mothers wait too long to bring a sick child to a health centre; they wait until their husbands come home.

This exclusion of women from public spaces is an integral part of Indian life; yet we have no way of knowing how pervasive sexual harassment is as it is missing from our daily conversations. We will probably never be able to find data that tell us how many women have faced some form of harassment. However the IHDS statistics reveal a pattern. In 2004-05 when male respondents were asked how often women/ girls are harassed in their neighbourhoods 14% said that this happened at least sometimes while 20% of the women in the same households reported the prevalence of harassment in the same neighbourhoods. In 2011-12 when the same households were interviewed again the proportion of male respondents reporting harassment increased to 21% and women to 31%.

Many elements of these statistics are noteworthy. First the question was about harassment in neighbourhoods where young women usually live close to their harassers (who are acquaintances or neighbours and not unknown perpetrators). Thus the figure of 20-30% women reporting harassment is quite high. Second women seem to consistently report more harassment than men in the same households/neighbourhoods. This suggests that either women don’t tell men in their families about incidents of harassment or men are unwilling to acknowledge and talk about it. Third reported harassment increased sharply between 2004-05 and 2011-12 by nearly 10 percentage points. It is not clear whether there is an increase in harassment or a greater willingness to talk about it.

Data however offer us little clue on where the harassment is concentrated. Although female residents of metro cities in 2011-12 reported more harassment in their neighbourhoods (39% versus less than 30% in villages and small towns) harassment is reported in almost all areas and affects both the rich and the poor. There are few studies of actual experiences of harassment and among studies that exist under-reporting remains a serious challenge. However the consequences of sexual harassment on the way families and young women view their options places they can travel to and spaces they can occupy have more to do with perceptions of safety than the experience of violence. Women who live in neighbourhoods where they don’t perceive the possibility of sexual harassment are 1.33 times more likely to be comfortable going to a health centre alone than those who live in neighbourhoods where harassment is pervasive.

Day-to-day aggressions that women and girls face in their own neighbourhoods is not violence perpetrated by strangers; it is the aggression young men visit upon women who share their community. Craig Jeffrey formerly with Oxford University who has extensively studied young men in Meerut College notes that many young men especially those unemployed seem to feel that they are entitled to aggressively express their masculinities through what they euphemistically call ‘eve-teasing’. Eve-teasing is not harmless as it leads to restrictions on women’s mobility and shuts them out of public spaces.

Laws against eve-teasing and sexual harassment are necessary but not sufficient to address this challenge. The 2017-18 Budget committed to setting up Mahila Shakti Kendras in rural India. Can we re-emphasise the ‘shakti’ part of this mandate and strengthen these institutions? Young women must be prepared to reclaim their lives from harassment and young men must be taught to take pride in a masculinity that stands in solidarity with women.

Sonalde Desai is Professor of Sociology at University of Maryland and Senior Fellow at the NCAER. Views are personal