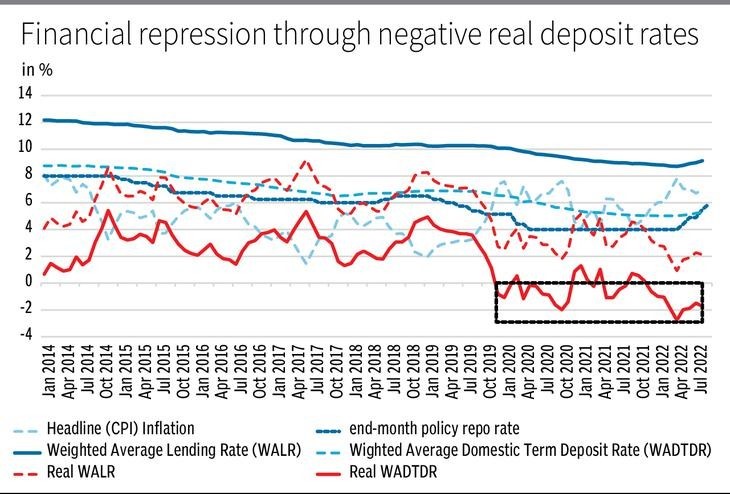 Amid high inflation and exchange rate pressures, rate hikes and tight liquidity are the best bet.

The RBI has been broadly getting its act right amid difficult circumstances. In my assessment, it has traversed about three-fourths of the amplitude of the current rate hiking cycle, but the economy is stronger than before.

It belies the misconception that if RBI starts hiking rates, the nascent recovery from the pandemic would be nipped in the bud. The RBI has demonstrated its ability to act on both sides of the business cycle. It may have been trifle slow to start normalising but has almost made up for that.

After completing my term at the MPC, I had publicly stated that the terminal rate in this tightening cycle could be 6.5 per cent, though RBI could turn data dependent after raising policy rate to 6.0 per cent. The cycle is broadly evolving along those lines. It is heartening to see RBI shed its panache for forward guidance that was constraining policy flexibility. Even so, the third successive 50 bps rate hike at end-September after an initial 40 bps did not surprise or disrupt the market.

Forward guidance may have served a useful role in the early period of the pandemic but has long over-lived its utility. If RBI had in this end-September policy gone on to hint anything on terminal (maximum) policy rate in this cycle or the time till which it would continue to hike rates, it would have only tied itself in knots at the time when global uncertainty is extremely high, and agility of response is needed to maintain macro- financial stability.

In my view, the MPC has got the rate hike quantum right. Turning to smaller rate hikes would have been premature at this stage and would have misguided markets besides adversely impacting central bank credibility. The economy is rather strong and inflation is still well above the target.

The RBI has more work to do to do bring down inflation within the target range to soft- land the economy first and then move it very close to the point target of 4 per cent in a two-year period so that gains from inflation targeting in anchoring expectations are not lost and higher growth over medium-to long-run is realised on the back of a stable environment.

The one dissent in the MPC on the quantum of rate hike is, therefore, not very material. While one does anticipate some slowing down of the economy ahead, four things need to be kept in consideration.

First, the RBI has some catch-up move left as real deposit rates are still negative and can further feed into widening current account deficit (CAD) that is mirrored by saving- investment gap. Unless the economy slows down markedly in coming quarters, the CAD/GDP ratio is likely to be about 3.4 per cent this year, perceptibly higher than indications of below 3.0 per cent CAD from the central bank. The central bank may be talking of bringing down the currency pressures, but even at 3.0 per cent the CAD is not sustainable and, therefore, the rate hikes are helpful.

Second, the RBI need not match the Fed’s rate hike quantum 1:1 as inflation is a bigger problem in the US vis-a-vis the inflation target. Yet, if the RBI holds rates at this level, it could entrench high inflation.

Third, a hesitation to raise rates would contribute to financial fragilities with asset mispricing. Fourth, it is important to understand that monetary policy can’t work without any growth sacrifice, even though from a political economy perspective, central banks find it hard to state this in their communication.

The quantum of the end-September rate hike can go a long way in delivering the goal to disinflate the economy — as monetary transmission gains traction with the large rate hike occurring for the first time after the system has moved away from large liquidity surpluses.

Banks have been unduly reluctant to lift deposit rates while pass-through has been more on the lending side mainly because of the large surplus liquidity. Their net interest margins have been protected at the expense of savers. Against a 140 bps rate hikes since May this year before the latest hike, the weighted average lending rate against the outstanding rupee loans rose by 41 bps, while the weighted average term deposit rates on outstanding domestic rupee deposits increased by just 26 bps.

Considering the RBI’s projected average inflation rate of 6.7 per cent, the weighted average real rate on the lending side works out to 2.43 per cent (1.63 per cent for fresh rupee loans which has risen by 82 bps in this hiking cycle), while that on the deposit side remains at (-)1.41per cent (see chart).

While the RBI in its post policy communication sought to talk down the liquidity fears by explaining that liquidity is not too tight, the fact is that sans government balances system liquidity that sets the money market rates is temporarily in balance. Yet, durable liquidity surplus that includes government cash balance was ₹3.69 lakh crore on the eve of the latest policy.

Once festival currency leakages and more foreign exchange interventions take place, the durable system liquidity could tighten further and may hover at less than ₹1 lakh crore. Should the central bank worry too much about these tighter liquidity levels? Why should it when, in fact, it will force banks to raise deposit rates and accelerate transmission to positive real rates at which monetary policy can be deemed neutral and not yet tight in a true sense?

At a time when we face double whammy of high inflation and spillovers of exchange rate pressures, even marginally deficit liquidity conditions will be justified as it will ameliorate both these pressures.

Will this cause a destabilising interest rate spike? Not unless the government walks off the fiscal consolidation path as electoral cycle considerations come to fore. The government has so far done well to exercise restraint even while taking supply-side measures to reduce inflationary pressures.

The author is IEPF Chair Professor at NCAER. He was formerly RBI’s Executive Director and an MPC member. Views are personal.