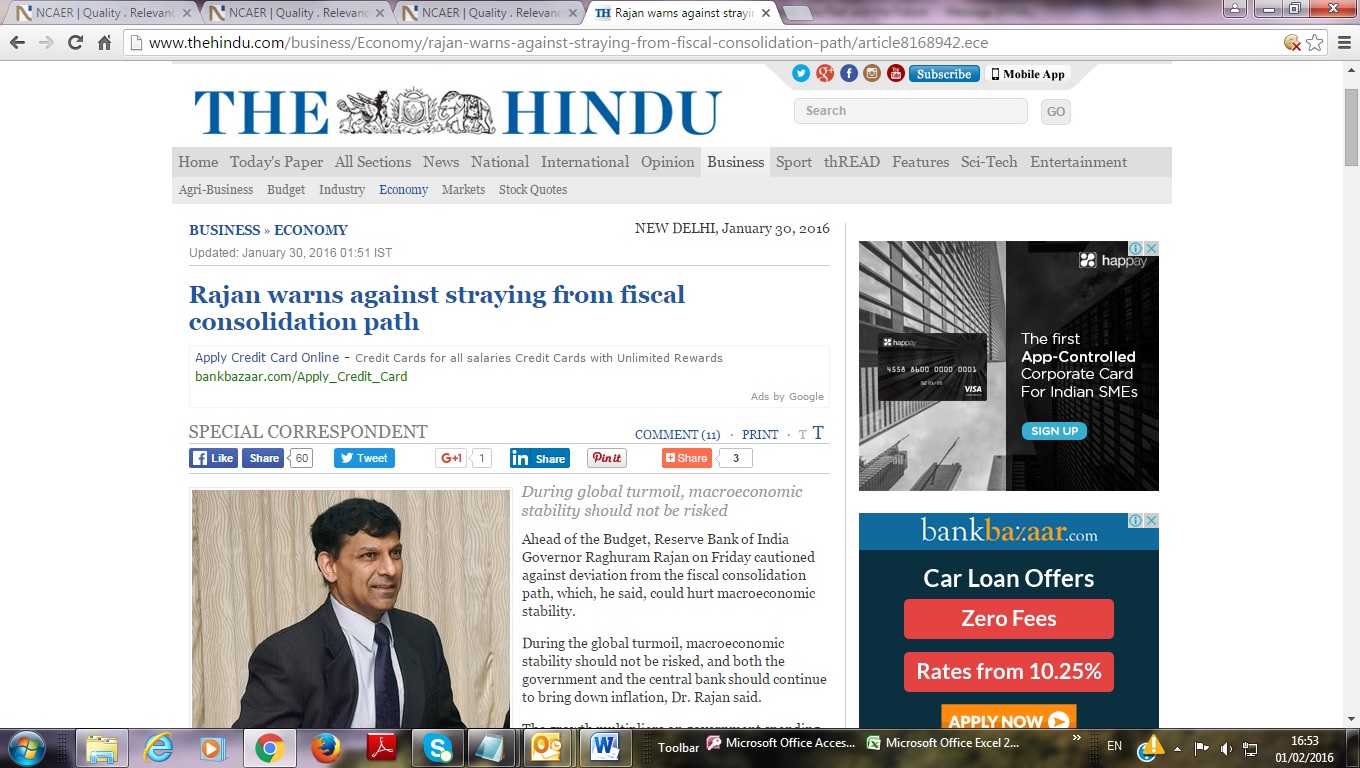 During global turmoil macroeconomic stability should not be risked

Ahead of the Budget Reserve Bank of India Governor Raghuram Rajan on Friday cautioned against deviation from the fiscal consolidation path which he said could hurt macroeconomic stability.

During the global turmoil macroeconomic stability should not be risked and both the government and the central bank should continue to bring down inflation Dr. Rajan said.

The growth multipliers on government spending at this juncture are likely to be much smaller so more spending will probably hurt debt dynamics.

“Put differently it is worth asking if there really are very high- return investments that we are foregoing by staying on the consolidation path?”

“As Brazil’s experience suggests the enormous costs of becoming an unstable country far outweigh any small growth benefits that can be obtained through aggressive policies… We should be very careful about jeopardising our single most important strength during this period of global turmoil – macroeconomic stability.”

Taking the fiscal deficits of the Centre and states the consolidated fiscal deficit for the country rose last year to 7.2 per cent from 7 per cent. “So we actually expanded the aggregate deficit in the last calendar year.”

Originally the target was to bring down fiscal deficit to 3.6 per cent of the GDP in 2015-16 but it has been postponed by a year. Now government is targeting 3.9 per cent in the current fiscal. Deviation from the fiscal consolidation path could push up government bond yields both because of the greater volume of bonds to be financed and potential loss of government credibility on future consolidation Dr. Rajan said while delivering the CD Deshmukh Memorial lecture.

A slowing in inflation has been on account of the “joint work” of the government and the RBI aided to some extent by the fall in international commodity prices he said. “This is no mean achievement given two successive droughts that would have in the past pushed inflation into double digits.”

Dr. Rajan said that it was unfortunate that despite the success on the inflation front there are voices suggesting weakening the fight against inflation.

“Let me therefore reiterate that we have absolutely no intent of departing from the inflation framework that has been agreed with the government. We look forward to the government amending the RBI Act to usher in the monetary policy committee further strengthening the framework.”

With the government’s UDAY scheme to revive state power distribution companies set to become operational in the next fiscal it is unlikely that states will be shrinking their deficits he said..

This will put pressure on the Centre to adjust more Dr. Rajan said. The NDA government had last year put a pause on the fiscal consolidation path postponing reduction in fiscal deficit target by a year.

He stressed that macroeconomic stability relies immensely on policy credibility which is the public belief that policy will depart from the charted course only under extreme necessity and not because of convenience. “If every time there is any minor difficulty we change the goal posts we signal to the markets that we have no staying power” Dr. Rajan said.