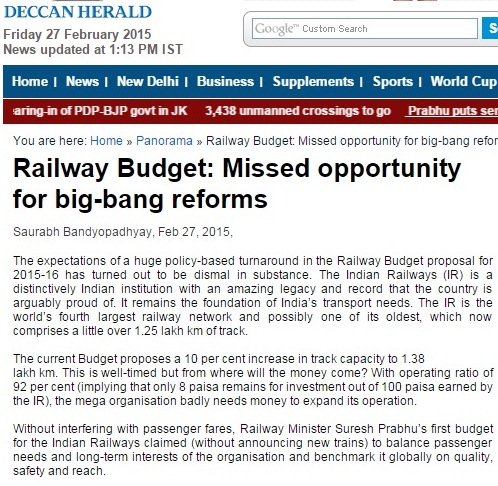 This article published in  Deccan Herald is written by Dr Saurabh Bandyopadhyay an Associate Fellow at NCAER.

The expectations of a huge policy-based turnaround in the Railway Budget proposal for 2015-16 has turned out to be dismal in substance. The Indian Railways (IR) is a distinctively Indian institution with an amazing legacy and record that the country is arguably proud of. It remains the foundation of India’s transport needs. The IR is the world’s fourth largest railway network and possibly one of its oldest which now comprises a little over 1.25 lakh km of track.

The current Budget proposes a 10 per cent increase in track capacity to 1.38 lakh km. This is well-timed but from where will the money come? With operating ratio of 92 per cent (implying that only 8 paisa remains for investment out of 100 paisa earned by the IR) the mega organisation badly needs money to expand its operation.
Without interfering with passenger fares Railway Minister Suresh Prabhu’s first budget for the Indian Railways claimed (without announcing new trains) to balance passenger needs and long-term interests of the organisation and benchmark it globally on quality safety and reach.
The admission by Prabhu that facilities have not improved for the past few decades and continuous under-investment affected its capacity leading to vicious cycle for a long time needs some elaboration. Why did the condition come to such a pass? Each budget thronged with loads of proposals without assessing the ground reality that the Railways itself is a patient and strong doses of medicine are required urgently to rectify the scenario.
What are those treatments? First the railways need a pragmatic situation analysis that is contradictory to popular (and political) belief that passenger’s do not like hike in passenger’s fare. The National Council of Applied Economic Research (NCAER) survey report (2013) clearly demonstrated the fact that even the poorest passengers (aam admi) are ready to pay ‘extra’ for quality service and safety.
The survey clearly brought out the fact that travel demand by railways is ubiquitous across different categories of households and that a significant proportion of the passengers expect an efficient and well-maintained railway service for which they are willing to pay more. Hope the proposal on increased investment in the overloaded railway network to Rs 8.5 lakh crore over the next five years would be a strong step in that direction.
Second there is a statement regarding improving the operating ratio. Year after year the revenues earned by the railways was pumped into unproductive (eye-catching) schemes and enormous overheads. This Budget proposes that the proportion of rail revenue available for investments would be an ambitious 11.5 per cent in 2015-16. Up from 8.2 per cent in the current fiscal this is an appreciable pronouncement but how this would be achieved is not spelt out in details.
The minister talked about monetising the huge railway assets and revamping of the PPP cell for a result-oriented action. However all these did not wholeheartedly relate to the vision of railway reform.
Throughout Europe and in many other countries railways have at least two features in common. First they are organised as state-owned monopolies with infrastructure and train operations vertically integrated and second they face harsh competition from other modes of transport. This was the case with Sweden till the country’s railway system was restructured in 1988.
Two central features of the Swedish railway industry’s structural change were (a) the separation of infrastructure from train operations and (b) the commercialisation of train operations. The gradual reform what Sweden did to restructure its own railway system could have been an avid example for India to initiate a process of change.
The separation of railways into two interdependent functional units one responsible for infrastructure maintenance and the other for commercialisation of marketing and train operations was conceived to put an end to deficit railway operations; to put railways at par with other modes of transport with respect to infrastructure costs; to acknowledge the safety and environmental qualities of the mode; and also to safeguard various aspects of regional income distribution. Nothing of this sort figured in the current Budget. Only referring to the pet schemes won’t serve the vital purpose.
Railway transport services
The eventual target of the reforms should be to improve railway transport services. The higher efficiency generated by the railway sector would embrace a larger range of markets they can successfully compete in. Rail freight services are the key ingredients to production trade and distribution of bulk and other semi-bulk materials. With regard to passenger services railways can achieve valuable economic and social character in the dense inter-city corridors for suburban transport in major cities and sufficiently populated rural areas.
The NCAER in ‘Indian Railways Report 2001: Policy Imperatives for Reinvention and Growth’ headed by Rakesh Mohan clearly stated what Prabhu observed today. “Indian Railways over the past decade has fallen into a vicious cycle of under investment misallocation of scarce resources increasing indebtedness poor customer service and rapidly deteriorating economics. Financial crises will rapidly follow the absence of forthright action.”
The underlying motivation should also be to develop a better understanding of demand as an input into more rational pricing policies. Over the years IR pricing has been driven by a mixture of legacy politics and ad hoc pronouncements resulting in pricing policies that are some of the most distorted in the world.
They are one of the lowest fare-to-freight ratios largely ignoring economic principles linking costs market demand and prices. The current Budget missed the golden opportunity to review the existing tariff mechanism. Inappropriately the same has been continued albeit little hopes on the service standard expectations and usage patterns.
Published in: DECCAN HERALD, February 27, 2015
Download