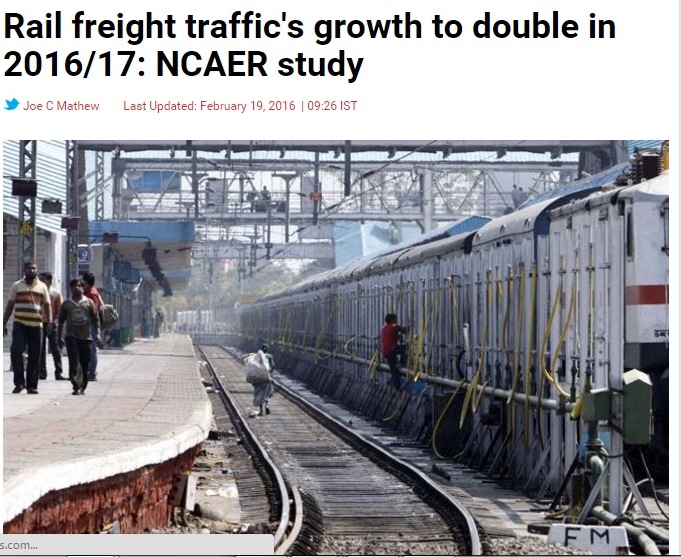 In a study carried out for the railway ministry NCAER states that the growth will happen on a business-as-usual situation without any major policy shifts.

“Indian Railways’ freight volume is likely to grow by 2.1 per cent in 2016/17 as compared to 1 per cent growth in 2015/16” it states. Freight accounts for nearly two-thirds of Railways’ revenue spread over two broad categories: bulk and other goods.

The study notes a number of commercial operational and policy-related issues that could have an impact on IR’s freight traffic.

“The NCAER study shows that there is tremendous untapped potential for improving IR’s freight business if it can begin to meet the growing competition from the road sector. The railways need to compete on price punctuality and predictability the keys to a successful logistics business” said Shekhar Shah Director-General of NCAER.

Railway’s freight charges have gone up by 67 per cent in the past five years while there has been a decline in fuel prices. Road transport for freight has now become much cheaper than rail.

Among the policy reforms suggested by the NCAER study are correcting the fare/freight ratio; providing for periodic reviews of surcharges like the port congestion surcharge and busy season surcharge; steps to encourage short lead traffic; a review of the dual pricing for iron ore; review of transportation product design to cater to market requirements of smaller parcel sizes; and liberalisation of two-point and three-point loading rules

The short-term study did not go into tariff issues but a longer study is planned in the future to look at tariff price sensitivity and cross-subsidisation issues.

The NCAER study finds that there are several reasons for the nearly flat growth in IR’s freight business in 2015/16. The Indian economy has been passing through a difficult and challenging time since 2014/15.

Deficient rainfall and two drought years in a row have lowered rural demand. Industry too remains sluggish due to low investment demand. Services which have been a key driver for growth have also not remained immune to the slowdown.

Alongside industry growth in gross value added in 2015/16 for the mining and quarrying sector railway’s largest client is estimated to be 6.9 per cent as compared to 10.8 per cent in 2014/15. Crucial components of core infrastructure coal steel cement and electricity also showed a decline in their growth rate for April-December 2015 as compared to their performance in 2014/15.

The Railway Board requested NCAER for this short-term study to focus on Indian Railway’s freight business and to identify the reasons for the recent plateauing of its growth to around 1 per cent per annum for bulk freight commodities including coal iron ore cement steel fertilisers and food grains and container traffic.