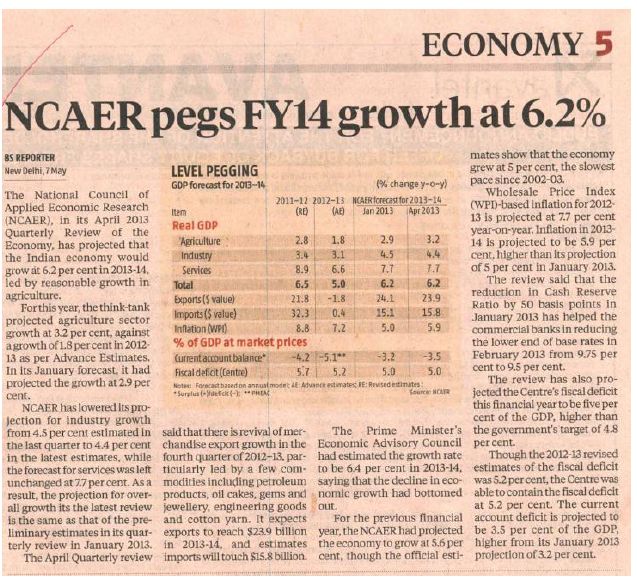 The National Council of Applied Economic Research (NCAER) in its April 2013 Quarterly Review of the Economy has projected that the Indian economy would grow at 6.2 per cent in 2013-14 led by a reasonable growth in agriculture.

For this year the think tank projected agriculture sector growth at 3.2 per cent against a growth of 1.8 per cent in 2012-13 as per Advance Estimates. In its January forecast it had projected the growth at 2.9 per cent.

The NCAER has slightly lowered its projection for industry growth from 4.5 per cent estimated in the last quarter to 4.4 per cent in the latest estimates while the forecast for services was left unchanged at 7.7 per cent. As a result the projection for overall growth its the latest review is the same as that of the preliminary estimates in its quarterly review in January 2013. 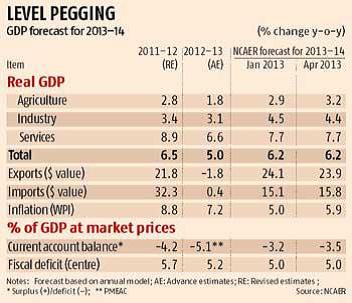 commodities including petroleum products oil cakes gems and jewellery engineering goods and cotton yarn. It expects exports to reach a value of $23.9 billion in 2013-14 and estimates imports will touch $15.8 billion.
The Prime Minister’s Economic Advisory Council (PMEAC) had estimated the growth rate to be 6.4 per cent in 2013-14 saying that the decline in economic growth had bottomed out.

For the previous financial year the NCAER had projected the economy to grow at 5.6 per cent though the official estimates show that the economy grew at 5 per cent the slowest pace since 2002-03.

Wholesale Price Index (WPI)-based inflation for 2012-13 is projected at 7.7 per cent year-on-year. Inflation in 2013-14 is projected to be 5.9 per cent higher than its projection of 5 per cent in January 2013.The review said that the reduction in Cash Reserve Ratio by 50 basis points in January 2013 has helped the commercial banks in reducing the lower end of base rates in February 2013 from 9.75 per cent to 9.5 per cent.