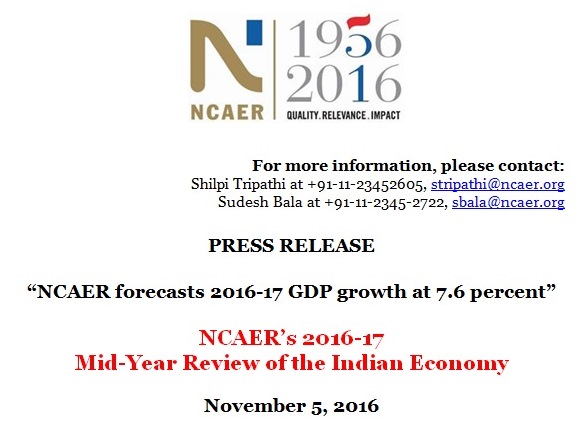 The National Council of Applied Economic Research released its 2016-17 Mid-Year Review of the Indian Economy (MYR). The MYR presents the most comprehensive independent assessment of the Indian economy as the Indian Government and its Ministry of Finance begin preparation of the FY 2017-18 Union Budget.  . The MYR remains a tribute in a long standing partnership with the India International Centre to one of India’s most prominent post-Independence economists Dr Malcom S. Adiseshiah.

Key highlights of the MYR:

GDP Growth: NCAER places overall 2016-17 GDP growth (GDP at market prices) in constant 2011–12 prices at 7.6%. On one hand the anticipated improvement in the agricultural sector and the associated increase in rural demand will give an upward push to economic growth. The manufacturing sector is also giving positive signals with the Purchasers’ Managers Index and Index of Industrial Production for core sectors and auto sales going up. The domestic aviation sector growth continues to be robust. However other service index indicators continue to be muted.  Food inflation is also showing signs of dampening in the latter part of the second quarter.  However fuel inflation may revive. Although urban demand is predicted to remain strong external demand continues to be volatile.

Agriculture: Unlike the past two years this year witnessed a normalisation in rainfall at just short of the 100% long period average. The actual rainfall measured as an index on the basis of un-irrigated area under foodgrains as weights was 1.5 per cent above its normal level. Consequently the area under kharif sowing is about 3.5% more than last year with the sowing of pulses being about 29.1% more than last year. Thus our estimates show that the output of kharif foodgrains is expected to reflect an increase of 10 per cent to 11 per cent over last year’s output of 124 million tonnes.

Services: The growth of the services sector growth remained more or less stable in Q1 of FY17. But in a break from the past public administration defence and other services led the growth in the services sector with a growth of 12.3% up from 5.9% in the comparable period during the last fiscal. Contrary to this growth in activity in the services sector declined in September 2016. The Nikkei India Services Business Activity Index fell to 52 in September 2016 down from 54.7 in August (a reading above 50 shows expansion while a number below 50 shows contraction).  Furthermore construction sector activity GVA growth in trade hotels and transport slowed down. However tourist arrivals increased sharply in July and August 2016 to 17.1% and 11.8% respectively.

Inflation: After a sequential uptick in inflation in the initial months of FY17 to 6.07% in July 2016 it fell sharply in September 2016 to 4.31% as measured by the Consumer Price Index (CPI). After declining for 17 consecutive months the Wholesale Price Index (WPI) inflation turned positive in April 2016 remaining at around 3.5-3.7%. Food inflation was the swing element in both cases accounting for both the uptick as well as decline.

Monetary Policy: The H1 of FY17 saw a revamping in monetary policy formulation with the appointment of the new RBI governor Urjit Patel and the operationalisation of the Monetary Policy Committee (MPC). After the cautious approach adopted by the previous Governor the MPC unanimously decided to reduce the repo rate by 25 basis points. Furthermore the Governor in his post-policy briefing hinted that the inflation target of 4% would be achieved over five years. The PSU banks continued to be plagued by NPAs and the credit and deposit growth remained sluggish.

External Sector: The first half of the year looked bright on the external front with the current account deficit (CAD) being within manageable limits. India’s merchandise exports turned positive in June 2016 with exports rising at 1.27% y-o-y in June to $22.57 billion reversing the trend that started in December 2014 due to weak global demand and a fall in commodity prices. Furthermore after a decline in July and August exports grew at 4.6% in September raising hopes that the decline period in Indian imports is coming to an end.

Fiscal Policy: India’s fiscal position remained under stress during H1of FY17. Despite healthy growth in tax revenues the combination of rising expenditure and lower-than-expected non-tax revenues is likely to test the Government’s resolve to abide by the fiscal deficit target set out in Budget 2016-17. According to the latest numbers released by the Controller General of Accounts the FD during the period April-September 2016 stood at 84% of the budget estimate for the year. This marks a considerable worsening over the comparable period last year when the FD stood at 68% of the Budget estimate. At 569.3% of the budget estimate the primary deficit is more than double the deficit during the comparable period last year (182%) indicating that the Government truly has an uphill task on its hands to be able to stick to the targets laid down in Budget 2016-17. Tax collections (net to the Centre) are better at 42.5% of the BE with an improvement in both direct and indirect tax collections.

Besides an independent stocktaking of the Indian economy’s performance this year’s Mid-Year Review by NCAER included two special presentations on ‘New Paradigms for Financial Sector Development in India’ and ‘Healthy Ageing in India: Situation and Challenges’. The first presentation assesses the four pillars of the financial sector in India. The second paper examines whether the Indian health delivery system is prepared to tackle the rise in communicable and non-communicable diseases among the elderly as India’s demography changes.

The National Council of Applied Economic Research (NCAER) is India’s oldest and largest independent economic think-tank set up in 1956 at the behest of Prime Minister Jawaharlal Nehru to inform policy choices for both the public and private sectors. Over nearly six decades NCAER has served the nation well with its rich offering of applied policy research unique data sets evaluations and policy inputs to central and state governments corporate India the media and informed citizens. It is one of a few independent think-tanks world-wide that combines rigorous economic analysis and policy outreach with data collection capabilities particularly for large-scale household surveys. NCAER is currently led by its Director-General Dr Shekhar Shah and governed by an independent Governing Body chaired by Mr Nandan M. Nilekani.