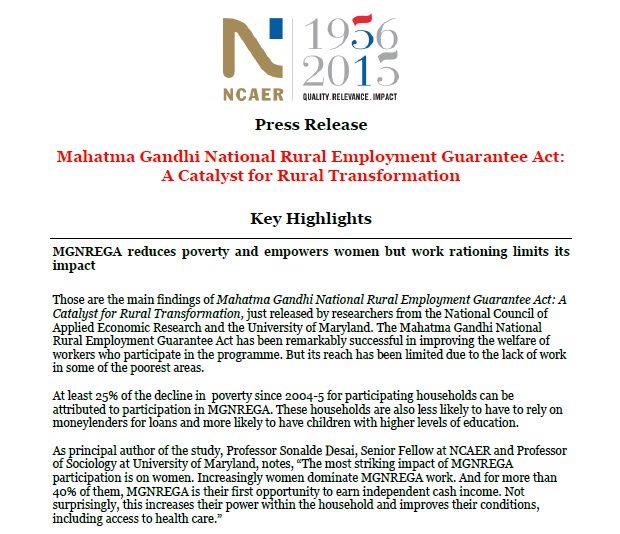 Those are the main findings of Mahatma Gandhi National Rural Employment Guarantee Act: A Catalyst for Rural Transformation just released by researchers from the National Council of Applied Economic Research and the University of Maryland. The Mahatma Gandhi National Rural Employment Guarantee Act has been remarkably successful in improving the welfare of workers who participate in the programme. But its reach has been limited due to the lack of work in some of the poorest areas.

At least 25% of the decline in  poverty since 2004-5 for participating households can be attributed to participation in MGNREGA. These households are also less likely to have to rely on moneylenders for loans and more likely to have children with higher levels of education.

As principal author of the study Professor Sonalde Desai Senior Fellow at NCAER and Professor of Sociology at University of Maryland notes “The most striking impact of MGNREGA participation is on women. Increasingly women dominate MGNREGA work. And for more than 40% of them MGNREGA is their first opportunity to earn independent cash income. Not surprisingly this increases their power within the household and improves their conditions including access to health care.”

However the positive effect of MGNREGA is limited by very low access to work in some of the poorest states such as Bihar and Odisha. Only 24.4% of rural households participate in MGNREGA nationwide and nearly 70% of the interested households cannot participate due to lack of work. Most important about 70% of households below the poverty line do not participate. Implementation challenges lie at both the state and the local level.

In states with strong programmes such as Chhattisghar nearly 60% of the poor participate in MGNREGA infrastructure projects. By contrast in states with weak programmes such as Bihar barely 11% of poor households participate. It is particularly important to ensure better implementation at the local level—both to improve MGNREGA access and to improve the quality of infrastructure.

This report is unique in that it relies on detailed interviews with over 28000 households spread across rural India. They were interviewed in 2004–05 before the initiation of MGNREGA and again in 2011–12 after the programme was implemented. As Dr. Shekhar Shah Director-General NCAER noted “As India continues its march towards economic prosperity independent rigorous assessments of this type will be increasingly required to ensure that public policy and programmes stay on the right track.”

Around the world women are paid less than men. In India in 2004–05 rural women earned only 53 paise for each rupee earned by men. But with the implementation of the Mahatma Gandhi National Rural Employment Guarantee Act in 2006 suddenly there was at least one job where men and women were paid equally. Is it any surprise that women’s participation in MGNREGA has risen sharply and today women’s share of MGNREGA work is nearly 53%?

As a new report by researchers from National Council of Applied Economic Research and University of Maryland Mahatma Gandhi National Rural Employment Guarantee Act: A Catalyst for Rural Transformation points out this has led to tremendous change in the lives of women participants. Since men and women earn the same amount for MGNREGA work but men earn far more in market-based work households often reserve their MGNREGA work allocations for women thereby increasing total household income.

The report is based on interviews with about 20000 women ages 15–49 in rural areas conducted in 2004–05 and then again in 2011–12. Omkar Joshi one of the authors notes that “about 45% of the MGNREGA women workers either were not employed seven years earlier or worked only on family farms.” Thus for many women MGNREGA is the first opportunity to earn independent cash income. This has led to broad changes in women’s lives.

MGNREGA requires a bank account for payment so in households where women participate in MGNREGA women’s access to a bank account increased by 38 percentage points—compared with 13 percentage points for their neighbours in the same village who do not participate. Their access to cash for household expenses has also increased. Whereas women from participating households initially had lower access to cash than their neighbours who did not participate by 2011–12 they had overtaken these neighbours and nearly 93% reported having some cash in hand. Their say in household decision making also improved as did their ability to get access to health care for themselves.

As Sonalde Desai Senior Fellow at NCAER and Professor of Sociology at the University of Maryland and one of the authors notes “Gender inequality in India has often made headlines. We rarely see stories about structural changes that are not strictly directed towards changing gender balance in Indian society but nonetheless empower women. MGNREGA’s positive contributions towards women’s empowerment deserve greater attention.”

“Workfare or welfare?” is the crucial question many countries are asking. While many developed countries seem to choose income support for the poor via welfare programmes developing countries like Mexico Chile and Rwanda are moving towards workfare programmes. Mahatma Gandhi National Rural Employment Guarantee Act is the largest such programme in the world. As a report evaluating the impact of MGNREGA released by the National Council of Applied Economic Research and the University of Maryland notes while economic growth has lifted many households out of poverty poverty reduction would have been at least 25% lower without MGNREGA.

MGNREGA is a self-targeting programme that assumes anyone who has access to other better-paying work will not participate. Results seem to bear this out: 30% of the poor participate compared to 20% of the non-poor. But the popularity of MGNREGA among the rural electorate lies in the fact that participation is spread throughout the income distribution with only the richest fifth and the college educated opting out of the programme. Unlike many other government programmes MGNREGA is far more likely to employ dalits and adivasis at the same income level as those from forward castes. Thus in one sense the programme is doing exactly what we expect it to do—provide backup employment to those whose options are limited.

But in spite of this success the impact of MGNREGA on household income is limited. Almost 70% of the poor do not participate in MGNREGA mostly because work is not available according to a survey of 28000 households of which only 24.4% partcipated in MGNREGA. As Prem Vashistha one of the authors of this report and Visiting Senior Fellow at NCAER notes “Work rationing seems to be pervasive with about 40% of rural households working less than the 100 days they are eligible for in spite of their desire to work.” When asked about the reason for not completing their full entitlement nearly 70% of those with unmet demand said that work was not available.

Since the Act mandates that work should be available whenever households ask for it how do we explain this unmet demand? As Sonalde Desai Senior Fellow at NCAER and Professor of Sociology at University of Maryland notes “Systemic breakdown takes places at local block and state levels.” Differential progress of states towards implementing MGNREGA is well recognised. There is little correlation between poverty levels of a state and its level of MGNREGA participation. Greater proportions of households in richer states like Tamil Nadu participate in MGNREGA than in poorer states like Bihar.

It is well recognised that lack of political commitment in within states plays an important role. But local political conditions have received less attention. The Gram Panchayat must ensure that demand for work is recorded in regular Gram Sabha meetings formulate a work plan and obtain funds from the block administration. Apathy as well as lack of experience at the local level leads to bottlenecks poor management and lack of work. These local effects persist in all states so that one village may have many ongoing projects while another nearby may have very few projects. Building capacity among local institutions is essential if this unmet demand for MGNREGA work is to be satisfied.